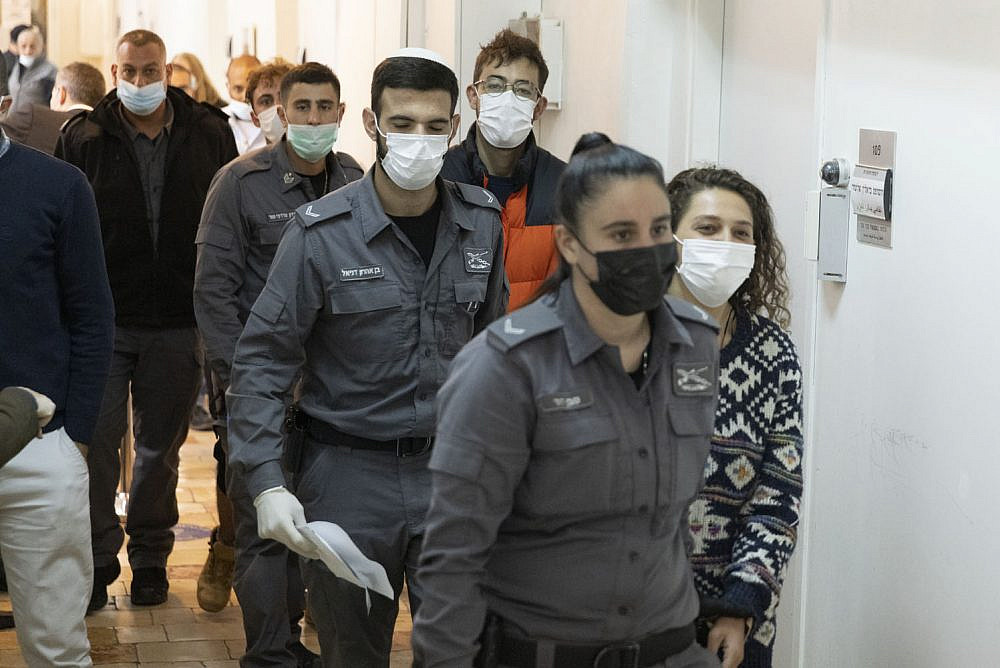 Israeli police arrested three left-wing Israeli activists Wednesday night in the village of A-Tuwani in the South Hebron Hills, after a settler said he had been assaulted by Palestinians and testified that the activists who were present at the scene did not intervene. Hours after the incident took place, the activists were summoned to give testimony at the police station, but after refusing to cooperate with their interrogation, they were turned into suspects and arrested.

Following the incident, the police raided a Palestinian home in A-Tuwani where the activists had been staying, confiscating computers, camera phones, and a car — all without a warrant, and despite most of the equipment not being suspected of belonging to the activists under arrest.

The incident began on Wednesday morning when a settler was jogging from the nearby settlement of Ma’on toward the edge of A-Tuwani. There he was stopped by a number of Palestinian residents who allegedly assaulted him. Israeli solidarity activists who have been permanently staying in the area due to increased settler and military violence were also present at the incident. The police arrived to the area after Palestinian residents from a nearby village called them upon seeing the jogging settler.

The South Hebron Hills have become a hotbed of settler extremism, and the area has seen a drastic increase in attacks on Palestinian residents, most prominently during the pogrom on the village of Mufagara, which took place in late September. Masafer Yatta, the area of the South Hebron Hills that includes A-Tuwani and 11 other hamlets, is under threat of forcible expulsion by the Israeli authorities after the army declared the area a “firing zone.” When they are not facing settler violence, residents of Masafer Yatta must deal with Israeli bulldozers, which regularly demolish their homes and livelihood. 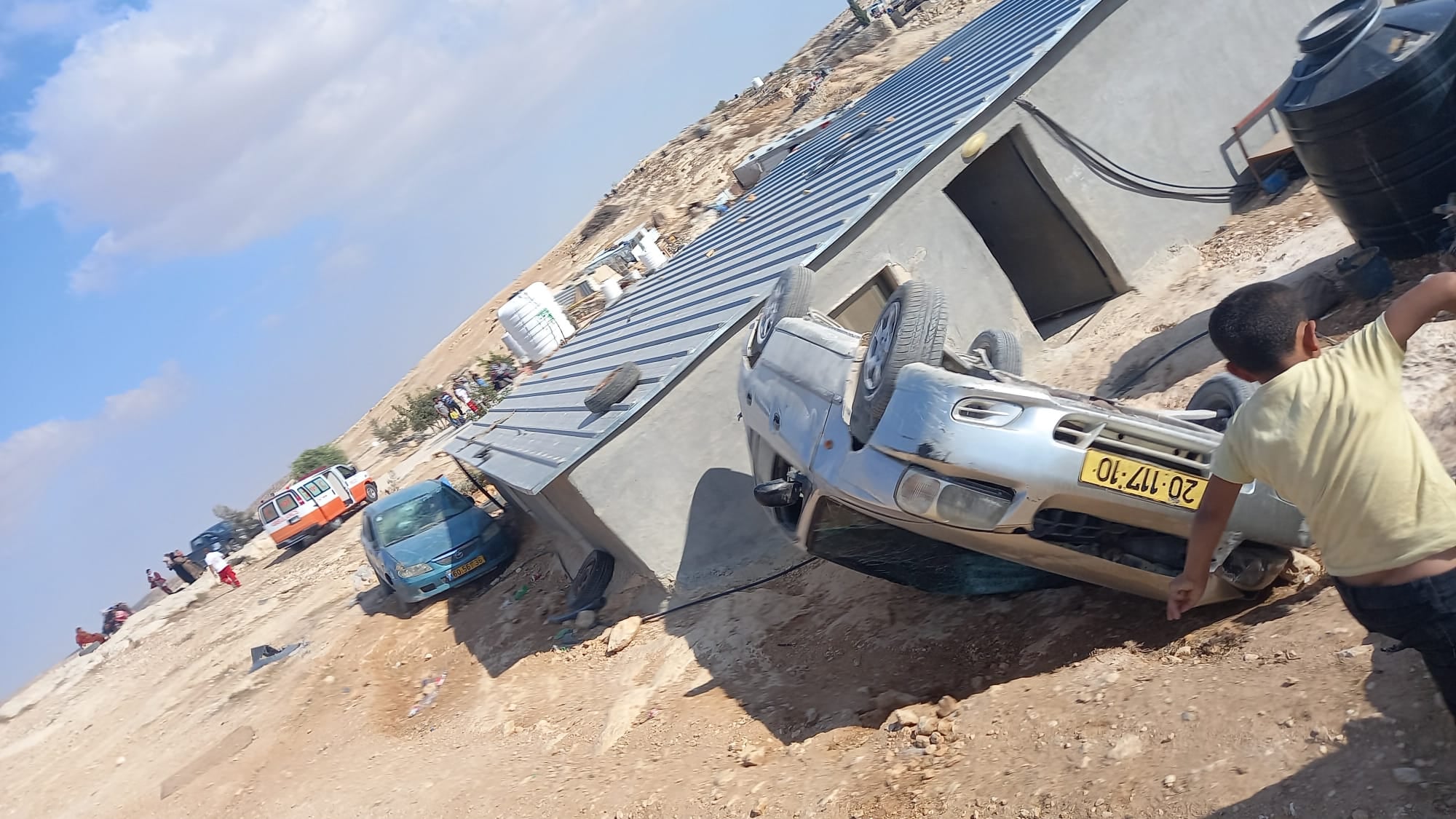 Upon arrival, the police took down the details of three Israeli activists — Yahli Chilik, Matan Kadish, and Yasmin Eran-Vardy — but refrained from arresting them. Later in the afternoon, they were summoned by phone to give testimony at the police station in the nearby settlement of Kiryat Arba. According to the activists’ lawyers, Riham Nasra and Michal Pomeranz, two of the three detainees were released without conditions and waited for their friend after providing testimony. The investigator at the station refused to accept the third activist’s testimony, accusing her of obstructing the investigation. He then banned her from A-Tuwani for 15 days.

Before the three were allowed to leave the station, the police demanded to search their cars, prompting the activists to ask to see a warrant. They were then arrested again and charged with obstructing justice, assault, and failure to prevent a crime. They were not offered conditional release and remained in custody overnight.

Meanwhile, Israeli police and soldiers raided the home in A-Tuwani in which the activists are living, confiscating cell phones and a car, according to activists who were present in the area, without providing a ledger of the items taken. The home belongs to the family of Basil Al-Adra, a journalist for +972 and Local Call, who confirmed that police and soldiers confiscated equipment that belonged to him. While settlers routinely attack Palestinians in the South Hebron Hills, the police do not raid their settlements or confiscate their personal belongings.

Dozens of soldiers are invading my home now to confiscate the cameras I use as a journalist with my friends to film the violence carried out by settlers and the home demolitions against my community in Massafer Yatta.
They took four cameras, a laptop, and memory cards. pic.twitter.com/Fca5dzIRJ7

The settler in question, Reuven Artel, told Local Call that he lives in the settlement of Ma’on and that jogging is his hobby, and that despite telling them that he had nothing to do with settler violence, he was attacked by Palestinians at the entrance to A-Tuwani while the Israeli activists filmed.

The police demanded a five-day remand for the three Israeli activists, who were brought to the Jerusalem Magistrate’s Court for a hearing on Thursday morning. Karam Munir, who represented the police in court, likened the incident in A-Tuwani to one that took place in Ramallah on the same day, in which two Jewish Israelis entered the city, upon which Palestinians attacked them and set their car on fire.

Munir refused to answer questions from the defense about the physical condition of the settler in the South Hebron Hills after the attack, describing him as a “normative person” who he said went out for a jog and was attacked by two Palestinians, while left-wing activists looked on and took photos. “Without the presence of the officers, I do not know how this situation would have ended,” Munir told the court, while refraining from mentioning that it had been Palestinians who called the police in the first place.

When asked how the police went from collecting testimonies from the activists to arresting them, Munir answered: “This was a decision made by officers who are not under my authority.” The defense then asked why the police did not immediately arrest the activists following the incident. “There was a preliminary incident, after which officers went through the details and summoned the activists to the station.” He noted that the Palestinians involved had fled, and that the three detainees arrived at the station without their phones and had refused to cooperate. Munir further stated that he had “no indication” as to whether there was a search warrant for the home in A-Tuwani, but noted that security forces were allowed to conduct a search even without one. 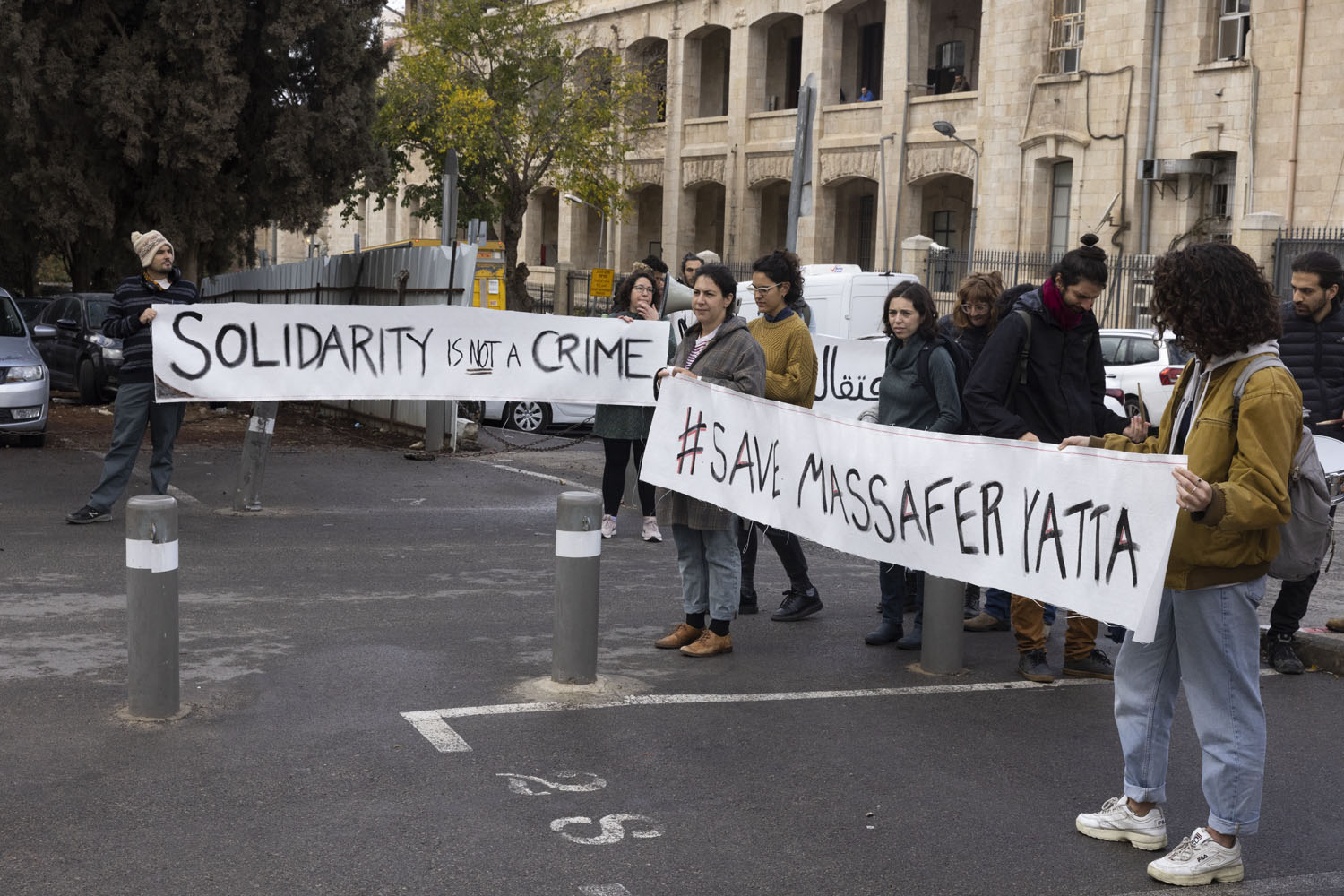 Left-wing Israeli and Jewish activists demonstrate outside the Russian Compound in Jerusalem to protest the arrest of three anti-occupation activists in the South Hebron Hills, December 2, 2021. (Oren Ziv)

The judge rejected the police’s demand to extend their remand, instead sentencing the three activists to house arrest until Sunday, banning them from contacting others involved in the incident or entering A-Tuwani for two weeks, and forcing them to pay a fine of NIS 5,000. Following an appeal on Thursday afternoon, the Jerusalem District Court overturned the Magistrate’s Court far-reaching restrictions, noting that there was no justification to keep the activists under house arrest or ban them from A-Tuwani.

“It is clear that this arrest is an attempt to inflate accusations in order to intimidate and deter activists, to prevent them from continuing their important activities,” said Atty. Riham Nasra. “They were turned into suspects only because they did not cooperate with the investigators’ attempts to indict them. From the hearing it is clear that the activists were never suspected of involvement in the attack. Their arrest is part of the attempts to keep the activists out of the South Hebron Hills, where they expose the atrocities of occupation and human rights violations.”

Maya, an Israeli activist who was in A-Tuwani during the raid on the al-Adraa home, says she was outside when soldiers asked to search her car. “I went inside to get the key. At that moment they broke into the house. They did not have a warrant and they refused to document what they took.” Maya was then taken in for questioning on suspicion of obstruction of justice and was released at night after agreeing to a 15-day ban from the area.

The incident comes just days after Jerusalem police repeatedly raided the apartment where Maya lives along with two other left-wing Israeli activists, on the grounds that one of the tenants was suspected of spray-painting pro-Palestinian graffiti. “I was there when the police raided our apartment, they behaved differently, they had come with a warrant.” Maya called Wednesday evening’s raid on A-Tuwani an “escalation,” saying that until now, activists there had not been persecuted for their solidarity activities in the South Hebron Hills.