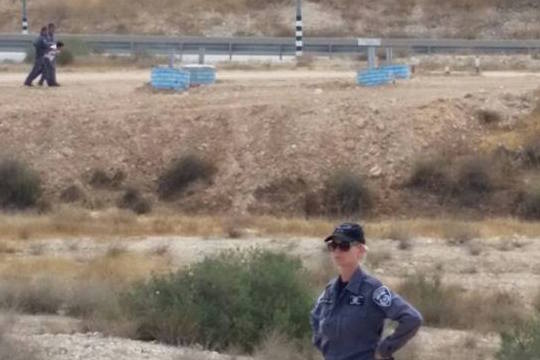 Two children, 12 and 13, were arrested in the unrecognized Bedouin village of al-Araqib in Israel’s south on Monday, as the Jewish National Fund (JNF) entered the village accompanied by police forces to resume cultivating land for a forestation project. Another youth was also arrested Tuesday morning, the circumstances of which are still unclear.

After a long and successful struggle to stop the JNF from cultivating the remaining plots of land that have not been destroyed, authorities returned this week, even establishing a camp southeast of the village’s cemetery.

Two minors were arrested for allegedly disrupting police conduct and assaulting an officer; they were released the following day and ordered to keep away from the plots for 30 days.

Al-Araqib has been demolished 100 times since July 2010. It is one of 35 “unrecognized” Bedouin villages in the Negev desert in southern Israel, which means Israel refuses to provide residents with connections to the national water and electricity grids, provide them with health and educational services, or any basic infrastructure.

Despite being citizens of Israel that are supposed to enjoy equal rights, the Israeli government and institutions such as the Israel Land Authority and Jewish National Fund have been waging a slow and methodical war of attrition against Bedouin residents of unrecognized villages in an effort to expel them.

As a result most of al-Araqib’s residents have indeed left to neighboring towns over the past several years. The tactics used by the state against these citizens are similar to those used in Area C of the occupied West Bank, where Palestinian residents have no rights, no representation, and their homes are repeatedly demolished.