An attempt on Friday at reestablishing last summer’s protest was met with a heavy hand by the police. Daphni Leef, who set up the tent that sparked last year’s movement and whose call brought out hundreds on Friday, was violently detained in a sign of a shift in the protester-police dynamic. 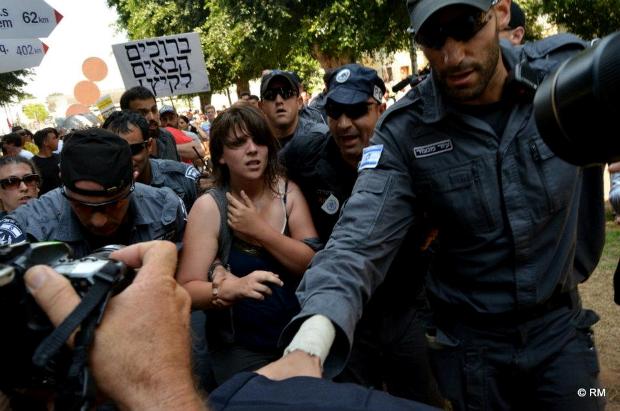 Update: At least ten protesters have been arrested, including Daphni Leef and Israeli actor Tomer Sharon, who had joined the protesters. The crowd stayed on, and Hadash MK Dov Khenin and Meretz MK Nitzan Horowitz arrived. Activists announced plans for a march leaving from Rothschild Boulevard at 9 p.m. on Saturday night, declaring “there is momentum here we have to take advantage of.” They also passed out fliers inviting citizens to a no-confidence vote against Tel Aviv Mayor Ron Huldai at the Tel Aviv municipality at 5:30 p.m. on Monday. Scattered attempts into the evening to set up tents were met with immediate police response, with officers and municipal inspectors pouncing on and confiscating the tents. 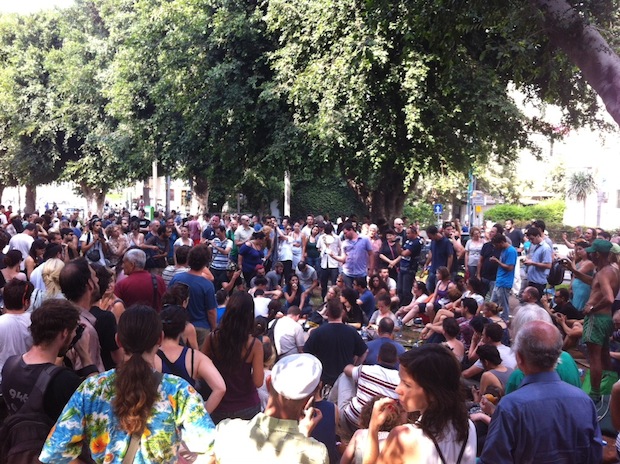 Tel Aviv – Several hundred people in central Tel Aviv mounted their most determined attempt yet to resuscitate the social justice protests of last summer. This time, the woman who sparked those demonstrations – Daphni Leef – attempted to once again plant a tent on Rothschild Boulevard, where it all began. But this year, the municipality, which largely sought to appease and contain the protesters last summer, was equally determined to refuse the protesters so much as a foothold. A cocktail of police and municipal inspectors first told the crowd that every tent that was placed on the ground would be confiscated and destroyed; the protesters resorted to carrying the tents on their shoulders, taking shifts to keep them aloft. Indeed, scattered attempts into Friday evening to set up tents were met with immediate police response, with officers and municipal inspectors pouncing on and confiscating the tents.

Leef herself, who in an interview to Israeli media yesterday said she hoped Tel Aviv’s pro-free market mayor, Ron Huldai, would not use force, was violently arrested by nearly a dozen riot police officers. One eyewitness on the ground told +972 that Leef was “beaten, dragged on the ground from one side of the boulevard to the other, and shoved into a police van.” As of 3 p.m. Israeli time, the crowd at the scene was blocking the van, not letting it leave for the police station, and demanding Leef’s release. This could mark a change in dynamic between protesters and the police, who were relatively tolerant toward each other in last year’s protests. Then, protesters were keen to reach out to the undertrained and underpaid police officers, who are banned from forming any kind of union under Israeli law.

Update II: J14 activists are planning a march in Tel Aviv this evening (Friday) and a larger vigil tomorrow evening, in which they would also protest the police behavior and the arrests of demonstrators. MK Dov Khenin (Hadash) has demanded an investigation of “the excessive use of force” against protesters in Tel Aviv today. Leader of the opposition, MK Shelly Yechimovitz (Labor), posted a status on her Facebook page in which she blamed the government for the treatment of protesters. 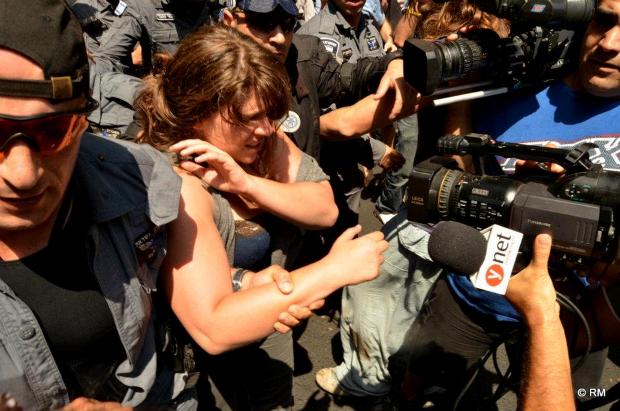 The wider social justice movement went through a trying process of disintegration over the last year, with the centrist and moderate National Student Federation – provider of much of the logistical infrastructure and financial support last summer – staying aloof, and many of the iconic figures of the protests going their separate ways.

Police and municipality blame activists for violence towards policemen and municipal inspectors. The activists reject the claims, and reverse them, showing bruises on their hands and legs. Also, this post reports that “their most determined attempt yet to resuscitate the social justice protests of last summer.” But here were about 500 people in the street earlier – and now about 200. In the past two months there have been at least three demonstrations with between one and 15,000 people (May 12th in Rabin Square, June 2nd, and last week in Be’er Sheva).

You can see the police confiscating the tents the protesters brought in this video. Daphni’s arrest is around 4:40 min:

This video was taken on on Rothshild Boulevard before the arrests began:

In recent weeks, Israeli activists and known members of the J14 movement were invited to police questioning about their plans for this summer. Following public outcry, the police stopped this practice. Among those summoned to the Tel Aviv police headquarters was +972’s Haggai Matar, who later published a post on his experiences:

I showed up on time at the police station in the morning before the recall order was issued, having already planned to stick to my right to remain silent. I was marched into a tiny room with two policemen from the district intelligence unit, who surprised me completely with what was perhaps one of the shortest interrogations in history.

“Please sit down. Want something do drink?” asked one. “No thanks,” I replied. “What do you do in life, Haggai?” fired the second. I decided that it would do no harm to answer this question, and immediately afterwards inform them that I did not come here to talk and that I refuse to go any further. “I’m a journalist,” I said. 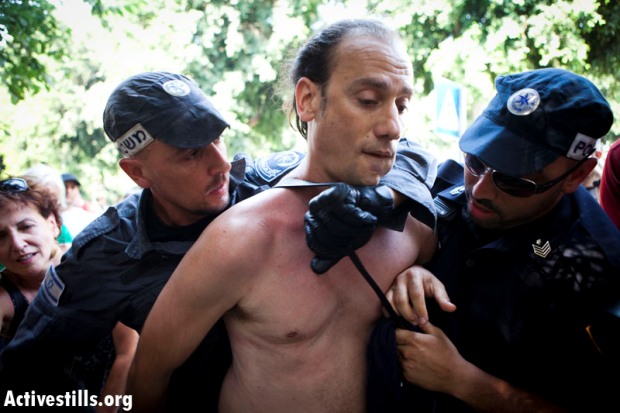 Images of the arrest courtesy of Megaphone, an Independent Israeli Newspaper. This report was compiled by Dimi Reider, Noam Sheizaf and Noa Yachot.