Some 15 activists from the organization Zochrot were besieged by police on Wednesday night in the NGO’s offices, in order to prevent them from quietly commemorating the Palestinian Nakba on Israeli Independence Day. Three were arrested for reading aloud names of destroyed villages. 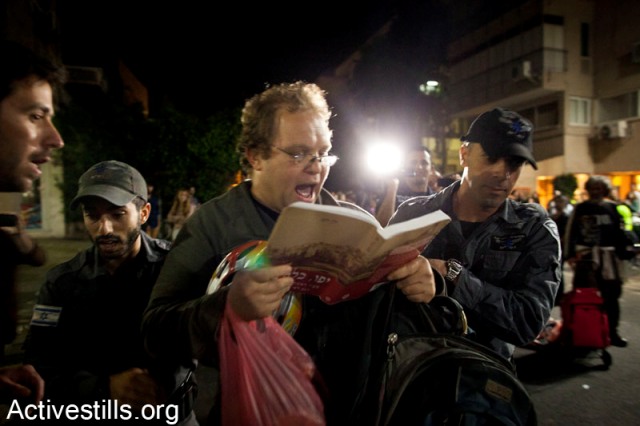 Reports started flowing in at around 22:30 p.m. through text messages and phone calls. Some 15 activists from Zochrot (“Remembering”), an Israeli NGO dedicated to preserving the memory the Palestinian Nakba (catastrophe) among the Hebrew-speaking public, had gathered in the group’s offices on Ibn Gabirol Street in central Tel Aviv. They were planning a quiet symbolic action entailing placing placards with the names of villages demolished in the 1948 war on the ground in Rabin Square, the epicenter of Independence Day festivities. Actions very much like it have been carried out by the group every year on the same day for at least seven years. 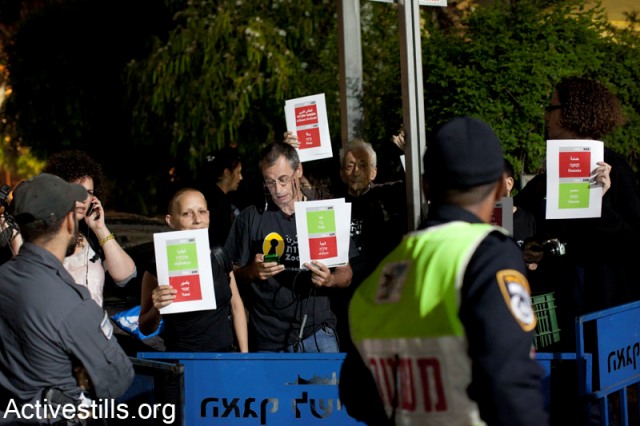 Police fences during the siege of the Zochrot office (Activestills)

However, this time the activists were surprised to see riot police forces building up a barricade around the building while they were inside. When they tried to leave for their quiet ceremony, activists were told by high ranking officers on the site that they are forbidden to do so, and that anyone trying to skip over the fences would be immediately arrested. “They said their goal was to prevent us from disturbing the peace,” says Liat Rosenberg, Zochrot director. “We were held captive for about four hours, and were told we could only leave if each and every one of us shows an ID, turns in all [protest-related] materials, and goes through an interrogation and a physical search. Attorney Gabi Lasky told police that they are unlawfully imprisoning the activists, but they refused to stand down.”

(Update: Short clip in Hebrew showing a man reading out the names of Palestinian villages on which Tel Aviv was built. A riot police officer tells him he is violating the peace, and he is quickly arrested while continuing to chant the names. Shot by: Aviv Sela)

Other protesters on the scene said they were asked to sign a form in which they vowed not to “distribute propoganda” or to disturb the peace. “It’s amazing that a small, quiet action of little more than ten people can be considered a violation of the peace, while the whole street is filled with masses of drunk people celebrating,” said another activist. 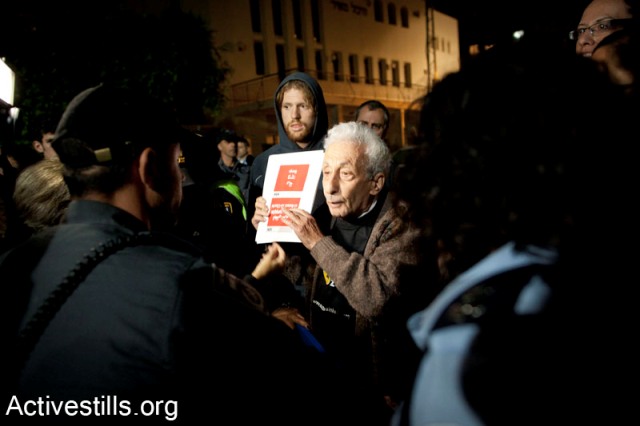 As the news spread, a small demonstration of several dozen activists formed in solidarity with Zochrot outside the police barriers. When demonstrators on both sides of the fence started reading out aloud the names of destroyed villages – the refugees of which are still living in refugee camps in neighboring countries, Gaza and the West Bank – police started beating them and making arrests. By the end of the night, three were taken to the local police station, and will probably be brought before a court this evening. At around 2 a.m. police relaxed the siege and allowed people to go home. Rosenberg says that Zochrot will be suing the police for its illegal conduct. 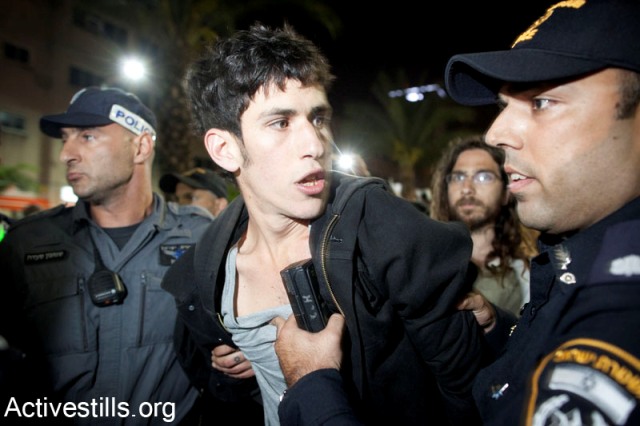 The issue of the Nakba and its commemoration is an extremely sensitive one in Israeli politics. Under the current right-wing government, a law was passed last year forbidding any state-sponsored organization from marking Israel’s Independence Day as a day of mourning, and any mention of the Nakba is kept out of schools by the Ministry of Education. Later today (Thursday), thousands are expected to march in the annual “March of Return” to some Galilee villages destroyed in 1948. 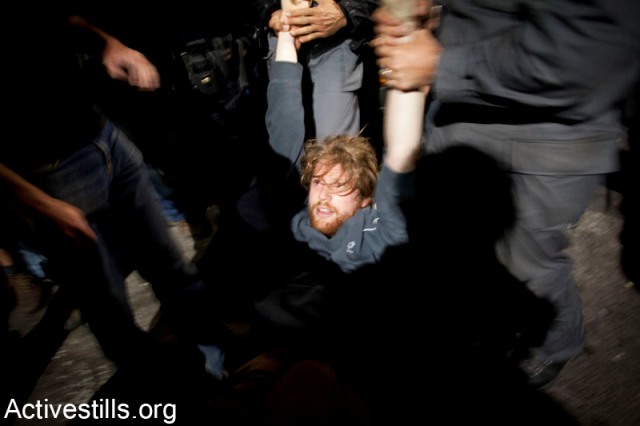