Several Sudanese and Eritrean nationals were recently arrested in two separate cases involving the rape of Israeli women and the murder of an Eritrean woman. The media extensively covered these horrible crimes, followed by a long line of politicians quoting frightening police claims that Africans account for 40 percent of Tel Aviv’s crimes. Those politicians are led by Interior Minister Eli Yishai, who dared to say in an interview this week that most “African infiltrators are criminals.”

The press similarly reported in early May that “asylum seekers are involved in 40 percent of crimes,” relying on police figures recently presented to the government. This statistic is shocking, but not as shocking as the fact that senior Israel Police officers are willing to tell lies in an effort to gain a chunk of the huge budget that the government has allotted to the war against African refugees.

Real police data, presented in a meeting held by the Knesset Committee on Foreign Workers on March 19, indicate that the crime rate among foreigners in Israel stood at 2.24 percent in 2011 (1,223 criminal cases out of a total of 54,497 foreigners). This figure is slightly higher than the figure that the police reported to the Knesset in 2010 (2.04 percent), but lower that the crime rate reported in 2009 (2.4 percent).

The 2011 data on Israeli crime has not yet been published, but according to police data reported to the Knesset, the crime rate among the general population in Israel stood at 4.99 percent in 2010. This figure demonstrates that the general crime rate in Israel is more than double that of Africans in Israel. A senior police figure claimed in a hearing held by the Knesset Committee on Foreign Workers in March 2012 that the African communities in Tel Aviv are a source of a sharp increase in crime. However, the Knesset Research Center notes that based on 2010 crime rate data, a criminal case was opened for one of every 16 residents of Tel Aviv, but only for one of every 96 “infiltrators” – the term government officials use to refer to asylum seekers who enter Israel from the border with Egypt.

There is no doubt that Israel’s police faces major challenges in dealing with criminals. There is no doubt that some refugees commit crimes, and that their crime rates may increase alongside poverty rates, if the state maintains its current policies that violate the rights of asylum seekers. The police should thus invest some of its limited resources to work on reducing existing crime rates, rather than presenting misleading data on crime rate among immigrants.

Not only are data manipulated, but police have also been known to lure the refugees to steal. Officers leave open purses on streets near the Tel Aviv Central Bus Station, as well as bags on the beach, in an attempt to entice the refugees. Instead of fighting crime, it is creating it, by entrapping refugees to commit crimes and turning its creations into shady statistics and media reports.

For the residents of southern Tel Aviv, where most of the refugees are concentrated, official crime rates undoubtedly do not matter. Their subjective feelings of fear are understandable. The irresponsible statements of senior police chiefs, together with the media coverage of actual incidents and the speeches of ministers and MKs, lead the residents to believe that almost all Africans walking the streets are criminals. This belief, and the fact that the streets of their neighborhoods are indeed filled with African newcomers, leads residents of the neighborhoods to the painful conclusion that the authorities are abandoning them. 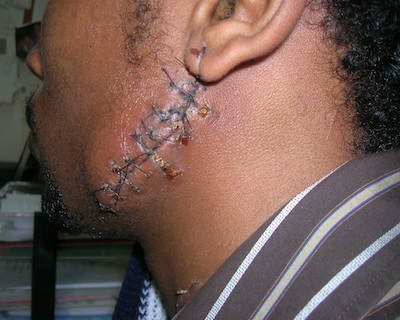 An Eritrean refugee who was attacked by two men in Netanya on Independence Day. The men said nothing to him before attacking him. (photo: Sigal Rozen)

But this discourse has dangerous implications. In the last month, the number of hate crimes carried out by Israelis against Africans has risen tremendously. Multiple Molotov cocktails were thrown into houses of Africans in southern Tel Aviv on two separate occasions, a week apart. One Israeli resident of Shapira neighborhood has been arrested and charged. Countless Africans reported to the Hotline for Migrant Workers the violence and abuse they suffer at the hands of Israelis, several requiring hospitalization as a result of the brutal attacks. The government incitement has also targeted human rights organizations assisting the refugee community. As a result, both Messila, a Tel Aviv municipality organization providing welfare services to migrant children, and the Hotline for Migrant Workers have been threatened. This week, the Hotline for Migrant Workers received phone calls from a man who stated to a volunteer who answered the phone: “I want your address so I can burn you, to do to your daughters what they’re doing to ours, you bitch.”

Africans who are involved in crime should be tried and sentenced like all other criminals. Yet these other examples of violence and hate crimes are to be blamed on the police and politicians who are so eager to get rid of the African refugees that they ignore the horrible damage they cause with their lies. If this trend continues, more and more Israeli residents will be pushed to take the law into their own hands, believing that in doing so they are defending their society from an imaginary threat.

Sigal Rozen is the Public Policy Coordinator of the Hotline for Migrant Workers, which she helped found. She has been active on behalf of asylum seekers for the last 13 years. Orna Dickman translated this post.