Adalah attorney witnesses the child being beaten inside police car, says the 14-year-old minor is accused of holding – and not throwing – a stone.

Protests against the Prawer Plan, especially the central protest in the southern town of Hura, made it to top headlines on all Israel media sites last night, showing mostly the violent end of what began as peaceful protests. What wasn’t reported was the violent arrest of a minor, a 14-year-old Bedouin child, who can be seen in the photo below being dragged with a gun pointed at him, and in the video below (released by Ehna TV) being dragged on the street by his shirt and shoved into a police car. All this despite efforts by the protesters there, including MK Ahmad Tibi, to stop the arrest on the grounds that he is just a child. 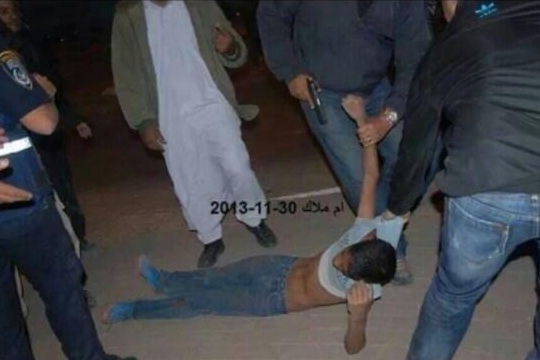 Bedouin child being dragged and arrested by police during anti-Prawer demo in Hura, Nov 30, 2013 (Umalek/Adalah)

MK Ahmad Tibi told +972 the police were violent at the protest in Hura and that their brutality was captured in the images now circulating around the world. “The whole world is now seeing this picture. They will all see this, and that is good.”

He says he saw Mista’arvim (special Israeli undercover units disguised as Arabs) arresting the child and instinctively tried to grab and pull him free, but was prevented from doing so. The Arab-Israeli member of Knesset said he was pushed by several cops and ended up lightly injured on his arm, his watch broken. He can be seen in the video screaming at them, “he’s just a kid!”

According to Aram Mahamid, a lawyer from Adalah who witnessed the arrest, police arrested the child because they claim he held (not threw) a stone, and because he supposedly attacked a police officer (a claim which, if you watched the video, seems absurd considering the size of the policemen and gear they are strapped into, compared with this scrawny little kid).

Mahamid told +972 that he saw with his own eyes the child being dragged by police and then beaten after he was already inside the car, in police custody. At the time of this report, Mahamid said the child had been held in the Be’er Sheva police station since the previous night, left handcuffed in the hallway for almost the entire time and was forced to sleep on the floor.

Mahamid said the child will see a judge Sunday afternoon and that in the meantime, Adalah is submitting a complaint to the Department for the Investigation of Police (DIP).

Asked about the violent and illegal arrest of this child, and the conditions he was held in, Mahamid said, “Yesterday was a day they [the police] decided there are no laws.”

Other videos and photos of police violence have been circulating from the protests that took place in East Jerusalem, Haifa, Tireh and in Ramallah and Jaffa yesterday. In one video from Haifa, multiple riot police officers can be seen kicking a protester on the ground.