The Bedouin village of Al-Araqib was destroyed for the 9th time on Sunday morning in the wasteland of Israeli democracy. Today police forces were back in Al-Araqib destroying make-shift structures which had been erected over night. Villagers resisting the takeover have been arrested and beaten, with eyewitnesses reporting use of sponge bullets. Based on villagers’ and activists’ accounts, the state is planning a major offensive to erase the village once and for all in order to make room for a forest to be planted by the Jewish National Fund (JNF). 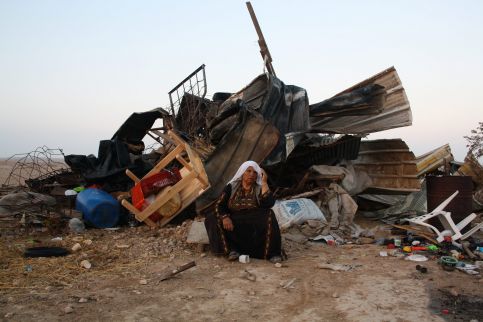 A Bedouin woman sits in front of her rebuilt home in al-Araqib after it was destroyed by Israeli forces, again. (Joseph Dana)

As I write this, a group of Israeli citizens are standing in their family graveyard. The graveyard has stood in the same spot of land in the middle of Negev for the past eighty years. If they leave the area of the graveyard, they will be arrested. They remain in the graveyard watching their village being destroyed in front their eyes. Israeli activists from Tel Aviv and Jerusalem report that the police are firing sponge bullets to encourage the people to leave the graveyard. Between 6 and 13 people have been arrested for refusing to leave the village. Some of the arrested are reportedly being taken to the hospital due to police brutality during the arrests. The citizens standing in the graveyard are Bedouin and the state is erasing their village in order to plant a forest.

Since the summer of 2010, Israel has leveled the village of al-Araqib ten times. Just in the past two days, the village has been destroyed twice. According to a press release from the Israeli activists group Hithabrut-Tarabut,

The village of Al Araqib has existed for 80 years. In the early 1950’s the new Israeli state requested of the residents to leave their village temporarily, promising that they will be allowed to return to the village in six months. This promise was never fulfilled. In the beginning of the 1990’s the village residents and their descendants decided to return to their lands and to make good on the promise that was made to them. Since then the Israeli government has been using different means to try to expel them again. Among the more outrageous attempts included sending airplanes to blanket the residents’ wheat fields with toxic pesticides meant for weeds. After the High Court of Justice ruled that this method comprises a risk to health and human life, the government ceased using this method and began using tractors to uproot the young wheat sprouts. After the authorities realized that the Al Araqib residents were holding steadfast to their land and are not giving up, the government sent hundreds of heavily armed police and bulldozers to destroy the village and expel the residents by force. The first demolition was committed on the 27th of July, 2010, in which an entire fully populated village, including its houses, barns, orchards, and animal houses, was destroyed.

During the village’s destruction the police forces used large amounts of violent force, including sponge bullets (a police method of crowd dispersal) which injured eleven of the residents, one of them in his eye. This time it seems that the ILA has decided to expel the residents once and for all. This is corroborated by statements made by Shlomo Zeiser, the ILA officer in charge of inspection, in an interview with the “Walla” news website: “In addition to the ongoing work, we cleared away the debris from the previous demolitions, which were an environmental and safety hazard. At the same time, we started to prepare the place for planting, in order to protect the land there.”

Throughout the demolitions the police forces arrested a number of residents who were protesting the destruction of their homes. Parallel to the demolition, ILA personnel began to clear away the remains of the eight previous demolitions, and started construction works to level the land in order to prepare it for planting trees. Activists who arrived at the village this morning (Monday, 1. 17) in order to observe and document the events were stopped by police forces, and one of them, Professor Gadi AlGazi, a historian from Tel Aviv University and activist in the Hithabrut-Taraabut movement, was arrested by the police.