An attempt to kill a family in its sleep would force almost any police force to make an extra effort in catching the perpetrators. Not when the police are Israeli and the victims Palestinian. 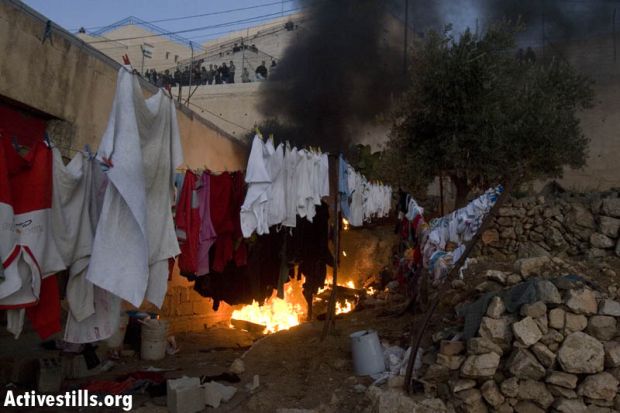 A Palestinian house burning; the fire was lit by settlers (Illustrative photo: flickr/Activestills)

Late one night in May 2012, H., a resident of the West Bank village Einbus, was awakened when he heard a noise outside his house. He went towards the window, heard dogs barking and then smelled smoke. He ran to the balcony where he noticed two things: first and foremost, his car was on fire; second, three or four settlers – in the usual pogrom attire of yarmulkes, black trousers and white shirts – were speedily making a getaway, running to the nearby outpost near the settlement of Yitzhar.

H. wanted to pursue them, but two concerns prevented him from doing so. First, they might be armed. Second, the burning vehicle was very close to the house and its flames were advancing rapidly. H. shouted and woke his father and brother. They went out to put out the fire and evacuated the rest of the family members. After some struggle – lucky for them they had a fire hydrant in the yard – they managed to put out the fire. But by the end of it the main door of the house was already burned, the car was a total loss (the damage is estimated at NIS 35,000, or about $9,500) and the front of the house was covered in soot.

You have to be an especially nasty sort of person to set a vehicle of fire near a house where people are sleeping. At best, you’re acting with total disregard for their fate. At worst, you are making an effort to murder a family as it sleeps. As a rule, this is the sort of person that police forces all over the world show a fiery interest in.

Not the Israeli police though. H. informed the police within an hour of the incident, and drove over to the Ariel police station to register a complaint. The police weren’t all that interested. They closed the case on the first of July, under the pretext that the crime was committed by an “unknown perpetrator.” They didn’t bother informing Yesh Din until August 14th.

Then, we at Yesh Din started the strange waltz in which we asked the police for the case file in order to wave it over our heads, along with a dead chicken, so as to enact a voodoo ritual which might convince the prosecution to allow us to appeal. (Note to our animal loving readers: no chickens were harmed during the updating of this case, and our appeal request was rejected accordingly.) Finally, when the police allowed us to photocopy the files on October 29th, it was over a month after the deadline for the appeal. To add insult to injury, it turned out that though our representative had come to the police station with the understanding that he could photocopy 17 files, only six files were actually approved for copying, and even that took place after an unusually long delay, caused inter alia because the Ariel police station’s photocopy machine was out of paper.

And while the Israel Police was busy performing its own version of the Keystone Cops, a group of marauders who nearly killed a family as it slept was laughing all the way to the next ‘price tag’ attack.

Related:
Don’t blame the settlers for violence against Palestinians