For the second time in a week, Israeli police have imposed restrictions on Breaking the Silence lectures scheduled to take place in private venues. The owners of those venues and Breaking the Silence claim police are silencing the organization’s message in a way that serves the right wing in Israel.

Breaking the Silence is an organization of former IDF soldiers that collects and distributes soldier testimonies about the occupation in order to show Israeli society exactly what it is sending its children to do. It has become the target of numerous right-wing attacks in recent years, including from members of the government.

Three high-ranking police officers, including a station commander, showed up on Sunday at Bar Kayma, a vegan restaurant-bar in south Tel Aviv’s Florentine neighborhood. The police brass asked the restaurant’s management various questions about the Breaking the Silence event planned for Monday. The officers noted that on the event’s Facebook page some 70 people had indicated they planned to attend the lecture, whereas the restaurant’s business license gives it a maximum capacity of 38 people.

“We have been in business for three-and-a-half years, during which we’ve had three to five events each week, most of which have had ‘attending’ numbers far larger than our maximum capacity, and most people don’t actually show up. We once had 1,000 people indicate they were attending. Nevertheless, this is the first time in all of those years that police have come here to talk about our business license,” explained Aharon Porat, one of the managers of Bar Kayma, and a member of the collective that owns the establishment. Police said that somebody reported the event to them. 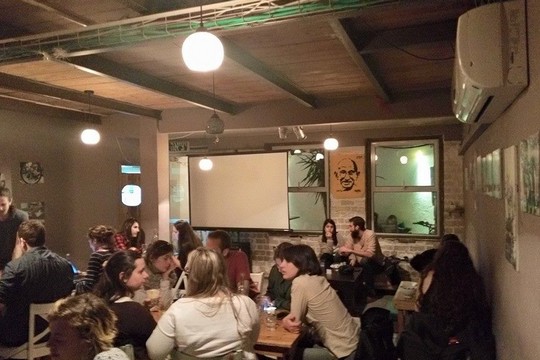 The restaurant-bar where the Breaking the Silence event was scheduled to take place. (Courtesy photo)

“The officers said they are only concerned about the safety of the participants, and when we said that it sounds like a political matter they denied it. Then they started talking about all sorts of minor matters relating to our business license, like the fact that name of the manager of the restaurant isn’t up to date and that it’s not okay that we’re using the courtyard as a smoking area. They also said that we are responsible for what happens outside our establishment, on the street, if we turn people away and there are problems.”

After some discussion and consultation with Breaking the Silence, the restaurant’s management and the police officers agreed that only people who register in advance will be allowed in, and that the number of attendees will be limited to the maximum capacity of the restaurant. Later that day, other police officers called to make sure that they were actually doing so.

“It reeks of political persecution,” Porat said. “You can’t ignore the fact that the same thing happened in Be’er Sheva. I also have to say that it’s threatening. As a business owner you want to be in the good graces of the authorities, because you know how easy it is for them to come after you administratively and bureaucratically. When this is what happens nobody is going to want to host Breaking the Silence events, even if they support the organization, because they’ll come after you.”

As we reported here, Israeli police requested and received an injunction against a similar Breaking the Silence event scheduled to be held at a bar in the southern city of Be’er Sheva last week. Police sought the injunction as right-wing Jewish activists made public threats against the event and against the owner of the bar. In their request to the court in that case, the police lawyers claimed they were asking for a last-minute injunction without a hearing because police only became aware of the event at the last minute — despite the fact that several days earlier police arrested someone for allegedly threatening the bar’s owner in connection to the event.

The management of Bar Kayma fears that police will attempt a similar maneuver ahead of the event scheduled to take place at their Tel Aviv establishment. Such a step, bar’s management says, would be meant to send a message about hosting events like this.

“Unfortunately that’s the situation we’re living in,” said Yehuda Shaul, one of the founders of Breaking the Silence. “Law enforcement authorities, following the lead of the Netanyahu-Bennett-Shake government, are capitulating to right-wing violence. This is happening in Hebron, when police and soldiers protect settlers attempting to take over Palestinian-owned homes, and it is happening in Be’er Sheva and Tel Aviv when police capitulate to the Right’s threats of violence, and attempt to shut down lectures and stop a discussion about what’s happening in the occupied territories.”

A spokesperson for the Tel Aviv district police sent the following response:

A [ranking] police officer visited the location after we were made aware that the number of people who confirmed their attendance was far higher than the limit set in the business license. In order to prevent a disturbance of the peace and public order at the establishment, the owners were instructed to ensure that they comply with the terms of their license.

(Full disclosure: Some four years ago, when Bar Kayma first opened, I bought a membership in the cooperative that operates it. Since then, I have not been involved with the restaurant in any way and I have no connection to its management. Nevertheless, I am still a member on paper.)