+972 Magazine strongly condemns the silencing of and political assault against Palestinian journalist Makbula Nassar by Israel’s most-read newspaper and a senior government minister. 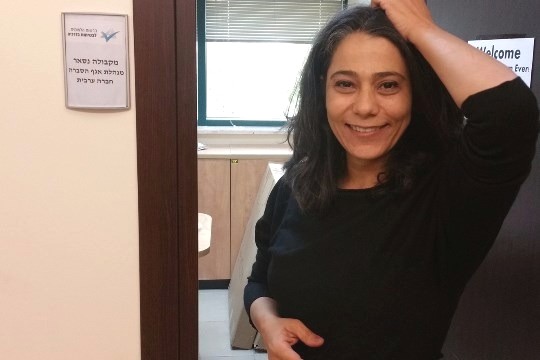 Israel Hayom, the free daily widely viewed as Prime Minister Netanyahu’s mouthpiece, reached new heights of McCarthyism when it targeted journalist Makbula Nassar, a blogger for Local Call and frequent +972 Magazine contributor, above the fold on its front page Wednesday. According to the newspaper, Nassar, who was recently appointed the National Road Safety Authority’s head of Arabic-language public relations, was accused of being an “active member of anti-Zionist and pro-Palestinian organizations.”

The “investigative report,” by journalist Daniel Soryoti, included looking through old posts on Nassar’s personal Facebook page, in which she expressed criticism of the state and the way it treats the Arab public in Israel. These posts were carefully handpicked and packaged under a sensationalized headline calling Nassar a “prominent activist against the state.” It didn’t take long for Transportation Minister Yisrael Katz to call for her to be fired.

The latest developments in highly publicized police interrogations of Netanyahu two closest confidants, part of several looming criminal corruption probes against the prime minister, however, only appeared on page five of the paper.

+972 Magazine condemns in the strongest possible terms the persecution of our friend and colleague, and we are proud that she is part of our community of writers. Nassar, one of the bravest and most renowned Palestinian journalists in Israel, was appointed to the job for her unrivaled professionalism. Despite the political silencing that has come to define this era, she has never once hidden her political opinions.

Anyone who views political criticism as “activities against the state” makes no distinction between the state and the government, as is typical of oppressive regimes. One of journalism’s central roles in a democratic society is to support political pluralism, especially when the opinions expressed challenge those of the majority and the government. It is saddening and shameful that Israel Hayom is once again serving as the government’s attack dog, striking at all those who stray from its political vision.

While Minister Katz’s response is anything but surprising, the fact that a minister in the Israeli government is demanding the firing of a civil servant for her political opinions crosses a dangerous line and should serve as a warning sign.

We stand proudly behind Makbula Nassar.

Written and published in the name of +972 Magazine’s and Local Call’s staff and writers.