Ghattas served a two-year sentence for smuggling cellphones to Palestinian political prisoners. ‘The conditions that Palestinian prisoners face are a central tool the occupation uses to reinforce itself.’ 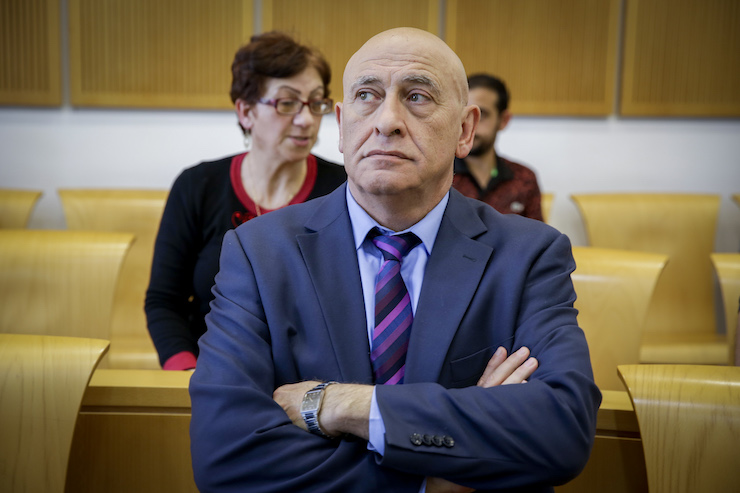 Former Balad MK Basel Ghattas was released from prison Monday morning after serving two years for smuggling cellphones to Palestinian political prisoners in Israel. Although his family was told that Ghattas would be released from Megiddo Prison at 10 a.m., an Israeli Prison Service vehicle dropped him off in Afula in the early morning hours, most likely to prevent a public reception.

Family and friends greeted Ghattas on his arrival to his home village of Rameh in the north. “The conditions that Palestinian prisoners face are part of Israel’s oppressive regime, a central tool the occupation uses to reinforce itself,” said Ghattas at the reception. “Their inability to communicate with family is the real prison,” he added. “There are prisoners from the West Bank whose family can’t visit them months at a time, even years. This is no less than a crime.”

In April, Palestinian prisoners in Israeli prisons launched a mass hunger strike to protest their deteriorating conditions. The strike ended days after it was announced, after the IPS agreed to install phones in prisoners’ cellblocks.

“The last round of negotiations has resulted in accomplishments, and the question is, why was it impossible to come to these conclusions earlier? Only out of a desire to harass prisoners. After all, they [IPS] know very well that there are hundreds of cellphones in prison,” said Ghattas.

Ghattas’ conviction came as part of a plea bargain that led to his resignation from the Knesset, after he confessed to part of the charges against him involving the smuggling of cellphones to political prisoners in Ketziot Prison. Palestinian prisoner Walid Daka, who was documented accepting the phones from Ghattas, was also charged in the case. Ghattas was sentenced to two years time served, 18 months on probation, a NIS 120,000 fine as well as a moral turpitude charge. He was brought to Gilboa Prison in July 2017.

During his imprisonment, the IPS decided to transfer Ghattas to at least four different prisons with no prior notice. He was originally slated to serve at a prison in the north, given that his family lives in the Galilee. Unlike ordinary prisoners, visitation rights for political prisoners are stricter: only immediate family members can visit for 45 minutes at a time once every two weeks.

After serving a third of his sentence, Ghattas approached IPS’s parole board with a request to have his sentence reduced. The board rejected his request, claiming that Ghattas hasn’t undergone a “rehabilitation process” in prison. Ghattas then appealed in court, but the IPS insisted that he is classified as a member of the proscribed Popular Front for the Liberation of Palestine – a classification he has denied – and therefore could not undergo rehabilitation. A Be’er Sheva court rejected his appeal.

Israel has a policy of not reducing sentences for political prisoners. MK Oded Forer of Yisrael Beytenu recently proposed a Knesset bill seeking to formalize this restriction, even naming it “The Basel Ghattas Law.”