More than two-thirds of Palestinians favor bringing Hamas’ armed resistance model to the West Bank, although majorities in Gaza prefer that the PA take over key aspects of security and governance of Gaza.

Prime Minister Benjamin Netanyahu and Israeli military leaders may have boasted of victory over Hamas last week following 50 days of warfare in Gaza, but a new poll shows Hamas with its highest-ever approval ratings among Palestinians since it took control of Gaza in 2006. In contrast, Netanyahu’s approval ratings have plummeted: 50 percent of Israelis said they are dissatisfied with his conduct, compared with an 82-percent approval rating at the beginning of the ground operation in mid-July, according to a Channel 2 poll.

If presidential elections were held today, Hamas leader and former PA prime minister Ismail Haniyeh would defeat Fatah leader and current PA President Mahmoud Abbas by a large margin (61 percent to 32 percent), according to the poll. In addition, for the first time in eight years, Haniyeh would also come in slightly ahead of imprisoned Fatah veteran Marwan Barghouti (49:45), who is serving two life sentences in Israeli prison. 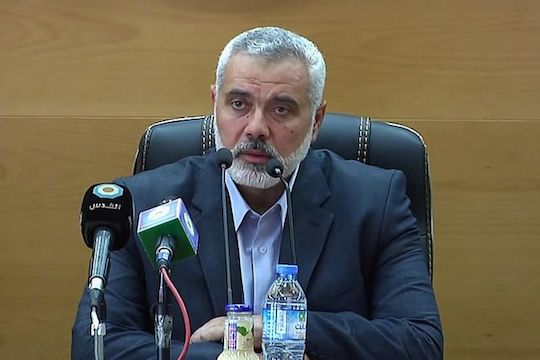 The poll, conducted by the Palestinian Center for Policy and Survey Research (PCPSR) among a sample of 1,270 adults in person in the West Bank and the Gaza Strip between August 26-30, 2014, indicates that 79 percent of Palestinians believe Hamas won the war, 94 percent are satisfied with its military performance against Israel and a majority — 53 percent — believes that armed confrontation is the most effective means for establishing a Palestinian state alongside the State of Israel.

Eighty-six percent of Palestinians support launching of rockets from Gaza if the siege and blockade are not ended, according to the poll. Half of those polled believe that launching rockets from populated areas is unjustified, but that number increases to 59 percent among Gazans; only 38 percent of those polled in the West Bank believe it is unjustified. 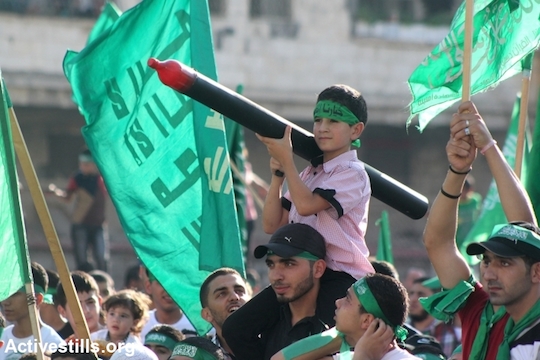 Overall, more than two thirds of those polled in both the West Bank and Gaza favor the transfer of Hamas’ armed resistance approach to the West Bank, although 61 percent believe that massive popular demonstrations could also contribute to ending the Israeli occupation.

Despite Hamas’ overall gains in popularity, in the Gaza Strip alone, the majority want to place the Rafah crossing and the security sector to come under the control of the Palestinian Authority reconciliation government; only a quarter of Gazans want them to remain under Hamas control. These statistics seem to point to overwhelming approval for Hamas as a military force in times of war with Israel, but not when it comes to governance and actual day-to-day rule.

It is important to keep in mind that polls taken during or directly after armed conflict tend to exhibit more extreme results with spikes in various directions, and the pollsters at PCPSR specifically warn that the latest statistics may revert in short time to what they were before the latest confrontation.

Related:
The victors of the Gaza war were also the losers
Five Gaza war takeaways
What if Hamas fired rockets at Britain?