As Egypt’s currency continues to fall and the IMF strings for a bailout package that will end fuel and food subsides, popular anger has turned on the country’s first democratically elected president. Now, out on the streets of Cairo, protesters are being confronted by the same forces they fought in order to overthrow Mubarak in 2011. 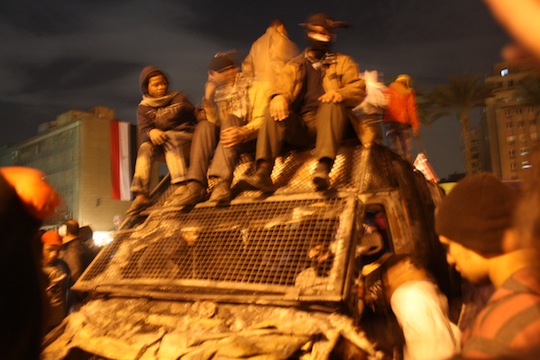 Black Bloc and Tahrir youth celebrate atop a torched, commandeered police truck in the center of the square. (photo: Jesse Rosenfeld)

CAIRO – Concrete walls have replaced the barbwire at the end of my street, sealing off the banks, the Parliament and western embassies from the rest of Cairo’s downtown. With nothing but lines of riot police and armored vehicles filling the concrete cordon, Egyptian security forces have created a fortress of wealth next door to the blocked off Tahrir square.

Clashes continue to rage on the edges of Tahrir as Cairo saw the first two deaths of the latest round of revolt. Around the country, the death toll has already surpassed 50.

Fierce street battles take place on the Corniche, nearby bridges and side streets, continuing to paralyze the downtown as the cycle of intense violence covers up a reality in which the protests have been geographically contained by security forces. Meanwhile, there seems no strategy for those in the street to expand their struggle.

As Egypt’s currency continues to fall and the International Monetary Fund (IMF) strings for a bailout package threaten to end prized fuel and food subsides, popular anger has turned on Egypt’s first democratically elected president who is being held responsible for his inability to meet the street’s demand for freedom and economic justice. Compounding the rapid disillusionment with the post-Mubarak political process is mistrust of the Muslim Brotherhood, following December’s constitutional process that focused on emboldening Islamic influence over the state, and enshrining military trials for civilians, all the while negating political freedoms and economic demands. Meanwhile in the streets, people are being aggressivly confronted by the same security forces they fought to take down Mubarak in 2011.

In the absence of the social resistance and the widespread labor strikes that were pivotal in the 18 days that brought down Mubarak, the intensity of the riots has spiked. Molotov cocktails and fireworks accompany rocks hurled at police and Corniche hotels while security forces use birdshot, and reportedly live bullets, alongside the clouds of teargas that never really clear from downtown. A state of emergency has been declared in Suez Canal cities where live fire has become a regular occurrence during street protests – seemingly from the crowd and the security forces – and there are reports of automatic weapons spraying mass street gatherings with bullets.

There is no love lost between the Egypt’s revolutionaries and security forces. As I wander through Tahrir towards the Corniche clashes on Monday evening, the night sky has a yellowish-red tint from the combination of smoke and teargas. Amid the crowded square where everyone is on edge (clashes have been pushed right to the edge of Tahrir), a group of ‘black bloc’ and young protesters ride into the center of the square atop a commandeered police riot truck. I’m pushed in every direction as cheering crowds stream past me to swarm the hated symbol of repression. Young people dance on the roof, singing and cheering as fireworks go off. Soon enough, the remnants of police riot gear is pulled from the armored truck as it is set ablaze next to Tahrir’s tents.

The streets around the square are unpredictable these days, empty one minute and filled with thousands of protesters and riot cops the next. Leaving the square for the impromptu frontlines gives an ominous feeling of walking into the abyss. Protesters set bonfires that dissipate the teargas and replace it with thick smoke and the smell of burning sage, illuminating the night and marking the fluid points of confrontation. I’ve doubled up on the hospital masks around my face in a bid to withstand the fumes as Molotovs are hurled and fireworks shot at the Intercontinental Hotel and police lines on the edge of the walled neighborhood of  Garden City – a symbol of wealth and power. The flashpoint symbolizes the rage at inequality and lack of social justice since Mubarak’s downfall.

Clashes like this are a daily and nightly occurrence and it is in this context I discover my phone and data credit – which has become like a lifeline – has mysteriously evaporated. Government and corporate bureaucracies in Egypt function about as efficiently as an under-supervised third grade class trip to the chocolate factory, and nowhere is this clearer than with the Vodaphone network.

After going to the cell phone store around the corner from my apartment to inquire, I am told the person from whom I bought the credit – which should have lasted a month – didn’t activate the right package and my credit had been used up. However, after much arguing in a mix of Arabic and English, I’m told there is nothing they could do other than file a complaint that would take several days. Otherwise I’d need to go to the store I bought it from.

So after roundabout taxi ride toward the leafy Cairo establishment island of Zamalek – dodging the continuous clashes on the Corniche as teargas floods in through the windows – I arrive at the tranquil bane of my cellphone anguish. Inside the store, another argument ensues with the manager over who is responsible, as he tries protect his colleague from culpability. As the discussion goes in unresolvable circles, I insist that I need the company to fix the problem immediate so I can get out of this bizarre Westernized oasis of wealth and back to the center of a dividing country. All of a sudden the manager, 27-year-old Mohammad Samy, stops arguing and looks at me intensely.

“Tahrir!” he says with a glint in his eye and a tone that suggests he now understands why my frustration is reaching boiling point. “I love the revolution,” he exclaims.

Bending his head down, he points to a bald indentation at the back of his skull. “You see this,” he asks. “It’s from the 25th [of January, 2013], when the Muslim Brotherhood were throwing rocks onto us from the October 6 bridge.”

The scruffy, slightly balding young guy then lifts up one leg of his jeans to show me the scars of bullet wounds. He tells me that those wounds are from the primarily leftist based, anti-SCAF demonstrations in November 2011 on Mohammad Mahmoud street just off Tahrir. During those demonstrations, his cousin – a 17-year-old boy nicknamed Gika – became one of the first martyrs of the post-Mubarak protests. A banner with his photo still hangs in the square and his name has become a protest chant demanding justice for those killed.

Samy was first politicized during the 2003 anti-Iraq War protests in Egypt and continued his activism throughout his university studies. He says he supports Mohammed ElBaradei’s Constitution Party and loves the nationalist-oriented Kefiya and leftist April 6 movements. For him, the struggle in Egypt is about freedom and equality, eliminating the culture of state and military impunity and building a country that doesn’t dwarf its people’s aspirations or the country’s centrality in the Arab world for the benefit of the United States.

The death of his cousin has only hardened his resolve to stay in the street until those changes come about. “Gika was just a boy, and still, there is no freedom, bread or social justice,” Samy says.

Samy doesn’t trust Morsi’s Freedom and Justice Party –  the post revolution political wing of the Muslim Brotherhood – and believes they are only interested in governing for its base supporters. Yet overshadowing his frustration is the economic crisis. “We need national projects to build our economy and make Egypt a great country again, not the IMF telling us what to do, like under Mubarak,” he contends, while putting his sense of nationalism front and center.

The likely elimination of food and fuel subsidies that come with an IMF bailout package will only turn the mounting political discontent into mass food riots that, Samy predicts, will be far more violent and engulf much more of the country.

Throughout our conversation, Samy puts calls into the corporate management, now advocating on my behalf while not selling out his colleague, in a bid to try and resolve my phone problems. Still, in the end, the company won’t budge. And while we part as friends, understanding a great deal more about each other, there is no resolution to the conflict that brought me here. Buying the correct phone package at a nearby store, I take another convoluted tax ride back to Tahrir’s fringes, where the clashes rage on.

Read more:
Block by block, Egyptians fight their past for a new future