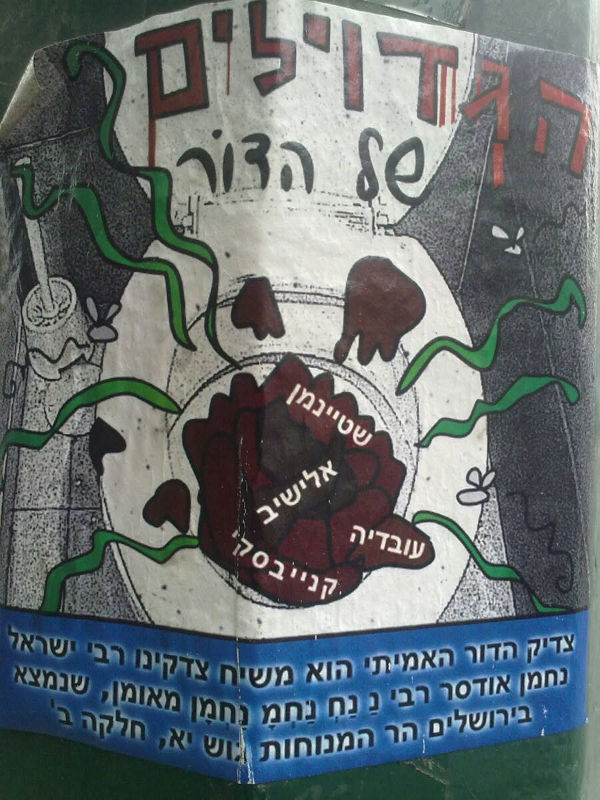 Walking along Tel Aviv’s Ben Yehuda Street today, I bumped into the poster shown above. At first I thought it was an advertisement for some anarchic party, but it turned out to be making a religious statement.

Inside the toilet bowl are the names of great rabbinical minds of our time. The name of Rabbi Yosef Shalom Elyashiv, head of the Lithuanian school in the Israeli ultra-Orthodox community, floats next to the names of two other leaders of the current: Rabbi Israel Knievski and Rabbi Aharon Leib Shteinman. Another piece of feces is labeled with the name of Rabbi Ovadia Yosef, leader of the Sephardic Shas movement and its political party.

Above the bowl appears the title “The generation’s greats,” with an intentional spelling mistake alluding to a slang term for bowl movements common inside the ultraorthodox community (“Greats” thus pronounced, would indicate #2, as opposed to “smalls” being #1). The text underneath the bowl further dismisses the Rabbis so crudely portrayed, and adds a surprising message. It read as follows: “The only true righteous man in this generation is our just messiah Rabbi Israel Nahman Oddeser Rabbi Na Nach Nachma Nachman of Uman, who is to be found in Jerusalem’s Har Hamenuchot Cemetery, section 11, plot 2.”

This poster was clearly designed and put up by those who consider themselves followers of Rabbi Nachman of Breslov, one of the great thinkers and spiritual men of the early Hasidic movement. There’s always been animosity between different Hasidic courts, not to mention between Hasidism in general and its opponents, including the rabbis named in the poster. But rarely has it been expressed so tastelessly, and seldom with the use of such indy aesthetic.

The graphic factor, however, is by far the least interesting thing about this poster. In recent decades, a group identifying itself with the Breslov court went to great lengths to proselytize among young,”hip” Israelis and recruit them. Every visitor to the country knows the “Breslovers” as the the traffic light dancers, who dance to loud techno music at major intersections. The same tactic that adopted such music as part as the movement’s language was bound to eventually adopt underground comics. All it took was for some talented and shameless artist to join the ranks.

What’s far more interesting is the use of the title “messiah.” The text is a tad unclear, but the messiah in question seems to be Rabbi Israel Ber Oddeser, or “Grandpa Israel” an aging hero of the movement.

According to Breslov tradition, Rabbi Odesser discovered in the early 1920’s a note in the handwriting of the movement’s fabled founder. That note, tucked in a book, outlined the mystical way in which Rabbi Nachman’s name must be written, one Hebrew letter at a time, so that it may be pronounced “Na Nah Nachma Nachman.” The Ukrainian city of Uman, whose name is added to that title, is the resting place of Rabbi Nachman and today a major pilgrimage site for Israelis who turn to a religious lifestyle.

Indeed, the movement made great use of the note, the name and the legend surrounding both to enhance its draw and to grow. It has become large enough to be a major alternative to another Hassidic court known for its effective recruiting strategies: Chabad Lubavitch. Chabad, however, still possessed one treasure that the Breslovers lacked: In 1994 it declared that the last and recently deceased rebbe of its dynasty, Rabbi Menachem Mendel Schneerson, was the Jewish messiah mentioned in biblical prophecy.

So far the Breslovers had no messiah. The old rebbe died long ago and his mystical disciple, though impressive, was not inspiring enough in spirit, knowledge or originality to be named messiah in his own right. The poster suggests a fresh approach, one that may have come into being a few years ago: why not merge the two? Could Rabbi Odesser not be the resurrected, transfigured reincarnation of the Breslov rebbe?

In recent years we have seen more and more posters of the late Rabbi Oddeser bearing the inscription: “I am Na Nach Nachma Nachman of Uman.” Now a new poster seems to say it outright: the messiah is both rebbes, and he is to be found right here among us. Here indeed is his address, go and visit, but make sure you flush the toilet before you do.