No matter how much I look, I never seem to find any news items about those whom Israeli society sacrifices on a daily basis, slowly, until they turn to dust.

By Yael Cohen-Rimer (translated by Yudit Ilani and Shaked Spier) 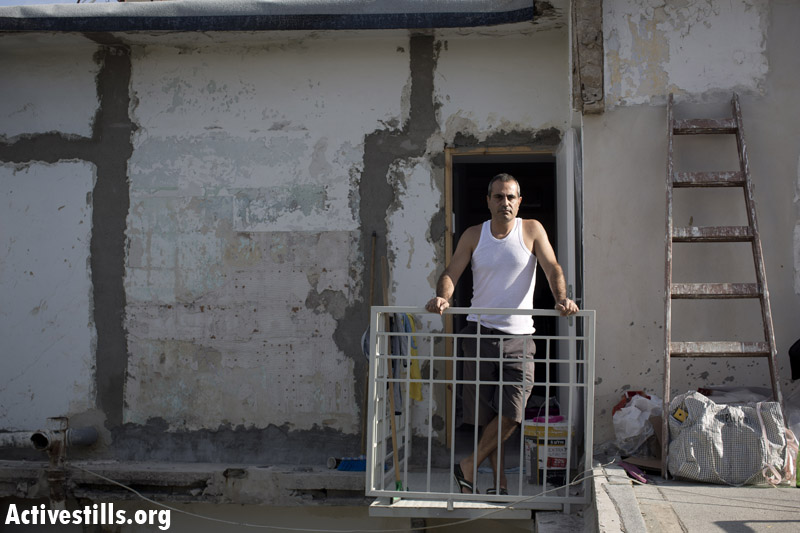 Meir, living in the apartment for twenty years. His apartment was damaged after nearby apartments were destroyed by the Gefen constructors to prevent from squatters and other families to move in. (Oren Ziv/Activestills.org)

She is somewhere outside, the 13-year-old girl who was sent by welfare services to step over the dried blood at the entrance to the building floor. This blood reminds her of her mother, who jumped out of the front window about a week ago. So far, no one from the welfare services has come to talk with the girl or with her sisters. Just another one out of many driven to suicide by poverty.

”Spit it out, talk your anger away,” says Vardit, while I’m sitting in my car near my home, crying into my cellphone. After she hangs up, I continue sitting there for a while, afraid to go upstairs. I know that if I go up and close the door behind me, a heavy veil will come down and push everything out. I know that my daughter Netta will call “Mommy!” in excitement; then she’ll ask “Mommy, why…” before explaining to me that “that’s the way it is.” And I know I’ll finish the evening on the couch with Ofir, wondering whether to watch another episode or go to bed already. I know I will stop replaying that memory, lodged somewhere deep in my stomach, of a 13-year-old girl sent yet again to step over the blood stains at the building’s entrance; reminding her of her mother who jumped from the front window about a week ago. No one even bothered to talk to her or her sisters, nor did anyone come to talk to their stepfather. The oldest sister, 16, went to the social services, begging for help. “After the holidays,” they promised her, referring her to us, thus passing on the problem to someone else.

When I get out of the car I will lose that rage, that fervent anger toward my country — its social services and its social workers whose sense of compassion has become so eroded that they are able to look these young girls in the eyes and tell them “to wait until after the holidays.” I’ll lose the anger toward a state that can leave a family of a stepfather and five girls — whose mother died in the wrong war — to fend for themselves in that suffocating swamp of despair, barely holding on by the tips of their fingers. Of all the involved parties, from the housing company to the municipal welfare department, no one was able to find some time to clean the blood stains from building’s entrance.

When I enter my home I will begin to forget another conversation I had with another mother whom I had helped in the past. She tried to contact me, but when I returned her call and asked her if everything is all right, she answered in a wavering voice, “This is not a convenient time to talk,” and that she will get in contact me. In the background I heard the sound both of people screaming at each and a baby crying. When I enter my home I’ll forget she hasn’t yet contacted me, that her husband has already threatened her in the past, if “she asks for money one more time, he’ll kill her and the baby.”

And although we did manage to provide her with social security, she is still living with him. After all, where can she go in the Negev, with its lack of infrastructure, social housing, employment options or hope?

That veil of impenetrable indifference is efficient. It allows us to function, to live, to select a new color for the door, select the best kindergarten and make a choice between a cheese or an egg sandwich.

It allows us — the well-fed though not wealthy in Israel — to lock out “the other Israel” out of our homes; to hide it behind committees, slogans and photographs of handshakes; to make the occasional donation via text message or join a campaign; to proclaim a war against poverty and show how unified we are before going home.

It allows the bureaucrats at the Ministry of Finance, who control the national budget, to sleep tight. Yes, the ones who copy and paste numbers on excel sheets; who talk about percentages and cuts and “hard decisions”; the ones who juggle numbers and budgets and, in the end, always transfer money to places that already have more than enough — far away from the places where women, men, and children are trying to hang on in that suffocating, dark quagmire, with no hope, only desperation.

“That girl,” says the center’s manager, who met with her today, “is brilliant, an excellent student.” And I think to myself, where will she end up? Where will a girl who grows up facing institutional violence end up? When the thin leftovers of a social safety net that she could have had disappear before her eyes? When they fail to save her, time after time, although she is so easy to save? A brilliant girl, an excellent student.

It is a veil of ignorance, but contrary to Rawls’ assumption, we will not step in front of it. We make decisions based on budgets and priorities. We fight unnecessary wars that hinder us from fighting the right ones, which can fix and heal. We talk about solidarity, but think only of the familiar and stay blind and indifferent to the stranger. We know that at the end of a workday, the veil won’t be lifted. Our decisions will continue to affect others but not ourselves. And we can leave the car, step into our safe space, and shut the door behind us.

The next morning I read in the newspaper about the IDF chief of staff, who was relieved of his duty after Israel almost sacrificed the army. No matter how much I look, I never seem to find any news items (no matter how short) on those whom Israeli society sacrifices on a daily basis, slowly, until they turn to dust.

Yael Cohen-Rimer is a lawyer in the legal department of Yedid – The Association for Community Empowerment. This article was first published in Hebrew on Haokets.