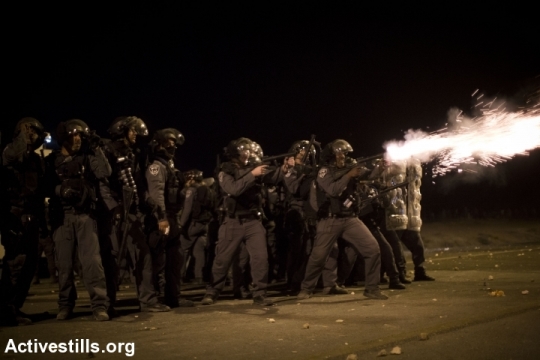 A military-like operation: Police shots tear gas at protesters during protest against the Prawer-Begin Plan, near the town of Hura, Israel, (November 30, 2013.)

Members of the foreign press in Israel received an invitation this week for a tour in the south to “explore the topic” of the Bedouin population. The visit is intended to present the plan for the arrangement of Bedouin settlement in the Negev, which, according to the invitation, aims to promote “the economic development for the Negev’s Bedouin population [and] to resolve the conflict over land ownership.”

The tour, which will take place on December 10, is hosted by General (res.) Doron Almog, who heads the unit which will implement the (re)arrangement plan, commonly referred to as the Prawer Plan (named after another general, Udi Prawer, who drafted the initial document).

This military-like operation is meant to relocate tens of thousands of Bedouin – the native population of the Negev – from their homes in the unrecognized villages and into designated areas whose exact borders and locations have yet to be revealed.

There is something telling in the fact that Almog is talking to the foreign press while details of the plan are being kept secret from the Bedouin themselves. Almost 100,000 Bedouin live in the Negev’s unrecognized villages, but while Prawer Plan is set to become state law in a matter of weeks, not one of them knows whether his/her house will be destroyed or village displaced. Even the contractors that are hired to implement the plan must sign a special clause that ensures they maintain absolute secrecy on Prawer’s details; violating this clause is defined in the contract as a “national security offense.”

In fact, the only person to receive details of the designated areas for the Bedouin was Housing Minister Uri Ariel – the most extreme settler in the government – who demanded to view the maps before supporting lending his support to plan. Apparently, Ariel was satisfied with what he saw.

The problem of the unrecognized villages was created due to Israel’s refusal to honor Bedouin claims to the land which were never registered by the British or Ottoman authorities (later, the state also erased all  land claims in cases where the owner was absent from his/her property, leading to the expropriation of land belonging to those Palestinians who fled or were expelled in 1947-49).

The Bedouin kept track of their land through their own traditional system. And while it never gained official status, it was recognized by the British authorities. Apparently, Jews who wanted to settle the Negev before the creation of the State of Israel knew that some areas of the desert were already populated and that the land was taken.

A document from 1920, prepared by the Zionist organization Hachsharat Hayishuv, shows that 2.6 million dunams (642,000 acres) of land around Be’er Sheva were already owned and that over 35 percent of this territory was being cultivated. The documents, discovered by Professor Oren Yiftachel of Ben-Gurion University and presented by Rabbis for Human Rights, are available in the Central Zionist Archives.

As late as 1952, after the Bedouin population in the western part of the Negev had already been deported to the east (where they currently reside), an Israeli government committee determined that, in practice, the British government recognized Bedouin land claims; based on this recognition, some Jewish organizations even paid for the lands which they sought to settle. However, the lands were not registered by the State of Israel, and as a result, Israeli courts continued rejecting Bedouin claims throughout the years. In the eyes of the state, the natives became invaders in their own homes and fields.

Since the problem was only partly dealt with – a good part of the population was pushed into seven Bedouin cities built by the Israeli government, while some land claims were noted in the 70s but not recognized – the more the Bedouin population grew, the worse things got. In the absence of zoning plans, the state kept destroying Bedouin homes and depriving Bedouin communities of basic infrastructure such as water and electricity. Today, the government makes a big deal out of the fact that some of the unrecognized Bedouin villages did not exist two decades ago – so-called proof of what is presented as a Bedouin attempt to take over the Negev, or what General Almog calls “a contiguous territory from Hebron to Gaza.” However, one must wonder what other options a population kept outside the law is left with.

The desire to finally settle the issue could have been a blessing, were it part of an honest attempt to honor the rights of a native population. But the government’s plan seems to be more about the classic “maximum land, minimum Arabs” formula than about the Bedouin population itself – especially since at least in some cases, Jewish settlements are planned to be built on the sites of evacuated Bedouin homes.

Since last week’s protests, Israeli officials and columnists have been complaining that the Arab leadership and left-wing activists are trying to turn Prawer into “a Palestinian issue” and internationalize what is essentially an internal Israeli dispute. The Bedouin are indeed Israeli citizens, but as history has taught us, the only way to defend the rights of an ethnic-native minority is through the mobilization of the international community (and even then, chances of success are slim). Even democracies tend to recognize the rights of natives only after dispossessing them of most of their assets and territories. Only then are books written about their tragic histories and museums built in their honor. The Bedouin are still here. They don’t need a museum, they need their rights.