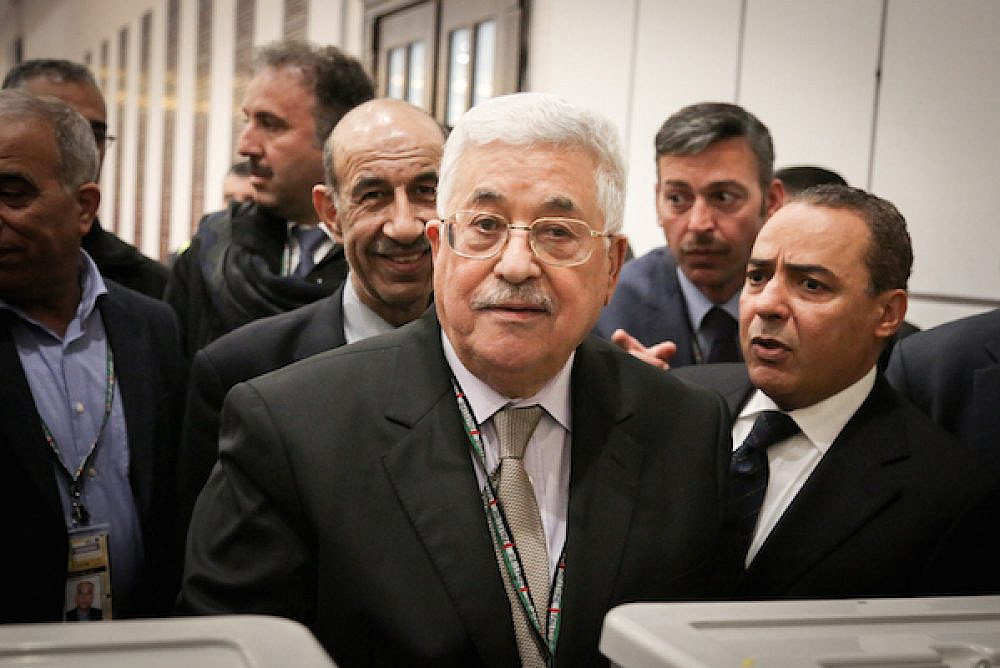 Palestinian president Mahmud Abbas casts his vote at the Muqataa, the Palestinian Authority headquarters, in the West Bank city of Ramallah on December 03, 2016. (Flash90)

Someone in the Israeli intelligence community is worried about the health of Palestinian President Mahmoud Abbas, and specifically about what may transpire on the day after his death. Anonymous sources want the Israeli public and its decision makers to be concerned as well. Indeed, from the point of view of the Israeli establishment, there is cause for concern. The possible death of Abbas threatens the status quo and those who reap the benefits from it.

Since his election in 2005, Abbas has been a convenient partner for Israel. He has allowed it to control the entire West Bank while expanding settlements, and has never really posed a serious political threat. This is one of the few things both the Israeli and Palestinian public — which disagree on nearly every other issue — agree on. In response, Israel has allowed Abbas and his supporters to imagine the feeble Palestinian Authority as a kind of “state in the making,” while enjoying a handful of victories. The Palestinian public, however, views the PA in a different light. For average Palestinians, it is a mechanism to create employment and generate income in the present — not a promise for the future.

It is precisely at this point that the interest of the Palestinian public meets Abbas’ policies. Abbas creates quiet. This is what convinces European states to donate large sums on a yearly basis to prop up the PA, despite its rampant corruption and without ever knowing when the Palestinians will be able to end their dependence on Europe’s generosity. This works as long as clashes between Palestinians and Israeli security forces are kept to a minimum, as long as protests don’t sweep the capitals of Western Europe, and the masses don’t flood the streets calling to stop Israel (and let’s not forget that those same Western European states enjoy security coordination with Israeli intelligence, and has no reason to put an end to it). The truth is that Israel is the one chipping away at the status quo. But as long as it does not chip too hard, these problems can be delayed. 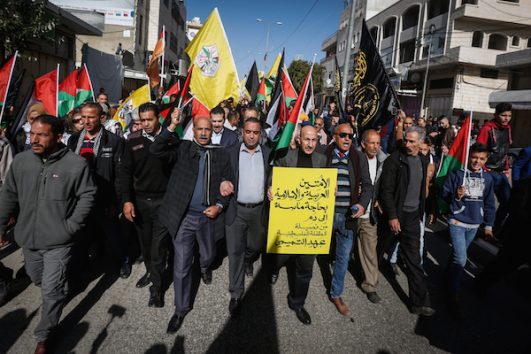 Palestinian demonstrators in the occupied West Bank city of Hebron, as protests continue over US President Donald Trump’s declaration of Jerusalem as Israel’s capital, on January 12, 2018. (Wisam Hashlamoun/Flash90)

Ramallah is awash with rumors over Abbas’ deteriorating health, which Israeli intelligence then circuitously confirmed. The rumor mill creates an alternative media reality in which Palestinians consider their official spokespeople as purveyors of fake news about Abbas’ health. Abbas, say his spokespeople, is healthy overall.

Rumors are a symptom of politics. Rumors and alternative medias flourish in centralized regimes, especially when they face embarrassment and a vacuum is created. For years, Abbas has rejected the requests of Fatah members and Arab politicians to appoint a deputy. He likely wanted to prevent a struggle between those who, on the one hand, deem themselves worthy enough to replace him, and those who could opt for subversion should they not be selected. Those who he deemed to be threats to his rule, such as Muhammed Dahlan and Salam Fayyad, were dealt with harshly.

It was unusual, then, that Abbas selected Mahmoud Al-Aloul as his deputy in the Fatah party, giving him a boost in the race to succeed the Palestinian leader. But Abbas’ authority is only formal, and he does not have the legitimacy to crown Al-Aloul his successor. Polls show that over the past two years, the Palestinian public believes Abbas has failed and must leave his post.

In Abbas’ eyes, al-Aloul, 68, is an ideal deputy, just as Anwar Sadat was chosen by Gamel Abdel Nasser: a member of the old guard who is not too charismatic, and swears loyalty to his superiors. In the eyes of his peers, as well as Israeli intelligence, Sadat was viewed as someone who lacked all leadership qualities — someone who would fill the revered Nasser’s shoes for a matter of months until the powerful forces competing with the army and the government decide who will be president. Sadat got rid of those forces rather quickly and paved an independent path for himself. Even if al-Aloul is cut from similar cloth as Sadat, he is not the vice president of the Palestinian Authority — he is number two in Fatah. 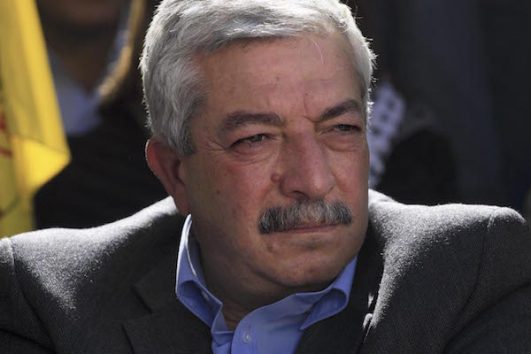 Bumps on the road to the top

Al-Aloul was arrested by Israeli forces when he was 17, just after the occupation began, and spent three years in prison before being deported to Jordan. He joined Fatah and became a combatant under the command of Abu Jihad. Over the years, he replaced his support for armed struggle as a means of achieving independence with support for peace talks and the Oslo Accords. Israel allowed him to return to the West Bank in 1995, and a year later Yasser Arafat appointed him mayor of Nablus. He entered public consciousness after the IDF killed his son, Jihad, during the Second Intifada. In the 2006 Palestinian elections, al-Aloul was elected to join the Palestinian Legislative Council and the government, and was appointed welfare minister by Abbas (a position previously held by Abu Jihad’s widow). In 2009 he became a member of the Fatah Central Committee. Al-Aloul lacks real political experience, and like Abbas he is suspicious of Hamas’ willingness to compromise with Fatah.

Trump’s recognition of Jerusalem as Israel’s capital led to changes in Abbas’ policies. Abbas is at the head of the confrontation with the Trump administration, while in the occupied territories, Palestinians are clashing with settlers and soldiers. According the UN, 20 Palestinians and one Israeli were killed in the first month following Trump’s declaration. Another 500 Palestinians and 17 Israelis were wounded. According to Palestinian reports, over 1,000 people were arrested in Jerusalem during that same period. The ground is shaking, and as the control over a civilian population grows more difficult, Israel uses more violent policing methods.

As opposed to Dahlan and Jibril Rajoub, who are claiming the Palestinian crown, and who were appointed and groomed by Arafat (as opposed to Marwan Barghouti, who challenged Arafat without ever undermining him), al-Aloul is, first and foremost, Abbas’ man. Abbas also promoted Majd Faraj, the head of Palestinian intelligence, who has won the trust of both Israel and the United States. Should Abbas step down, al-Aloul will have to transform himself from Fatah’s number two to president of the PA in three separate arenas. First, he will need to show that his path toward Palestinian independence is different from Abbas’; he will have to ingratiate himself, not without difficulty, among his younger and better known competitors; and he will need to gain the public’s legitimacy. This can take place either through the formal route of general elections, or through organized and committed resistance to the Israeli occupation.

A version of this article appeared in Hebrew at Local Call. Read it here.