With his unprecedented and heartfelt speech in Kafr Qassem commemorating the massacre there, President Rivlin has outlined a future of equality, respect and shared identity for Israelis and Palestinians alike.

Israeli President Reuven (Ruby) Rivlin visited the Palestinian town Kafr Qassem in the Triangle region of Israel on Monday to commemorate the massacre of 49 of its residents by Border Police in 1956. He was the first president to attend the formal memorial ceremony, and only the second president to visit, according to Haaretz.

After nearly 15 years of a severe deterioration in relations between Palestinians and Israeli Jews, the visit stood out as a good-will gesture rarely seen on the part of any Israeli leaders. During the vicious climate of the war over the summer, the Israeli public became more accustomed to its elected officials calling Arab citizens terrorists, traitors, and trojan horses and calling to boycott Arab businesses (shouldn’t this be made illegal?).

But even before the war, the previous Knesset passed laws targeting Arabs and debated mean-spirited bills; and the bigot Avigdor Liberman’s star has only risen. These developments topped a dark decade that began with the killing of 13 Arab citizens in October 2000 during demonstrations – a traumatic turning point in relations back then. 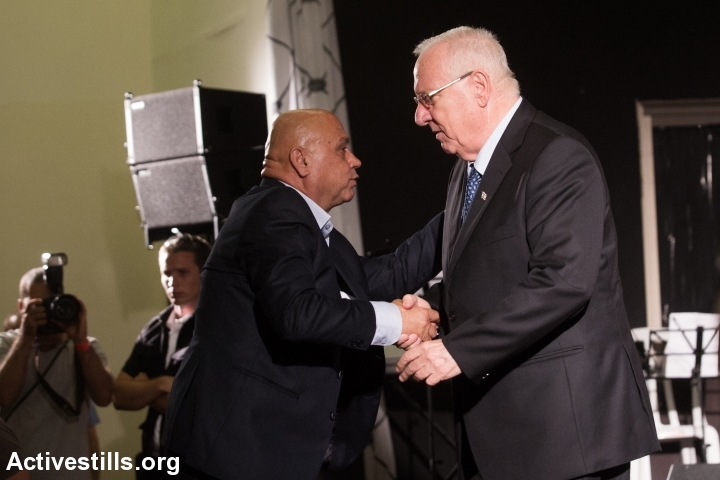 The Kafr Qassem massacre in 1956 took place amidst escalation on the eastern border with Jordan and the start of the Sinai campaign. A curfew on Arab towns in the Triangle area – much of the Arab population lived under military rule from 1949-1966 – was changed from 9 p.m. to 5 p.m. Anyone violating the order was to be shot. Many of the residents were farmers were out working their fields when the change to the curfew was announced. Military personnel in the other towns realized that residents would be unaware of the new curfew time and concluded that the order was not logical. But in Kafr Qassem, Border Police soldiers opened fire, murdering 49 unarmed civilians returning from the fields.

This terrible chapter may have precipitated some progress. The state takes pride in the fact that Supreme Court Justice Benjamin Halevi tried the killers and set a legal precedent in Israel by decreeing that it is a soldier’s duty to refuse a “manifestly illegal order, on which the black flag of illegality flies.” Soldiers who carry them out can be tried; soldiers who refuse can draw on this as a legal defense. Further, some say the Kfar Qassem massacre hastened the end the military rule that Israel’s Arab minority lived under for the state’s first 18 years.

But such progress is heavily circumscribed, even schizophrenic. The duty to refuse is indeed a value in Israeli life, but in practice it is extremely complicated for a soldier to navigate in real time. Regarding the massacre itself, lengthy prison sentences for the key guilty parties were whittled down through bureaucratic and political decisions including, inexplicably, a presidential pardon. And it was another 10 long years before the military rule over Arab citizens ended.

Fifty-eight years later, the president’s visit was a symbolic sign of brotherhood. He said things I have longed to hear, particularly after years of vitriol from Israeli-Jewish political leaders.

The State of Israel has recognized the crime committed here. And rightly, and justly, has apologized for it. I too, am here today to say a terrible crime was done here… We must understand what occurred here. We must educate future generations about this difficult chapter, and the lessons which we learn from it.

This paragraph is for all intents and purposes an apology. The president’s emphasis on teaching future generations is a change from earlier attempts to hide the state’s crimes. Rivlin’s vision is a step away from the lie of false purity, and calls on Israel to confront its deeds head on. He went on:

I came here today, specifically during these difficult days to reach out my hand, in the belief that your hands are outstretched to me and to the Israeli Jewish public in turn. Friends. I hereby swear, in my name and that of all our descendants, that we will never act against the principle of equal rights, and we will never try and force someone from our land.

This statement pushes the bar from the “is” to the “ought;” it is, for once, a desirable vision for a way forward compared to the ills of the present.

Rivlin then said something rarely heard in Israel from the left or the right: he stated that this is also the homeland of Arab-Palestinians. In so doing, he addressed them not as a fifth column, newcomers or subjects, but as indigenous citizens and equals; as partners, not problems. In a nearly buried sentence, he made their identity part of the nation.

The State of Israel is the national home of the Jewish people, who returned to their land after two millennia of exile. This was its very purpose.

And in a slapdown to the far-right, he legitimized the fact that they will not surrender their identity to embrace that of the people who conquered them:

…The Jewish public must understand that the ambition of so many to live alongside a Zionist Arab minority, which proudly sings the Hatikvah (Israel’s national anthem), will not, and cannot be realized.

The president even acknowledged some of the most sensitive tensions among Arabs in Israel: their commiseration with Palestinians under Israeli military occupation, racism and the daily scourge of discrimination of resources and opportunities in their own country.

I am aware that the establishment of the State of Israel was not the realization of a dream for the Arabs of this land. Many Israeli Arabs, forming part of the Palestinian people, feel the hurt and suffering of their brothers on the other side of the Green Line. Many of them experience not uncommon manifestations of racism and arrogance on the part of Jews.

…We must state plainly — the Israeli Arab population has suffered for years from discrimination in budget allocation, education, infrastructure, and industrial and trade areas. This is another obstacle on the road to building trust between us. A barrier which we must overcome.

These statements are close to perfect-pitch in terms of bold moral leadership, with a vision of an Israel that I can support.

But like the Kfar Qassem episode itself, the new president’s speech represented contradictions in his intentions, that marred the notion of real progress. Some of his words are sentiments that could actually perpetuate the very dynamics he hopes to shift.

Oddly, he called on the Arab citizens of Israel to renounce violence and terrorism and accused them of not doing so, although there hardly is any (nationalist) violence or terrorism in this community.

The Arab population in Israel, and the Arab leaders in Israel, must take a clear stand against violence and terrorism. All that live here, must today stand up and speak out against violence, against those who try to plunge us into the abyss. And I must tell you, this voice is not being heard. Neither clearly nor strongly enough.

It is understandable that the president was emotionally overwhelmed, having just attended the funeral of the three-month-old infant killed in a terror attack in Jerusalem last week. Practically during his visit, a second person died of injuries from that attack. As if a three-month-old is not horrible enough, this woman, a tourist, was just 22 years old. 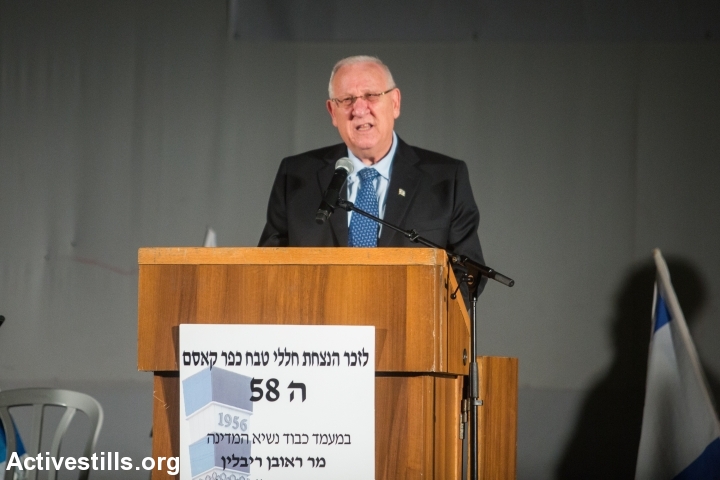 But the implication that citizens of Israel are somehow linked to terror attacks by Palestinians under occupation (East Jerusalem Palestinians cannot be viewed in any other light, especially in recent months) is frankly absurd. It reinforces the idea that all Palestinians are the same – and all are terrorists.

The statement also makes me wince, coming after a summer when over 1,000 civilians, and not one, but hundreds of children were killed by Israel’s army. The war was an extension of a daily, systematic 47-year violent military occupation. By his logic, the president should implore Jewish Israelis to condemn the killing of innocents in Gaza.

Still, in a net assessment, I believe the president’s intentions are genuine, and it is high time that Israelis see some leadership from at least one corner of the country. He has laid out a path – not a perfect one – but at least broad outlines for a future of equality, respect and shared identity. The Israeli people and government must pave the road with policy.

Related:
Why the Left’s best president might come from the Right
For Palestinian citizens, 1956 massacre is not a distant memory
‘Bad apple’ narrative still rotten 57 years after Kafr Qasim Massacre