Cyprus and Israel have grown closer in recent months over the massive natural gas discovery that transcends their respective maritime exclusive economic zones. But when it comes to the military occupations in which the two countries have long been embroiled, political friendship has its limits. 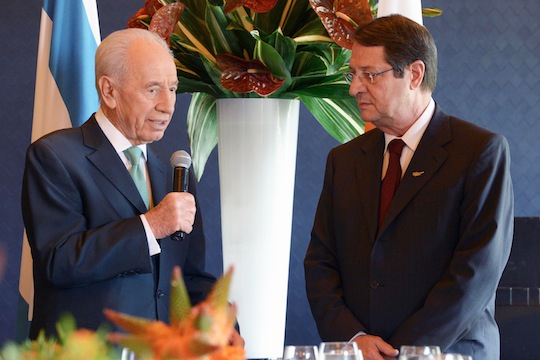 Recently-elected president of the Republic of Cyprus (RoC) Nicos Anastasiades, elected in January 2013, spoke at Tel Aviv University’s Faculty of Law Tuesday evening following an official visit that included meetings with both Prime Minister Benjamin Netanyahu and President Shimon Peres. His talk was a full-throated call to nurture the budding friendship it has sparked with Israel despite the recent thaw in Israel’s relationship with RoC’s long-standing nemesis, Turkey.

With Israel and Turkey hopefully on the road to repairing relations, there are sure to be ramifications for international cooperation on the enormous cache of hydrocarbons discovered over the last few years beneath the seas of Cyprus and Israel. Cyprus might be edgy about where Israel’s loyalties lie. Perhaps this is part of the timing of the visit.

Cyprus became the new friend when Israel’s long-term partnership with Turkey was in the doldrums. The Republic of Cyprus was the perfect candidate for a rebound relationship: the country is the heart of a long-running conflict between Greece and Turkey, and between their respective ethnic kin on the island who are pitted against each other: Greek Cypriots in the “south” – the UN and EU member state known as Republic of Cyprus, and Turkish Cypriots in the north, who under the protective patronage of a Turkish military occupation (and in some ways, an economic one) since 1974, declared themselves the Turkish Republic of Northern Cyprus in 1983 – recognized only by Turkey.

Israel and the RoC suddenly found they had at least one very important mutual strategic interest: the exploration, extraction and distribution of natural gas reserves, discovered neatly during the phase Israel-Turkey relations hit a nadir. The new friendship was thus another way for Israel to salt the wound with Turkey, which was already angry over the notion that the spoils of gas would all flow to the Greek government in the south and surely even more disturbed by Israel’s plans to enable that.

After a brief introduction about Cyprus, in which the bailout crisis that has rocked his country these last two months made barely a cameo appearance, Anastasiades seems to have taken a cue from President Obama in declaring everlasting love and friendship with Israel. He noted proudly that ties between Jews and Cyprus are ancient, and that in the biblical times Cypriot wine was used for the Temple (Cypriots of all stripes diligently maintain the role of wine in their culture to this day). He then jumped to more recent history: “No quick reference to the historic relations of the peoples of our two nations could obviously be completed” said the president with a flourish, “without mentioning the role that Cyprus played in the establishment of the State of Israel.” Like Obama, he suffered through a Hebrew word (“Haganah”) while reminding the audience that Cyprus assisted in the smuggling of Jewish refugees to Palestine after World War II (this part did not appear in the prepared remarks, available here). Some sharp adviser must have conveyed the soft-spots of Israeli identity, because he explained that both Cyprus and Israel share a history of “struggle for survival,” and identified the main regional threats today as Iran and Syria.

The president was clearly most interested in conveying the intention to upgrade relations between Cyprus and Israel and “embark on a new era of partnership.” That mainly meant cooperation on the hydrocarbon issue, and contributing to stability in the eastern Mediterranean. He clarified that Israel-Turkey and Israel-Cyprus relations are not mutually exclusive – but that only highlighted the fact that trilateral cooperation seems a long way off.

“Stability” leads to questions about the elephant in both rooms: the two unresolved political conflicts in which both Cyprus and Israel are engaged but which also drag major regional and international players into their vortex. Anastasiades apparently did not wish to distract from Israel-wooing by discussing Israel’s elephant, but he did touch momentarily upon the Cyprus conflict. His did so by repeating the standard Greek-Cypriot line now 40 years old: that 37 percent of Cyprus and 57 percent of its coastline is under foreign military occupation and resolution is in everyone’s interest. But he offered no insight as to how such resolution might come about.

It was an ironic moment that was met mainly with blank stares. Does Anastasiades really expect Israel, whose military occupation is so deeply ingrained in policy and life that it is almost transparent, to take up the gauntlet on behalf of its new friend Cyprus? Admitting that military occupation hurts Greek Cypriots (who hardly live in the north anymore) would open to the door to admitting that it hurts Palestinians in the territories, who are all living under some form under Israeli military occupation. Anastasiades would do well to remember that political friendship has its limits.