Yesterday, Pastor Chuck Kopp of the Baptist Church in West Jerusalem woke up to find his church vandalized. The Jerusalem Post reported that police spokesman Micky Rosenfeld suspects that Jewish extremists are responsible for the act. According to the Post, Rosenfeld said, “Officers are investigating a strong possibility of a (Jewish) nationalist motive, but no one has been apprehended yet.”

Cars that were parked outside the church were also vandalized, and their tires slashed.  Graffiti left on the church walls included the famous term “price tag,” which has been used by settler extremists in attacks on mosques in the last few years. Other graffiti in Hebrew reads, “Death to Christianity,” “Jesus son of Mary, the whore.” 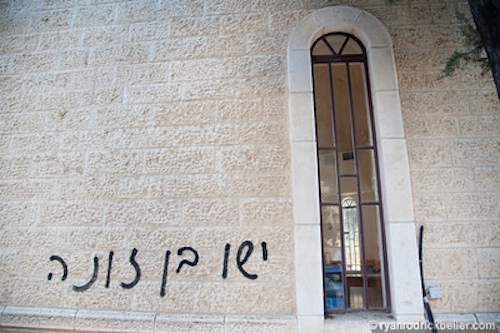 The church actually shares a parking lot with a synagogue, and ironically, one of the cars that had its tires slashed and was spray painted with graffiti belongs to a congregant of the synagogue.

The Baptist Church includes a number of Messianic believers, and the leadership has historically had connections to top Israeli political officials. 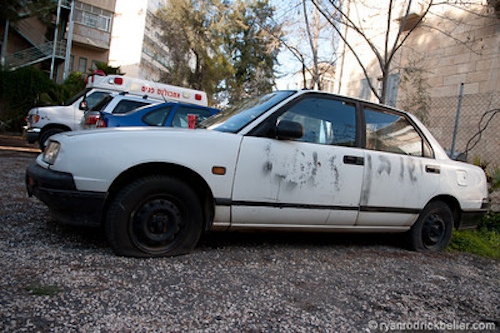 The “price tag” radicals are well known to police as products of the most extremist settlements. The irony in this case is that right-wing Christian support for settlers is a major source of income for even the most radical settlements, constituting a thorn in the side of both the American government and the Israeli military for years now:

A New York Times examination of public records in the United States and Israel identified at least 40 American groups that have collected more than $200 million in tax-deductible gifts for Jewish settlement in the West Bank and East Jerusalem over the last decade. The money goes mostly to schools, synagogues, recreation centers and the like – legitimate expenditures under the tax law. But it has also paid for more legally questionable commodities: housing as well as guard dogs, bulletproof vests, rifle scopes and vehicles to secure outposts deep in occupied areas. “I am not happy about it,” a senior military commander in the West Bank responded when asked about contributions to a radical religious academy whose director has urged soldiers to defy orders to evict settlers. Kimberly Troup, director of the Christian Friends of Israeli Communities’ American office, said that while her charity’s work is humanitarian, “the more that we build, the more that we support and encourage their right to live in the land, the harder it’s going to be for disengagement, for withdrawal.”

So now we have Christian funds from the United States that have effectively supported the misguided second and third generation settler youth who are actively attacking churches and referring to Jesus as a son of a whore. If this is what Pastor John Hagee and other radical Christians intended, then it suggests a rather bizarre theology of interfaith love and care. It seems in reality that these funds are intended to foment conflict, to promote a confrontational, apocalyptic and messianic end to the State of Israel.

Is this a pro-Israel Christian position? Are these the allies that Jews and Israelis really want? Would it not be better to stand in solidarity with a church that was attacked, which exists side by side with a synagogue in Jerusalem in respect and mutual toleration? Even better, would it not be wise to embrace and support interfaith peace and tolerance?

This is the choice that is facing Christians who love Israel, and Jews who welcome Christian support for Israel. It is the commonsense approach to the interests and values of both religious communities, Jewish and Christian, that they support only those forces on the ground that are fostering coexistence and nonviolent forms of engagement and even disagreement.

The strange culture of “price tag” Judaism is a sad stepchild of the occupation. It will ultimately hurt Jews, Christians, and Muslims alike, and it will compromise the viability of any state that Jews want to live in and feel safe in. This strange new reality of Christian funds going to support attacks on Christian churches is something that should cause some real soul searching, both among Jews and Christians.

Pastor Chuck Kopp mentioned that following the attack on his church, the synagogue next door gave flowers to the congregation.  That is worth remembering. Also, the Council of Religious Institutions of the Holy Land issued the following condemnation:

The Council of Religious Institutions of the Holy Land condemns the acts of desecration of the Baptist Church in West Jerusalem this morning. The Council calls upon people from all faiths – Christians, Jews and Muslims – to respect all Holy Places and sites for all three religions, and strongly discourages extremists’ behaviour that exploits or involves religion in a political/territorial dispute. In the name of the Chief Rabbinate of Israel, The Ministry of Waqf and Religious Affairs at the PA, and The Heads of the Local Churches of the Holy Land.

It is also worth recalling the parallel verses in the New Testament from Peter, and from the Hebrew Bible’s Book of Psalms.

“For whoever would love life and see good days must keep their tongue from evil, and their lips from deceitful speech. They must turn from evil and do good; they must seek peace and pursue it.” “Who is the person who desires life, who loves the days of life to see only good? Guard your mouth from evil, and your lips from deceit. Veer away from evil and do only good, seek and pursue only peace.”

The New Testament and the Hebrew Bible got it right here. When will today’s Christians and Jews get it right?

For more pictures of the church vandalization click here