UPDATE: Just one day after a bomb threat targeted Peace Now offices in Jerusalem, the building of Hagit Ofran, the organization’s “Settlement Watch” director, was vandalized in another “Price Tag” attack. Perpetrators late Monday night spray-painted her stairwell with the words “Hagit Ofran, ZL” (an acronym used for the deceased, literally translating to “of blessed memory”); “Rabin is waiting for you,” referring to slain prime minister Yitzhak Rabin, whose assassination at the hands of a settler was commemorated this week; and references to illegal settler outposts slated for demolition. A car parked outside the building but not belonging to Ofran was also tagged, with the words “Price Tag” and “Death to traitors” – presumably because it bore a peace sticker. 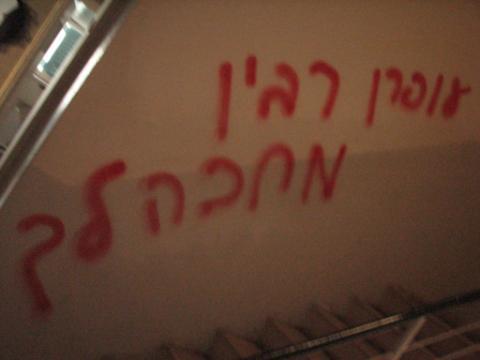 The Jerusalem offices of Peace Now were threatened Sunday evening by an anonymous person claiming to be from the “Price Tag” movement, which attacks Palestinian and leftist targets in retaliation for what it perceives as acts against the settler movement. Yariv Oppenheimer, the director of Peace Now, speaking by phone, related that around 8 P.M., a neighbor from an apartment on the floor above Peace Now’s offices was contacted through the intercom (the person contacted was not Hagit Ofran, as  Haaretz reported (Hebrew), head of the settlement construction monitoring committee). A male voice threatened that the building would be blown up in five minutes. The police were alerted, and the shocked residents were told to evacuate the building. When they left, the residents found the hallmark graffiti “Price Tag,” sprayed on the wall.

Oppenheimer relates that some of the residents saw from afar the person they suspected of making the call leaving the area. They described him as a young religious man.

The incident followed a related one from Friday, when a Star of David was sprayed in black on the wall of the building.  Following the two incidents, Oppenheimer told Haaretz:

We are worried that in the next phase, the residents of the building living near our apartment could be harmed. We filed a complaint with the police on Friday following the graffiti, which was not addressed. I hope the police see the writing on the wall…We alerted [authorities], including the Chief of Police, that Peace Now is under threat.

Ofran’s personal residence was also vandalized, about two months ago. Among the slogans was one reading “death to traitors.”

Oppenheimer placed blame directly with political figures, telling Haaretz:  “‘the behavior of the political echelons lends support to these kinds of actions. Even if they condemn it to the outside, in fact the thuggish behavior of the right has the backing of the Knesset.’” By phone, he elaborated:

I think they feel that no one can stop them, they have political backing and personal impunity, so it’s turning into a trend, unfortunately, among the right. The more active they become, the more the government is afraid to do anything and so the [Price Tag activists] are able to achieve their goal. The settler right has political power that can harm the coalition, so the political figures are worried, and it’s much easier for them just to brush over it.

The group has in the past conducted a campaign of vandalizing, arson and general destruction of property, usually on Palestinian targets in the territories as revenge for dismantling of settlements or illegal outposts. Over the last few months, the attacks have become more aggressive – including a mosque that was torched in Tuba Zanghariyya. Of late two new precedents have been set: the group has attacked IDF property in the West Bank, and then on Yom Kippur, graves in an Arab cemetery in Jaffa were desecrated. Just last week, a restaurant in Jaffa was torched with the same markings of the violent group sprayed on the walls.

Oppenheimer posted about the incident on his Facebook site, writing: “They will not deter us.”

Noa Yachot contributed to this report