In Israel’s most vibrant demonstration ever to take place on the refugee issue, and in two bold escapes from an ‘open prison,’ African asylum seekers are starting to present themselves as a political force to be reckoned with. 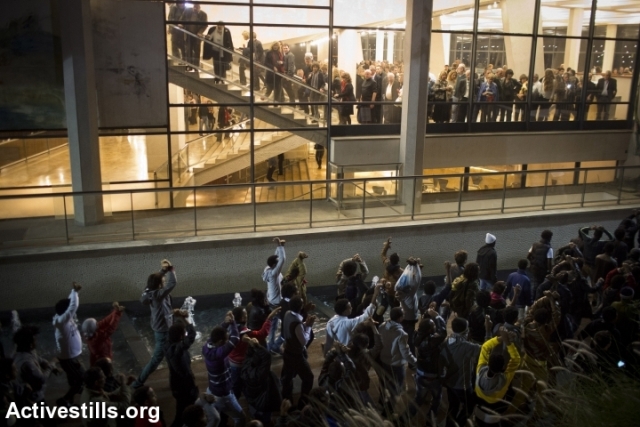 Saturday night was something like no one in Israel had ever seen before. It was supposed to be a small demonstration – a quiet march of several hundred Israeli activists and African asylum seekers, coming on the heels of two Marches for Freedom that took place earlier in the week (both of which were intercepted and suppressed by immigration authorities). Initially, it didn’t seem like it would be the kind of protest that would get much (if any) media attention. But from the second it began, it was clear to all those present that this time was different. More than 2,000 asylum seekers, all in danger of immediate and permanent imprisonment following the passing of the new Anti-Infiltration Act, after the previous was scrapped by the High Court (the court will soon hear the appeal against the new law), marched in the streets of south and central Tel Aviv. The asylum seekers, who had likely seen pictures or heard stories of their friends’ desert marches, were in high gear and bursting with energy. They started running through the streets, chanting only two slogans time and time again: “No more prison!” and “we want freedom!”

It went on like this for two-and-a-half hours. The several dozen Israeli activists present were stunned. Previous Tel Aviv demonstrations by asylum seekers were relatively calm, and included people holding up signs and giving long speeches – but with none of the energy felt that night. The police, too, was caught unprepared. Neither its attempts to negotiate with demonstrators, its placing of border and riot policemen in the protest’s path, its use of pepper spray, nor the arrests of several protesters were able to stop the protest. Every time the front rows of the running-dancing protest crowd were, stopped another segment of the demonstration would either turn into a different street, or double back and find a new path forward. The protest grew into about 6,000 people, at some point breaking up into two groups running in different directions. The larger part returned to Levinsky Park after an hour, while a smaller group of about 2,000 people continued running through central Tel Aviv. 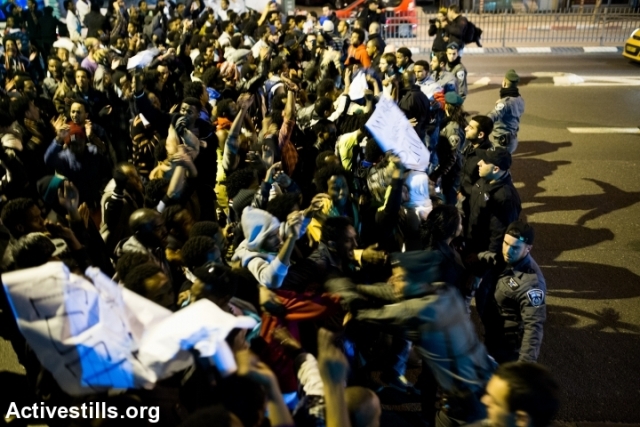 Looking at the two Marches for Freedom and the Saturday night protest, one can see a new pattern of political activism emerging among Sudanese and Eritrean asylum seekers – one of civil disobedience. Be it by escaping detention centers, going on hunger strike, marching to the Knesset or passing through the heart of Israel’s economic and cultural capital shouting “freedom” with their hands crossed in the air – asylum seekers made a show of force and determination. Their resistance to imprisonment and their demand for the right to establish themselves are no longer solely the subject of political debate but also the object of political agency. A fourth action which took place earlier on Saturday, in which Eritrean opposition members attacked a conference held by the Eritrean ambassador in the Galilee with sticks and stones, showed that while the majority of asylum seekers prefer the path of non-violence (at least those directed toward representatives of their native countries), others prefer to take a different path.

All this should be seen in both a local and international political context. Last week, following the first March of Freedom which reached his Jerusalem home, Prime Minister Netanyahu stated that asylum seekers should either “stay there [at the detention center, H.M.] or return to their countries.” Netanyahu knows very well that he cannot deport Sudanese and Eritrean asylum seekers due to the collective status they enjoy under the protection of the UN. However, that doesn’t mean he won’t try to force them out in any way he can, nor that he won’t do so if and when that protection is lifted. Just last week, hundreds were killed in South Sudan in an outbreak of civil war, and the refugees deported there from Israel in 2012, many of whom have been suffering from poverty and malaria, have been put in immediate danger. When South Sudan was founded just a year-and-a-half ago, refugees and activists warned against the deportation, precisely out of such fears.

With this in mind, and with Netanyahu’s offered “choice” of either remaining in prison indefinitely or returning to places of poverty, disease, tyranny and war, asylum seekers are starting to tell the government that they demand a third option – that of freedom and basic human rights – and that they won’t settle for anything less. It is the role of Israelis and the international community to join asylum seekers in these basic demands.