Israel Hayom, a pro-Netanyahu daily newspaper, redacted the prime minister’s name from a widely-published letter distributed by a man who tried to immolate himself at Saturday’s social justice protest in Tel Aviv.

There was considerable shock among social protest activists after a protester named Moshe Silman from Haifa set himself on fire yesterday, during a march in front of a government building in Tel Aviv. Mr. Silman saw his business collapse because of an unpaid debt;  many activists in Haifa knew him from previous protest events. The government’s refusal to provide Mr. Sliman with subsidized housing, even though he was unable to work due to his medical condition, touched on the main issue that ignited the protest movement last year – i.e., the lack of affordable housing.

Mr. Sliman is fighting for his life in a Tel Aviv-area hospital. Meanwhile, emergency rallies were held in Haifa, Jerusalem and Tel Aviv. Several protesters were detained by police for attempting to block roads.

Before setting himself on fire, Mr. Silman distributed a letter in which he blamed Prime Minister Netanyahu and Finance Minister Steinitz (as well as some low level government bureaucrats) for his troubles, and for “what the country is doing to people like me.” The letter was read by protesters in rallies and published by every major media outlet in Israel.

Every outlet except one, that is. Israel Hayom, the free daily published by rightwing gambling billionaire Sheldon Adelson, ran a photo of the letter but redacted the part criticizing the prime minister. The paper didn’t choose to publish only a part of the letter, but rather cropped out a couple paragraphs so the sentences about Netanyahu and Steinitz were completely deleted. The parts complaining about social security were left in the letter.

This is the paragraph that was deleted from the letter:

Here is a picture of the original letter (left) and the version which appeared on Israel Hayom (right). 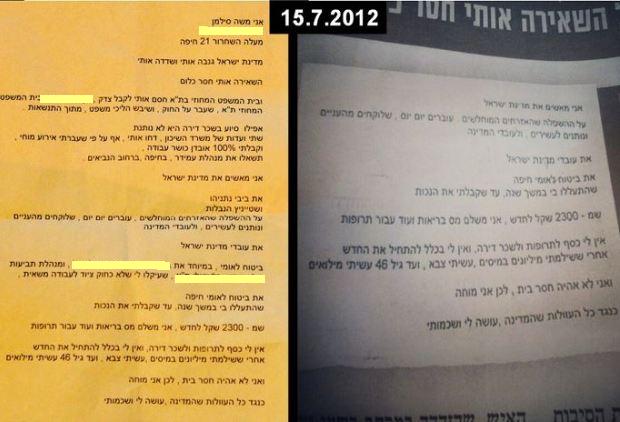 Israel Hayom is the most widely read paper in Israel. It is distributed for free at considerable loss by Mr. Adelson, who is a major supporter of Prime Minister Netanyahu and his wife, Sarah. Many people view the emergence of Israel Hayom as part of an effort by Netanyahu to take over the media and silence criticism against his policies.