There is a tendency on the Israeli right to express Schadenfreude when Europe is targeted by terrorists — especially when the perpetrators are jihadis. The subtext is that Israel is unfairly judged for its policies toward the Palestinians. 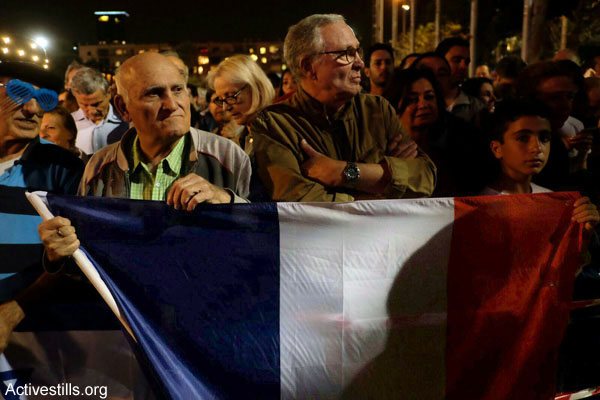 Israeli men stand with a French flag at the Tel Aviv memorial for victims of the Paris terror attacks, November 14, 2015. (Yotam Ronen/Activestills.org)

As social media reporting from Paris increased in pace and volume on Friday, a well-worn pattern emerged. Bursts of incoherent information were followed by news flashes from the wire services and the 24-hour satellite news channels. Rapid sharing of video clips filmed by eyewitnesses with smart phones and quickly uploaded to video sharing platforms like YouTube. As the reports start to repeat themselves, people start to get a bit bored. That’s when the commentary, recriminations, arguing and flat out tasteless tweets start to flow.

Yesterday on Twitter, the well-established pattern continued. As soon as it became obvious that the confused reports were repeating themselves and it would take awhile for the news organizations to frame the story in a more organized fashion, people started turning on one another. There were the “blame” tweets: attacks on people who had inadvertently shared unverified or incorrect information; sanctimonious comments about moral relativism given the outpouring of emotion and saturation coverage of the Paris attacks versus the relative silence over the Beirut bombings the previous day; and, of course, the left and the right attacked one another over gun control and the refugee issue.

There is a tendency on the Israeli right to express Schadenfreude when Europe is targeted by terrorists — especially when the perpetrators are jihadis trained by the so-called Islamic State (ISIS). The subtext is that Israel is unfairly judged for its policies toward the Palestinians. Netanyahu preaches to this crowd when he conflates Hamas with jihadis, name-checking them with ISIS, Boko Haram, Al Qaeda and so on.

Yesterday Dan Margalit, a veteran and well known Israeli journalist, wrote a tweet that gained him a shellacking of scorn from people who responded to him in Hebrew. In light of the EU’s decision to label products from Israeli settlements, and while the bodies in Paris were still being counted, Margalit wrote:

In order to save lives we should send medical aid and food from the settlements for the victims of Arab terror in Paris. And we should provide them with shelter and rehabilitation services in Ariel.

Ariel is a large West Bank settlement with a population of about 19,000.

What is one to make of the extreme narcissism, provincialism and mean spiritedness in Margalit’s tweet? The French don’t need Israel’s help. There is no rehabilitation facility in Ariel.

Margalit has been a journalist for decades. He was once widely considered — and perhaps by many still is — a respected political analyst. But he seems to have drunk the paranoid, self righteous, “Fortress Israel” Kool-Aid that Netanyahu pours so liberally in all of his public statements.

In his follow up tweet, Margalit wrote: “Jews of France, the Land of Israel is calling you.”

These horrific Paris attacks were not directed at Jews. Nor were they about Jews. But for Margalit, it’s always about him and his tribe.