Israel was created 64 years ago by refugees and for refugees. But despite its young age, the state seems to suffer from memory loss when it comes to dealing with the refugees who seek its protection today. 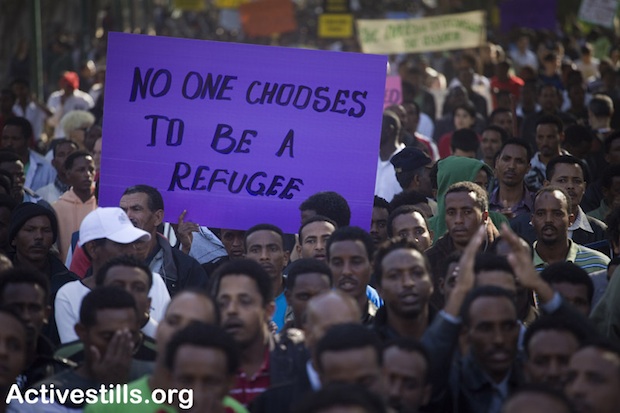 The Refugee Convention is celebrating its 60th anniversary this year. The young State of Israel was one of its enthusiastic supporters, hurrying to sign and ratify it, thereby legally binding itself to the convention’s principles.

During the 60 years that have passed, Israel has not legislated a refugee law, and all attempts made to that effect by Israeli human rights organizations and concerned Knesset members have failed.

In light of this, it is especially disturbing that the first Israeli law slated to directly affect refugees entering Israel is the “Prevention of Infiltration Law,” which will be up for discussion in a Knesset committee on Monday. Many of the MKs who support the law are likely children and grandchildren of such “infiltrators,” but their memory is short.

The proposed amendments to the Prevention of Infiltration Law passed a first reading in the Israeli parliament on March 30, the final day of the winter session, thus preventing the opportunity for public discussion. Hearings were conducted in the Knesset Interior Committee during the summer recess, despite the absence of the committee members and despite their requests to postpone the hearings.

A similar bill was withdrawn in July 2010 after harsh public criticism. The current law up for amendment is an emergency law, originally passed in 1954 to cope with the infiltration of Arabs who the state claimed sought to sabotage Israeli security. While the previous bill cynically used a security claim to justify draconian measures against desperate people, the present amendment states clearly that its purpose is deterrence: “The expectation is that the detention period will stop the massive infiltration or at least minimize it,” I have heard countless politicians say.

The proposed amendments do not distinguish between terrorists, migrant workers and asylum seekers fleeing for their lives. The law will enable the Israeli authorities to hold in administrative detention for up to three years migrant workers and asylum seekers with their children, just because they entered through Egypt without proper permits. Citizens and residents of “enemy” countries, including survivors of genocide and their children from the Darfur region of Sudan, could be subject to indefinite detention, as the proposed bill stipulates that persons originating from such countries or areas are not to be released under any conditions.

The first paragraph in Article 31 of the 1951 Convention Relating to the Status of Refugees states: “The Contracting States shall not impose penalties, on account of their illegal entry or presence, on refugees who, coming directly from a territory where their life or freedom was threatened in the sense of Article 1, enter or are present in their territory without authorization, provided they present themselves without delay to the authorities and show good cause for their illegal entry or presence.”

Asylum seekers, upon arrival in Israel from the Sinai desert, usually sit down on Route 10 and wait for the IDF patrol to collect and transfer them to Saharonim prison near the border with Egypt. They want to be registered and recognized.

But among the 149 asylum seekers it recognized as refugees in the last 60 years, Israel has not recognized even one Sudanese or Eritrean national. According to the Ministry of Interior, 97 percent of the “infiltrators” who entered in recent months are citizens of Eritrea and Sudan. The majority escape Eritrea, where gross human rights violations, according to the 2010 Human Rights Report of the US State Department, include “unlawful killings by security forces; torture and beating of prisoners, sometimes resulting in death; abuse and torture of national service evaders; harsh and life-threatening prison conditions; arbitrary arrest and detention, including of national service evaders and their family members.”

One cannot help but assume that Israeli decision-makers avoid reading such reports. Only by sticking to their ignorance can they continue to insist that prolonged detention in a country like Israel, together with the slight hope for ultimate freedom, is worse than their lives of slavery in the dictatorship of Eritrea.

If the law passes, it will fail to fulfill its purpose: human rights organizations will challenge it in the Supreme Court and in the meanwhile, the government of Israel will spend millions of shekels to imprison men, women and children fleeing for their lives.

Despite what the clerks of the Interior Ministry keep insisting, none of those refugees will ask to be returned to Eritrea, when they know what is waiting for them in their country’s underground prisons.