Israel’s latest operation has brought about an end to the notion that Gaza can be separated from the rest of Palestine.

The current war in Gaza demands we revisit the circumstances surrounding Israel’s “disengagement” from the Gaza Strip in 2005. Supporters of the war often claim that Israel left the territory and “got rockets in return.”

The first rocket was fired from Gaza in 2001, but there is a more important point to be made here: one cannot evacuate a certain part of the occupied territories and expect the problem to be solved – at least in that particular area – while more settlements are being built and there is less freedom elsewhere. The national drama surrounding the evacuation of 9,000 settlers in 2005 disguised the fact that Israel never ended the occupation; it merely rearranged its forces (and some of the civilian population). Just like it did with Oslo.

The events leading up to the siege demonstrate that pretty clearly – Hamas, after all, won the 2006 elections, but Israel denied it its victory. Just like other occupying powers, Israel insisted, and still does, on using its veto power in internal Palestinian politics. The rest is well known: having been left out of the political process, Hamas took Gaza by force and launched attacks on Israel, leading to Israel placing the Strip under siege, which didn’t end even when ceasefires were reached.

These events could have been expected, but in a way they served what the Israeli government perceived as its own interest. The object of the disengagement was to prevent the creation of the Palestinian state – relieving the pressure on an area that Israel had trouble maintaining in order to hold on more tightly to other parts. This was no secret; even Ariel Sharon’s top aid, Dov Weisglass, said as much on record in an interview with Haaretz.

The bottom line is that Gaza and the West Bank are a single unit. This was demonstrated again and again in the last decade, including in the run-up to this war, which had much to do with the widespread operation Israel carried out against Hamas’ political leadership in the West Bank after the abduction of the three teenagers. An action taken in one place leads to a response in another. It is now clear even to Israelis that one cannot simply “get rid of Gaza”; the Strip is once again understood as part of the greater Palestinian issue. And this is Hamas’ greatest achievement in this war.

Conflicting forces of separation and integration are at work between Israel and the territories it occupied in 1967. If Cast Lead and Pillar of Defense were parts of the ongoing effort to isolate besieged Gaza, this military campaign seems to bring about an opposite outcome. Any foreseeable end to Operation Protective Edge will probably include some mechanism that would reconnect Gaza to the Palestinian Authority, and through them to Israel. There is even the option that Israel will decide to re-occupy the entire Strip, though this still seems unlikely. 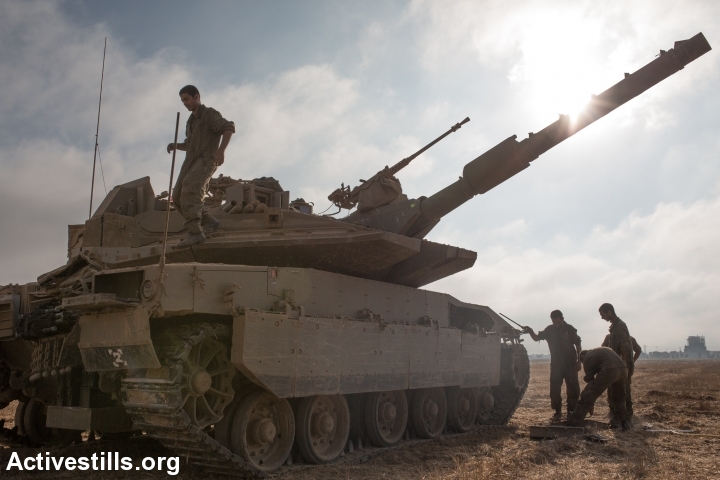 An Israeli tank is seen before entering the Gaza Strip near Israel’s border with the Gaza strip on July 24, 2014. (photo: Activestills)

At this point, it seems that nobody in Israel has given much thought to the goals or the exit strategy of this campaign. Naturally, Israelis would like to see the arrangement Israel has in the West Bank installed in Gaza – a proxy government whose main function is to protect Israeli citizens and prevent another uprising, financed by the international community and under Israeli supervision. The Egyptians would be happy with such a solution as well.

Related:
Why Israel won’t sign any ceasefire that’s fair
Israel has alternatives to this war