Israeli and international activists march in solidarity with the East Jerusalem neighborhood as families brace for a new wave of evictions. 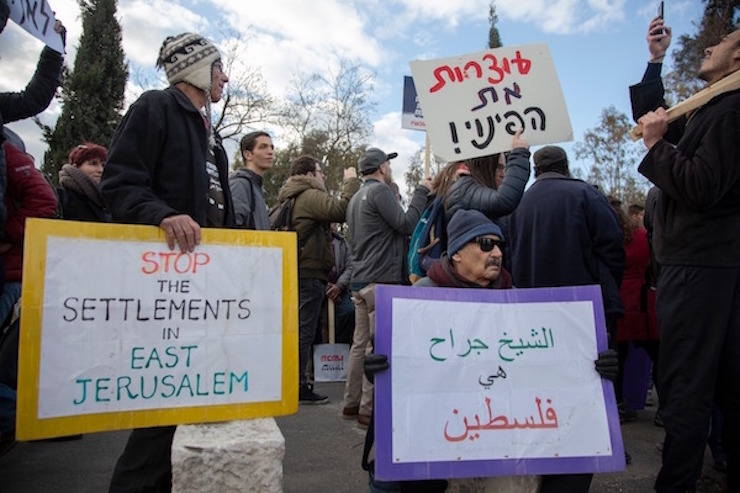 Hundreds of activists marched from West Jerusalem to the East Jerusalem neighborhood of Sheikh Jarrah to stop the eviction of Palestinian families there, on January 18, 2018. (Activestills.org)

Hundreds of Israeli and international activists marched from central West Jerusalem to Sheikh Jarrah, a Palestinian neighborhood in East Jerusalem, on Friday, in solidarity with the families there who Israeli authorities want to evict.

In late November, Israel’s Supreme Court rejected the Sabag and Hamad families’ appeals against their evictions. Residents of Sheikh Jarrah fear that decision could lead to a new wave of evictions affecting as many as 11 families and 500 people.

“We were shocked,” Muhammad Sabag, 74, said in an interview in December. “We waited for a decision for a long time, but we were not ready for such a blow.”

Residents of the neighborhood and activists with Free Jerusalem, a group organizing against Israel’s military occupation, initiated Friday’s action in order to bring attention to the families’ cases and to try and stop their evictions. Other organizations, including Peace Now and Combatants for Peace, also participated in the protest, said Sahar Vardi, an organizer with Free Jerusalem. 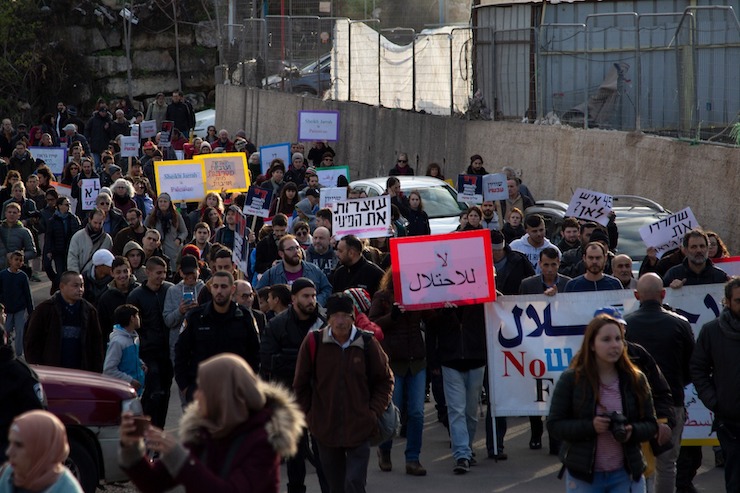 Israeli, international, and Palestinian activists march in the East Jerusalem neighborhood of Sheikh Jarrah against an expected new wave of demolitions, January 19, 2019. (Activestills.org)

As protestors were gathering at their meeting point, a man grabbed one of the activists’ glasses off his face and crushed them in his hands, said activist Daniel Roth, who participated in Friday’s demonstration. People who were opposed to the action also yelled hateful, racist statements as the protesters marched into Sheikh Jarrah, added Roth.

When demonstrators reached the neighborhood, Palestinian residents and organizers joined the action. Toward the end of the protest, while activists were standing outside one of the homes of the families facing eviction, Israeli police attacked a man holding a Palestinian flag, said Roth. Activists then stood between the man and police forces, and began chanting “end the occupation” until police backed off.

“At the core of this whole thing is the idea that all people have a right to a home, and what’s going on here is that the powers that be are taking homes from some people because of their national identity, period,” said Roth in a phone interview after activists dispersed. “What we’re looking at is racist policy and action around people’s very homes, and that should wake people up to stand up with these folks.” Hundreds of activists marched from West Jerusalem to the East Jerusalem neighborhood of Sheikh Jarrah to stop the eviction of Palestinian families there, on January 18, 2018. (Photo courtesy of A. Daniel Roth)

In the 19th century, a small Jewish community lived Sheikh Jarrah. By 1948, most of its Jewish residents abandoned the area as East Jerusalem came under Jordanian rule. In 1956, 28 Palestinian refugee families from West Jerusalem were settled there through an agreement reached between Jordan and UNRWA.

When Israel occupied East Jerusalem in 1967, the Palestinian families who had been living in the neighborhood since the 1950s were allowed to stay. But in recent years, several of these families were evicted as a result of Israeli court decisions to recognize pre-1948 ownership claims made by two Jewish bodies, the Sephardic Community Committee and the Knesset Israel Committee.

In 2003, a U.S.-based company named Nahalat Shimon purchased the land from the two Jewish community councils. It is unclear who owns Nahalat Shimon. What is clear is that it is trying to put Israeli settlers in homes currently occupied by Palestinians.

In response to these evictions, Palestinian and Israeli activists started a protest movement in 2009 that eventually mobilized thousands to demonstrate in the neighborhood every week against both evictions. The struggle led to pressure in the media and the international community and the evictions came to a halt. Since then, Israeli authorities have evicted only one family in Sheikh Jarrah.

Although implemented according to Israeli legal and justice systems, the evictions set a political double standard that justifies Jewish claims to property held before 1948, but does not allow Palestinians to make similar claims to properties they were forced to leave in West Jerusalem.