According to the Popular Struggle Coordination Committee (PSCC), an Israeli military sniper used live fire against protesters during the weekly demonstration in Nabi Saleh today, injuring one. The protester, who was shot in the thigh, was evacuated to a nearby hospital. The army reportedly used a 0.22″ ammunition, which is forbidden from being used as crowd control. 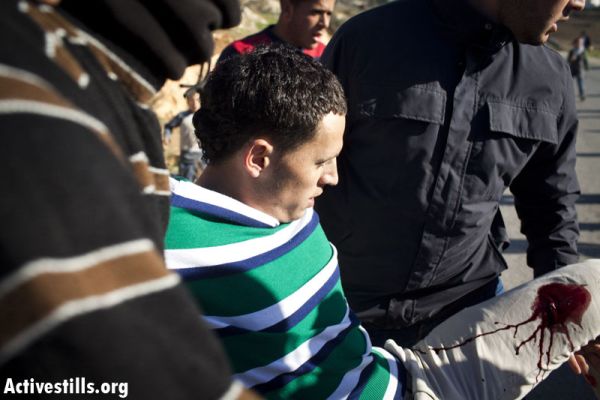 The use of the Ruger rifle, which shoots the 0.22″ munition, was banned in 2001. The prohibition on using the Ruger for crowd control came after numerous Palestinian protesters , including children, were killed by the weapon. The Ruger is used as a sniper.

Today’s shooting comes two weeks after an Israeli soldier shot Palestinian protester Mustafa Tamimi in the face with a tear gas canister at close range, an action which violated military protocol on the firing of tear gas. Tamimi died the following morning from the injury.

In another violation of Israeli military regulations, soldiers fired tear gas directly at a Palestinian journalist, striking the man in the leg.

As they have every Friday for the past two years, protesters at Nabi Saleh were attempting to reach the village’s spring, which has been appropriated by the nearby Jewish settlement of Halamish.