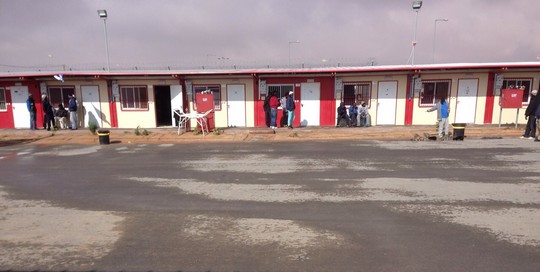 “Despite the freezing cold the Israel Prison Service, which operates ‘Holot,’ is not providing or installing electric heaters, air conditioners or radiators in the [aslylum seekers’] rooms — and is not even letting [them] bring in and use their own electric heaters into their rooms,” the Hotline for Refugees and Migrants and the Association for Civil Rights in Israel (ACRI) wrote in the petition.

The High Court ordered the State to respond to the petition by Monday afternoon.

Attorney Oded Feller of ACRI argued in the petition that the law requires that “the detention facility provide its detainees with adequate living conditions,” and that the lack of heaters in the current winter weather violates the law and is forbidden.

Feller requested an urgent hearing and an injunction saying that until adequate heating is provided, that asylum seekers not be required to be present at the facility at night. Additionally, he asked that they asylum seekers be permitted to use their own heaters.

This past weekend the temperature at Holot dropped to minus-two degrees Celsius (28 Fahrenheit). Asylum seekers housed there said that prison authorities refused to allow them to bring heaters into their rooms, claiming that they pose a fire hazard. 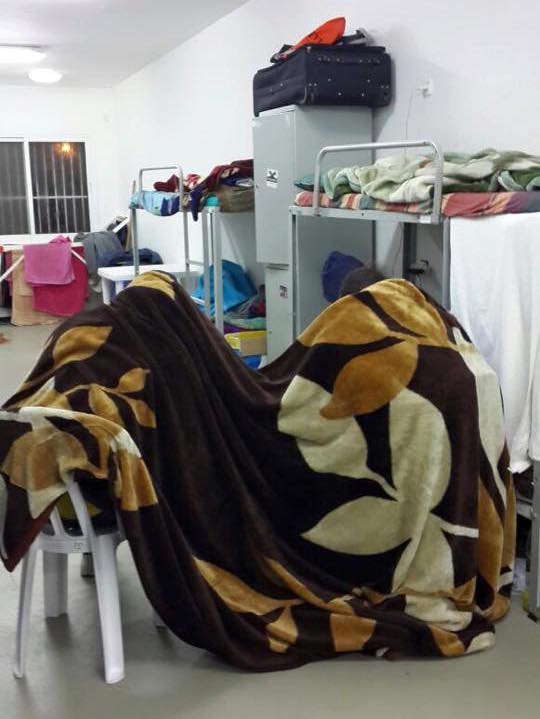 An asylum seeker lies under blanket inside a room at Holot, December 10, 2015. (Photo by an anonymous asylum seeker, courtesy of Mothers Against Holot)

Following news reports about the heating situation and the intervention of two members of Knesset, MK Dov Khenin (Hadash) and Michael Rozin (Meretz), the Prison Service provided small heating pads to asylum seekers. The asylum seekers said that only three were given to each room housing 10 people, however.

T., an asylum seekers being housed in Holot, told +972’s Hebrew-language sister site Local Call, “We didn’t get anything. The heating pads they gave us weren’t enough for anything.”

Some 100 members of a group called “Mothers against Holot” demonstrated outside Tel Aviv’s Dizengoff Center mall against the conditions of asylum seekers being detained at the desert detention facility Saturday night. 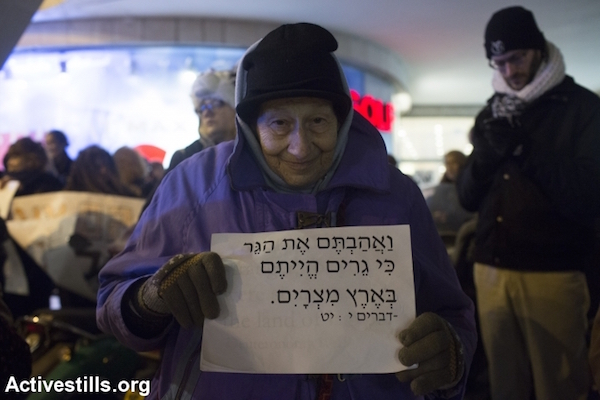 An activist with “Mothers Against Holot” holds a sign reading quoting from the biblical passage, “And you shall love [the strangers] as yourself; for you were strangers in the land of Egypt,” January 10, 2015, Tel Aviv. (Photo by Oren Ziv/Activestills.org)
Noting the freezing temperatures and lack of heaters, one of the protest organizers, Hana Raz, said, “What would we do if these were our own children? This place should have been closed a long time ago.”

“Many of the asylum seekers do not have any family in Israel, let alone mothers,” Another organizer, Sigal Avivi, explained. “We need to show them love, respect, understanding —  not imprisonment and abuse.”

Over 2,000 African asylum seekers from Sudan and Eritrea are currently being held in Holot without charge or trial, under Israel’s Prevention of Infiltration Law. Israel’s High Court has twice invalidated the law, only to have the government pass new versions of it.

A petition against the latest version of the law is currently pending in the High Court.