Nobody knows what happened last week at Qalandiya checkpoint, where a Palestinian woman was killed together with her brother. And until police release the CCTV footage, nobody will. 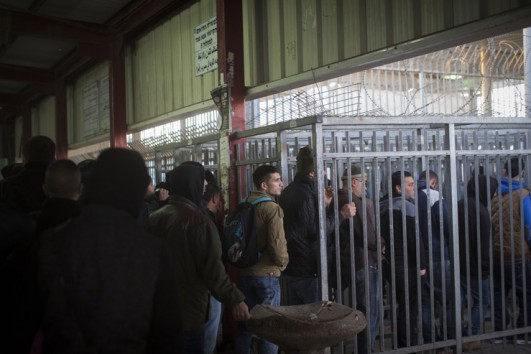 Thousands upon thousands of people pass through the Qalandiya checkpoint every day. (Activestills.org)

The wanton coverage the killing got in the Israeli media made it clear instantly that something wasn’t quite right – beyond the ongoing injustice of the occupation.

Following increasing pressure from MKs Zehava Galon (Meretz) and Dov Khenin and Ahmad Tibi (Joint List), as well as Local Call and Haaretz newspaper, the Ministry of Public Security was forced to admit that they were killed by outsourced security guards, employees of the security services company Civil Intelligence.

On Monday it was reported that following an internal investigation, the company vindicated the killers of any wrongdoing. However, one crucial detail was missing in the investigation: the CCTV footage that recorded the incident was never published, and never given to the company. It is still being withheld by police.

Regardless of the CCTV footage, the evidence adds up to paint a disconcerting picture. The police refusal to release the footage and the Civil Intelligence’s slapdash investigation points to one conclusion: That the brother and sister did not pose any danger.

Let’s unpack the facts as we know them:

The arrival at the checkpoint: Twenty-three-year-old Maram, a mother of two, was walking with her 16-year-old brother Ibrahim towards the Qalandiya checkpoint. The family said that she was on her way to receive medical treatment, and that was the first time she received permission to pass through the checkpoint.

The shooting: There are two partly complementary, partly contradictory versions. Police say that at some point Maram and Ibrahim were told to halt, but she started walking backwards and hurled a knife at them from a 15-20-meter distance (Maram apparently had quite impressive aiming skills). According to Palestinian eyewitnesses, Maram and Ibrahim were marching on the road, rather than the pedestrian lane, and were told in Hebrew to stop.

Once she was told to stop, both versions concur, she was shot by the security guards. Her brother – who at no stage was suspected of attempting to attack them – bent over to help her and was shot as well. All in all, Maram and Ibrahim took 15 bullets. The shooters were aiming from a safe distance, probably behind concrete barriers.

The death: After they were shot, the soldiers and policemen present prevented a Palestinian ambulance from reaching the wounded siblings. According to eyewitnesses, anyone who tried to approach them was fended off with tear gas. Maram and Ibrahim lay on the road and slowly bled to death.

The CCTV and classified footage: Qalandiya checkpoint, just like any other in the West Bank, is hermetically covered by CCTV. In many cases in the past, when the army and police claimed that a Palestinian attempted a stabbing attack, they released the CCTV footage as corroboration. In this case, the police haven’t done so for almost a week.

Contacted by Local Call, an Israel Police spokesperson said in response: “The incident is still under investigation. We are prevented from commenting until it is completed.”

The outsourced security guards: Following queries from politicians and the media, the police admitted on Sunday that the initial reports that Maram and Ibrahim were killed by police were false. They also said that the police gave them a warning (which wasn’t necessarily supposed to lead to their death) and shot a bullet in the air, but the security guards ended up shooting them.

Leaving aside the inherent injustice of the occupation for a minute, this incident raises some very challenging questions.

1. Why did they have to die? Clearly, according to the evidence we have, there was absolutely no reason to kill them. As the police themselves said, the incident could have ended with their arrest.

2. Why was Ibrahim shot, even though he posed no danger at all? In none of the official responses, and I looked at all of them carefully, did anyone claim that Ibrahim took out a knife or threatened anybody. Still, the statements said that “two terrorists were killed” and that after the event knives were found on Ibrahim’s dead body. It seems concocted to me.

3. WHY THE HELL WERE 15 BULLETS FIRED FROM A 15-METER DISTANCE? And why did they prevent medical staff from treating them? How could they feel threatened behind concrete barriers, armed to their teeth, with so many troops around them? And the threat was (at best), two young people carrying a knife. It sounds like an execution, but police say it wasn’t. I’m still trying to figure out what else it could have been.

4. Why are the police not releasing the footage? That question speaks for itself. What have they got to hide?

5. Are outsourced security guards (mercenaries, if you will) allowed to take away people’s lives? This seemingly innocuous detail potentially frames the whole thing as an execution, a murder. Police were present, and they were allegedly operating according to the rules of engagement, but then they were outflanked by the private gunmen.

Beyond the issue of how privatization even pervades the security sector, the question that arises is the following: Are they bound by the army’s rules of engagement? Can they be held accountable by a military inquiry (not that there’s too much to expect from those, but still). Or are we seeing a phenomenon of mercenaries manning Israel’s checkpoints?

Alon-Lee Green is a political activist. This article was first published in Hebrew on Local Call. Read it here.

Correction:
A previous article erroneously stated that Maram Salih Hassan Abu Ismail was pregnant when she was shot and killed. The detail, which was originally reported by other media outlets, could not be corroborated and was therefore deleted from the article.