A page has emerged from Haaretz’s daily op-ed pages, printed before the murder but never distributed; strangely enough, the coverage of GOP-Likud relations in a piece in the page remains as relevant as ever.

Yesterday was the 17th anniversary of the murder of Prime Minister Yitzhak Rabin. Rabin’s right-wing assassin, a law student from Bar-Ilan University named Yigal Amir, shot him at close range following a peace rally in Tel Aviv. It was Saturday night, at 9:42 p.m.

Papers print many of their pages in the afternoon and early evening, as did Haaretz that day. Naturally, when news of the assassination arrived, the daily ‘B’ supplement of political op-eds and TV and radio listings became irrelevant. It wasn’t distributed.

In the 90s, Haaretz sometimes wrapped its news deliveries with printed but unused pages. So it happened that in December 1995, Hanan Cohen received his newspaper wrapped with the pages of a paper from an alternate reality – one in which the prime minister was never killed. Cohen scanned and posted those pages on his Hebrew blog. With his permission, I am re-posting some of the items here. 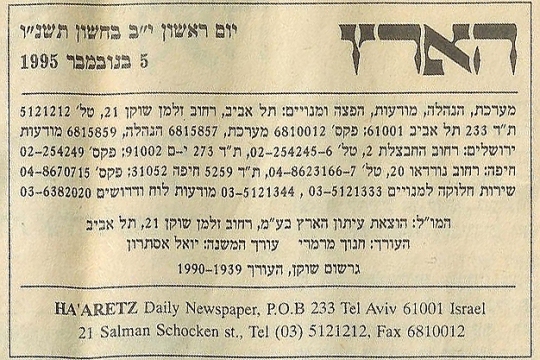 The daily cartoon referred to the changes that commercial television – which had been introduced only a couple of years earlier – brought to Israeli life. The woman is seen asking the man, “Did you set up the VCR (to record the rally)?” Israelis were just beginning to realize that if something wasn’t on TV, it probably never happened. The cartoon also shows how important the rally was – it was the event that everyone talked about that week, the much anticipated answer to the wild protests that the right has been holding against the government.

The most interesting piece in the B supplement is this op-ed by Akiva Eldar, then Haaretz correspondence to Washington. It touches on what had become a growing problem for the government around those days: the attempts of the Republicans – coordinated with Likud leader Benjamin Netanyahu – to derail the fragile peace process. Eldar reports on how GOP leaders in Congress Bob Dole and Newt Gingrich tried to embarrass the Clinton administration with a decision to move the American Embassy from Tel Aviv to Jerusalem.

Knowing that this move might damage the ability to reach a final-status agreement with the PLO, the Israeli government privately objected, but as Eldar reports, AIPAC and the Presidents Conference had the upper hand. A few days later, the lobby and Congress recognized another opportunity to poison Israeli-Palestinian relations. Eldar wrote:

Less than a week later [after the decision on the embassy] the law suspending the American ban on negotiations with the PLO and economic aid to the Palestinians was about to expire. Due to disagreements on matters that have nothing to do with the Palestinians, Dole refused for three days to prompt the head of the Senate Foreign Affairs Committee, Jesse Helms, to temporarily extend the validity of the law.

Congress wasn’t so impressed with claims made by the State Department according to which shutting down the PLO delegation to Washington would humiliate the Palestinians. The legislators are not listening to warnings from the Israeli Embassy – let alone the Palestinians – that they are sabotaging the atmosphere of reconciliation between the two peoples. The case of the Jerusalem embassy reminds us that they [the legislators] pay more attention to the voices coming out of the offices of the Presidents Conference and AIPAC.

This piece never made it to Haaretz’s readers. Six months after Rabin’s murder, Benjamin Netanyahu was elected prime minister, and the government in Jerusalem, AIPAC and Congress were in sync again. 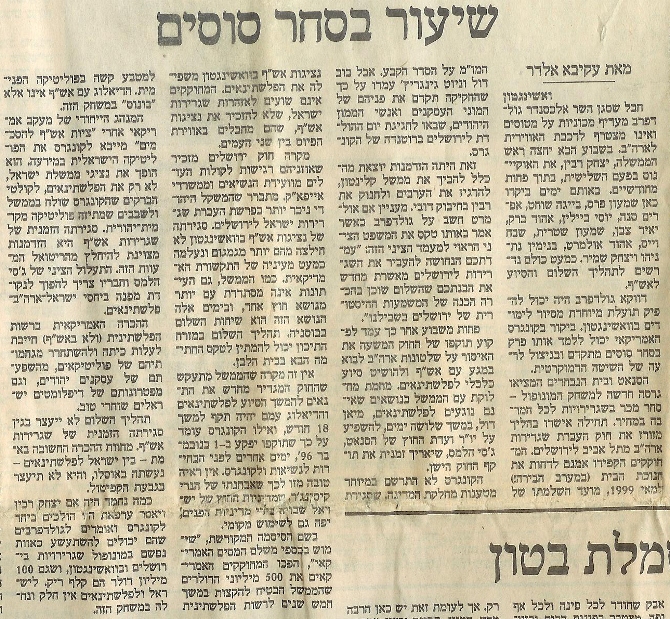 And this Archive picture also trended on the social networks this week: Netanyahu at a protest calling for Rabin’s death, with Hangman’s knot and a coffin near him.