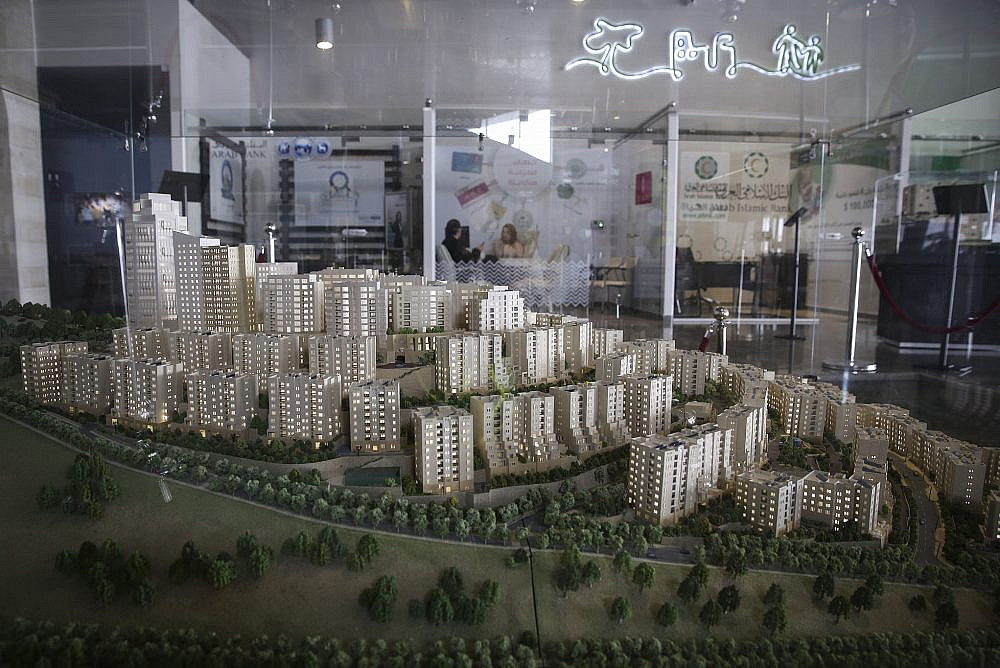 A model of the new Palestinian city of Rawabi is displayed at the center of the Rawabi project site, Feb. 23, 2014. (Hadas Parush/Flash90)

“Palestine is Throwing a Party and the Whole World is Invited: Capital and State Building in the West Bank,” by Kareem Rabie, Duke University Press, 2021

Politics often define the horizons for scholarship, especially in Israel-Palestine. In his 1996 classic “Comrades and Enemies: Arab and Jewish Workers in Palestine, 1906-1948,” historian Zachary Lockman encouraged scholars to abandon the assumption that Israelis and Palestinians were distinct communities that ought to be studied as separate fields. Instead of this “dual society” approach, he argued, scholars should pay closer attention to the deep connections between the two peoples’ histories, thus arriving at a “relational” understanding.

Lockman’s call for such integration, which emerged during the era of the Oslo Accords, was in line with the spirit of the 1990s: despite his deep concerns about the Oslo process itself, his position reflected a time when expressions of a commitment to peace by Israeli and Palestinian leaders, however symbolic, seemed to be opening up new possibilities for the region.

The years since Oslo’s demise, however, have been unkind to scholars and activists trying to promote Lockman’s “relational” approach to Palestine and Israel studies, with the two fields standing as far apart as ever. The lion’s share of the blame for this retreat falls on the Israeli state, which has long abandoned even the rhetorical aspiration to peace in favor of a hard-hearted emphasis on “separation” from the Palestinians — a psychological distancing enforced by concrete walls, death-dealing drones, and a vast apparatus of repression.

Over the same period, Palestine studies have become increasingly dominated by the framework of “settler colonialism,” defined as a type of foreign rule in which the destruction, dispossession, and displacement of the indigenous population play a central role. This analytical approach, in Lockman’s terms, can be strongly “relational,” insofar as it highlights how the regime’s invasive drive impacts both the colonizers and the colonized. But when scholars decline to ask how people come to be categorized as “indigenous” or “settlers” to begin with, and how such categorizations may change over time, they risk falling into an essentialist view which sees any contact between the two collectives only as destructive, never as productive of new realities that can profoundly affect both. 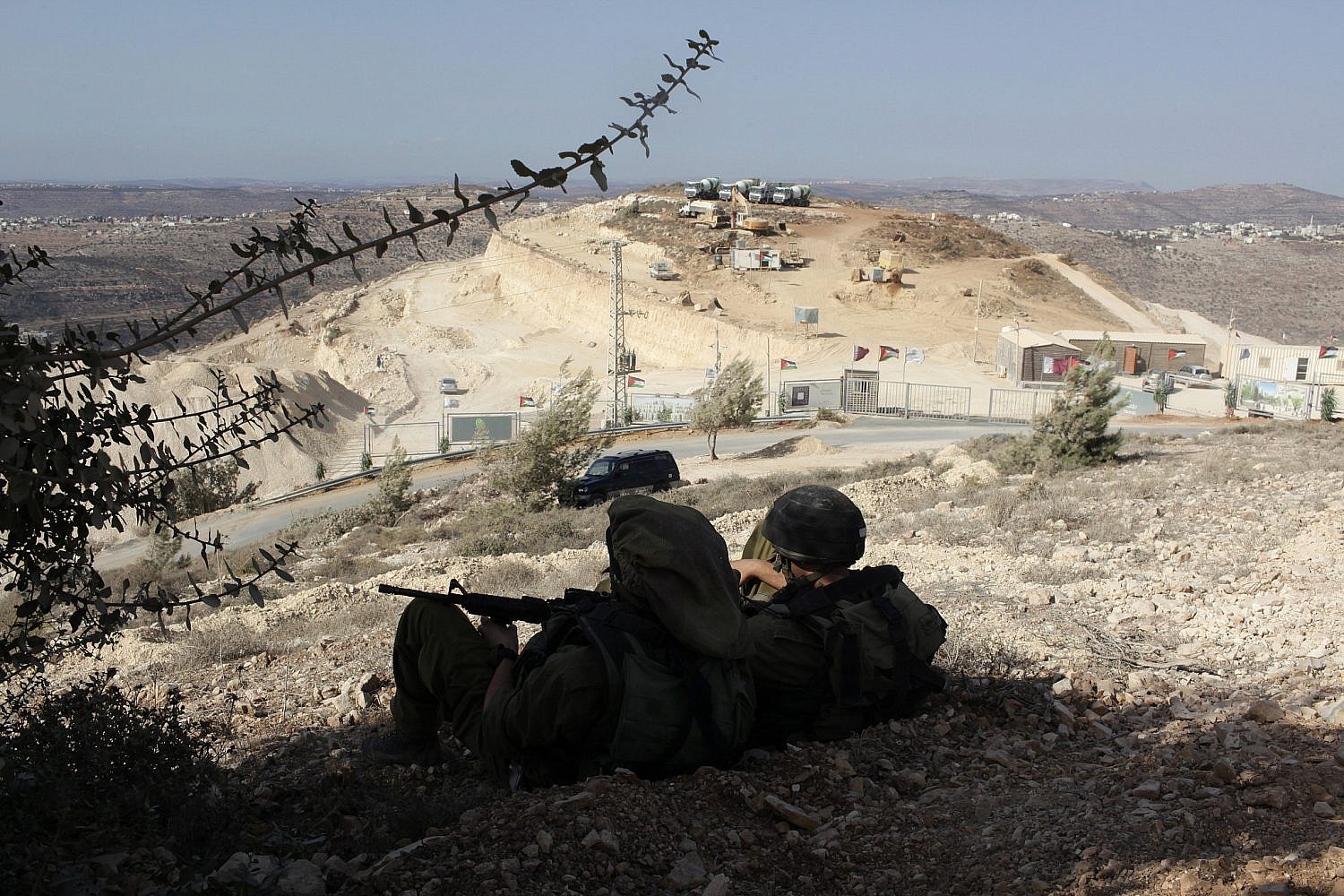 Despite the state’s attempts at separation, Israeli and Palestinian societies remain intimately linked, and critical scholars interested in debunking propaganda should trace these links. Kareem Rabie’s new ethnography, “Palestine is Throwing a Party and the Whole World is Invited: Capital and State Building in the West Bank,” does precisely this.

The book provides a close investigation of the media hype, financial maneuvering, and political controversy surrounding the establishment of the new city of Rawabi in the occupied West Bank, applying the settler-colonial analytic in the context of global, neoliberal capitalism. Building on this work, Rabie argues that, despite the extreme and structural power imbalance between the two sides, Palestinian and Israeli development practices often “mirror” one another in distorted, even grotesque ways.

Rawabi is a planned, private city and the brainchild of real-estate mogul Bashar Masri, often titled “the world’s richest Palestinian.” Large portions of the site, which stretches across scenic hills north of Ramallah, were confiscated by the Palestinian Authority (PA) from neighboring villagers for “public purposes.” With approval from the Israeli occupation authorities and with the assistance of Israeli planners, the land was handed over to companies controlled by Masri in a process which Rabie describes as typical of today’s West Bank, where “public aid does not operate to aid the public” but “to strengthen the private sector.”

Progressive Palestinians were incensed by this process, with many going as far as to call Rawabi a “settlement.” As if to prove their point, the city’s administrators even hatched a short-lived plan to cooperate with the Zionist movement’s most significant instrument of dispossession, the Jewish National Fund, in a tree-planting project. Ironically, and in one of the most blatant instances of “mirroring” addressed by Rabie, the right-wing Israeli NGO Regavim mobilized the human rights discourse pioneered by Palestinians and their allies to position Rawabi as an illegal occupying force and Israeli settlers as victims of discriminatory practices. 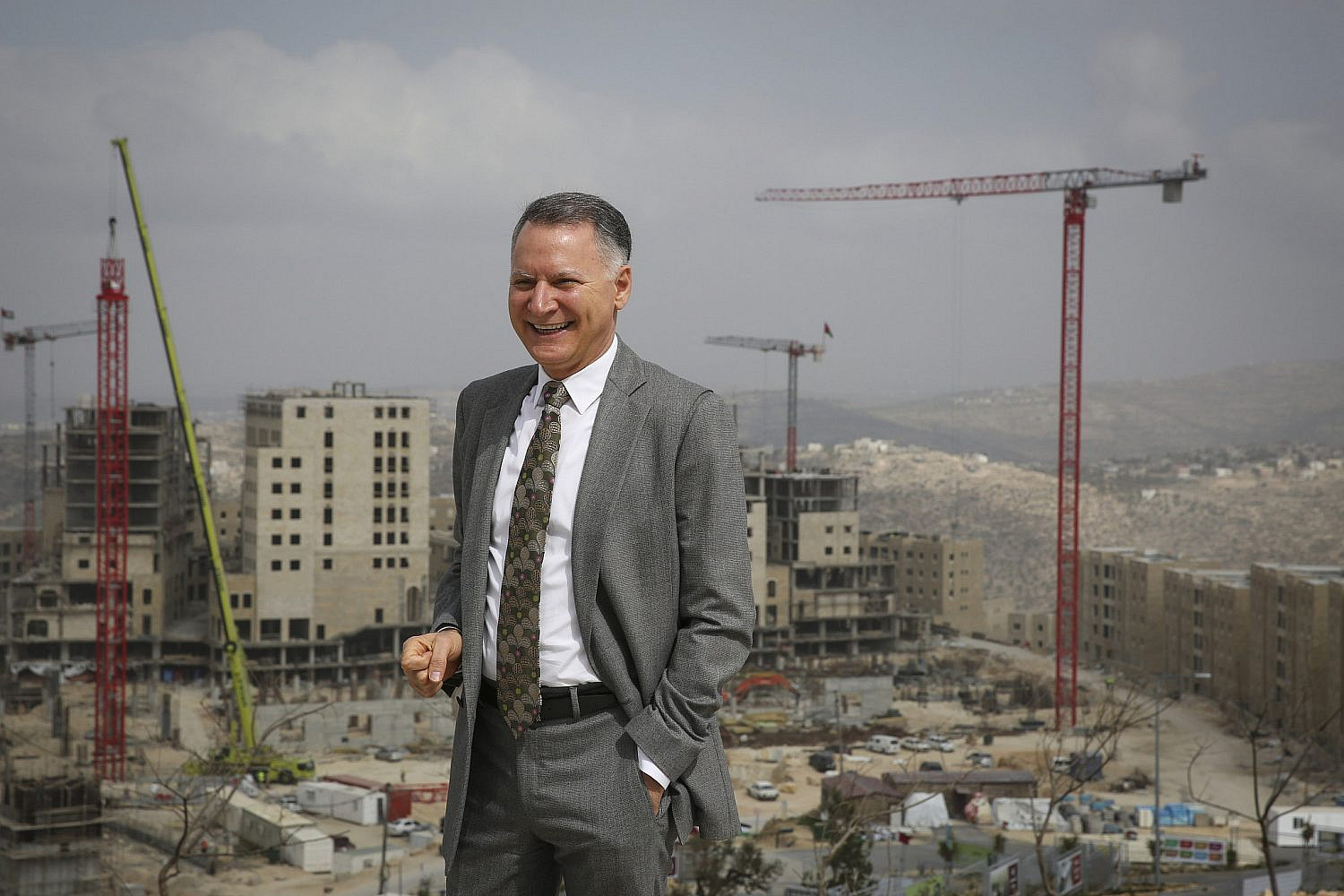 Palestinian entrepreneur, Bashar al-Masri, seen in front of a view of his residential project of Rawabi, Feb. 23, 2014. (Hadas Parush/Flash90)

At a total cost approaching $1.5 billion dollars for Masri and his Qatari partner company LDR, Rawabi can be deemed a failure as far as providing housing for West Bank Palestinians is concerned. When construction began in 2010, the city was projected to eventually provide homes for around 40,000 people. But a decade later, sociologist and Rawabi resident Maisalon Dallashi estimated that less than 5,000 homes were inhabited; of these, many were only occasionally visited by their owners, most of them Palestinian citizens of Israel who had bought them for investment purposes.

These later developments are only cursorily discussed in the book, which focuses on the formative period around 2010, but Rabie’s analysis makes them clearly comprehensible. He argues that in the mid-2000s, Palestinian political and economic elites turned their energies from campaigning for independence to a market-driven vision of “development,” in which the formation of an indigenous middle class played a central role.

Businessmen like Masri consolidated their fortunes during the Oslo era through joint ventures with Israeli firms. Following the collapse of the Second Intifada around 2004, these powerfully connected actors convinced the PA’s leadership that armed struggle was futile and that Palestinian prosperity would best be served by an “economic peace” of the kind preferred by former Prime Minister Benjamin Netanyahu and other Israeli politicians. In the elites’ new vision, the national value of sumud — tenacious steadfastness to the land — would no longer be exemplified by the self-sufficient peasant, but by the responsible breadwinner and homeowner.

In a brilliant application of Marxist-feminist social reproduction theory, which echoes the arguments of anthropologist Hadas Weiss, Rabie argues that Rawabi’s boosters sought to create a “new” Palestinian middle class, characterized not by its income bracket but by its household organization: a home-owning nuclear family on the Western model. 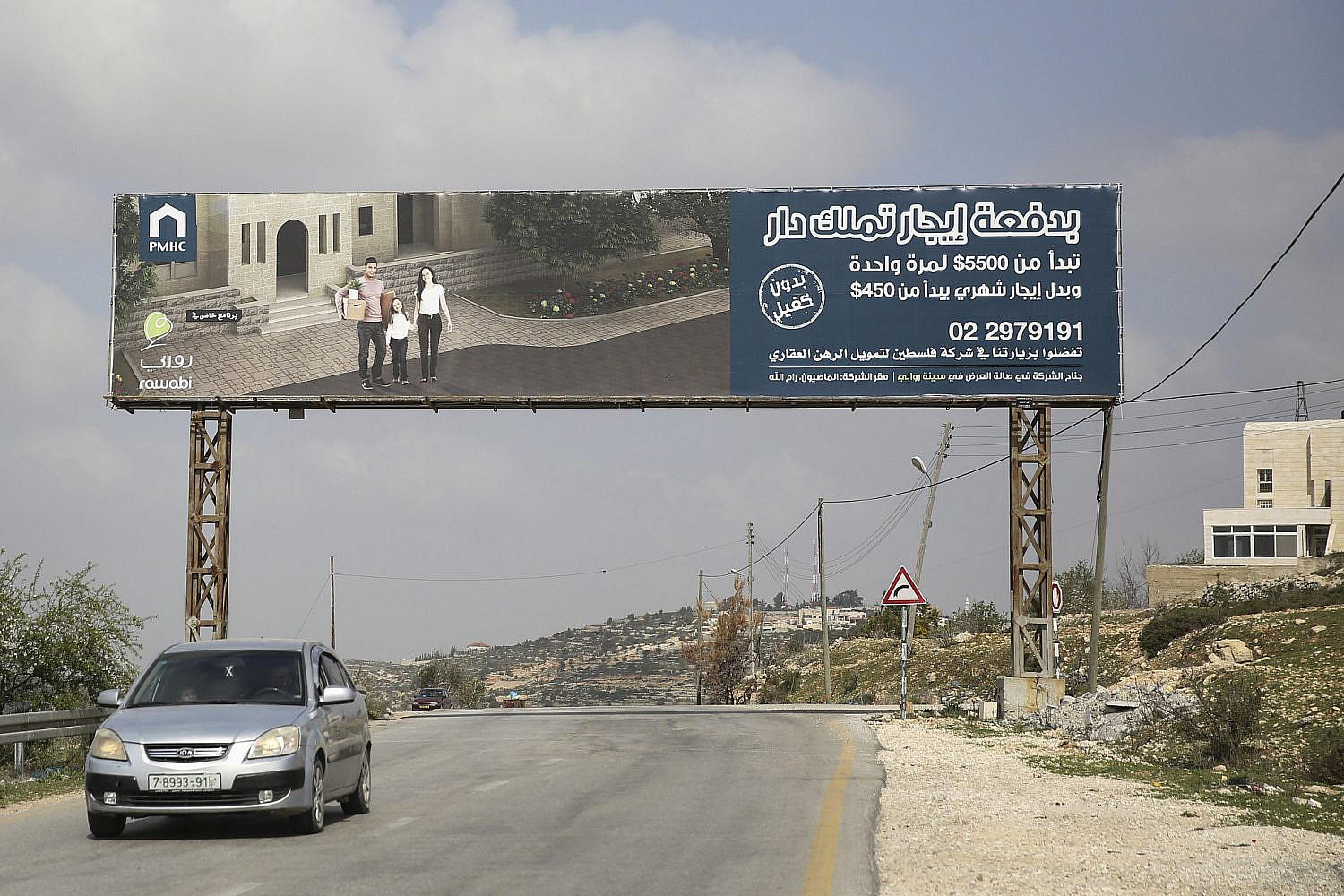 The emergence of this class would depend on young Palestinian couples abandoning the common practice of residing near the husband’s parents and of pooling financial resources and caretaking labor with his extended family. Instead, the new Palestinians would “mirror” their Western counterparts by buying apartments in Rawabi’s high-rise buildings, where they would be surrounded by similar families. The long-term mortgages required for this purchase would then tie these families to their new community and encourage them to act as rational, income-maximizing units.

The predictability of failure

The obvious problem with this strategy is that Palestinian livelihoods in the West Bank are made meager and unstable by Israel’s decades-old policy of strangling the economy of the occupied territories, and of keeping the Palestinian residents dependent on work in Israel and handouts from the international community. As a result, Rawabi’s brand of relatively upscale housing proves prohibitively expensive for all but the wealthiest residents of the West Bank. For a middle class to emerge under occupation, a housing market must be constructed with outside help; and so, Masri enlisted international funding agencies to provide generous backing funds in order to make the mortgage financing of Rawabi homes affordable for greater numbers.

This process can also be seen as a form of “mirroring:” as radical sociologist Avishai Ehrlich argued in the 1970s, the development of Israeli capitalism depended heavily on one-way capital flows from abroad that were funneled through the state. But the contrast between the Israeli shnorr and the Palestinian one is stark. Over its first century, the Zionist movement successfully plowed Jewish philanthropy, German reparations, and U.S. military aid into a powerful, export-oriented industrial economy. Capital inflows into Palestine have been paltry in comparison, enabling little more than the bare survival of a population whose productive infrastructure has been carefully and purposely dismantled to keep it in a state of dependency.

The illusory nature of the mirroring process goes a long way toward explaining the failure of Rawabi, which is at once a “settlement” in its presuppositions and cost, and emphatically not one in terms of the identity of its prospective residents. The project was contradictory from the very beginning, yet this does not seem to have seriously deterred either its boosters or its funders. 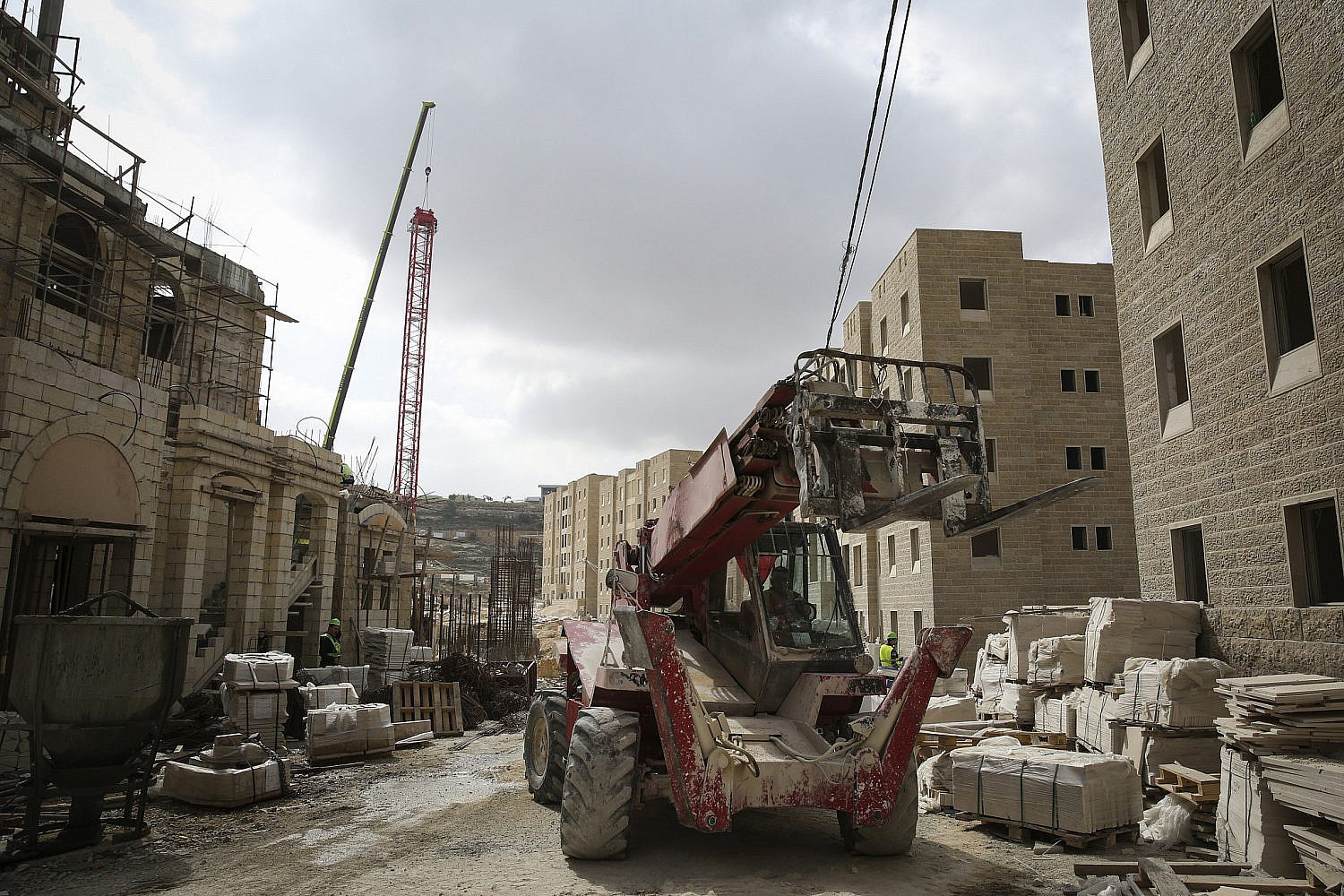 View of the construction site of the new Palestinian city of Rawabi, Feb. 23, 2014. (Hadas Parush/Flash90)

The predictability of failure and the happy obliviousness of all involved are reminiscent of another utopian urban development in the Middle East: Masdar City in the United Arab Emirates. Described in another fine ethnography, Gökçe Günel’s “Spaceship in the Desert,” Masdar was an ambitious attempt by one of the world’s foremost petro-states to create an ecologically exemplary “zero-carbon” city, which at the time of the book’s publication in 2019, seemed to be degenerating into “a ruin that operates as an amusement park.”

Rawabi’s fate may not be very different from Masdar’s; but as I suggested in a review of Günel’s book, such projects may be best described as speculative in both the ordinary and the financial sense. As political economist Aaron Benanav argues, the poverty in which the majority of the world’s population has been immured since the 1970s severely limits its capacity to purchase commodities, producing a long-term global stagnation in prospects for productive investment. Capital is thus made available for high-risk, experimental ventures, especially if they serve a political purpose conducive to the interests of the global ruling classes. If these projects do not turn a profit, then at least they shore up the political conditions for profit extraction, whether through the “greenwashing” of national economies heavily dependent on fossil fuels, or the pacification of colonized populations like the Palestinians.

By applying the analytic of settler colonialism without essentializing indigenous identity, and by theorizing the effects of global capitalism on Palestinian class formation, “Palestine is Throwing a Party” shows the way forward. Though there is nothing optimistic about its portrayal of relations between Palestinians and Israelis as a dark, distorting mirror, its reminder that the two groups are forever shaping one another against a backdrop of steep global inequalities will be crucial for any politics of democratic decolonization.

Matan Kaminer is an anthropologist, a postdocotoral Buber Fellow at the Hebrew University, and a member of the board of Academia for Equality.