A new video series about ‘design flaws’ tackles the question of why the world is so irked by Israel’s separation barrier. Surely it’s not the fact that it cages in millions of people and annexes roughly 10 percent of the West Bank. No, it’s just a matter of aesthetics.

The 90-second video opens with the young man walking bouncily along a dusty strip of road lined by a chain link fence as he explains that “the world is not crazy about our separation barrier.”

View the full-length Hebrew here; a shortened, subtitled section is below:

“Even though 94 percent of the barrier is actually a fence, and only six percent is a wall, the world calls it a wall. An apartheid wall,” he says. But why? The problem, according to the young man, is the wall’s appearance — which, he asserts, is “the principle reason behind the opposition” to the barrier.

The solution, he says with a wink, is “to fire the designer.” (“Fire the Designer” is the name of the new online video series examining design flaws in various areas of life, of which this video is the second episode.)

The problem, he explains, is that the concrete sections of the barrier run through urban areas, like Jerusalem, and the eight-meter high wall in Jerusalem reminds people of the Berlin Wall, which was “hated by the entire western world.” The Berlin Wall, he adds, was also decorated with graffiti — “just like ours.” So no wonder the world thinks our fence is “evil” and that it should also be dismantled.

“Forget politics!” says the young man, now sipping espresso in a cafe overlooking Jerusalem’s Old City. “The fact is that the government of Israel has stated that the purpose of the fence is to keep terrorists out.” Strolling over to the cafe windows that overlook the picturesque Ottoman-built walls surrounding the Old City, the young man says, with heavy irony, “If only we could find some appropriate local inspiration in another physical barrier that was built to protect the city against dangerous invaders.”

The camera pans over the 500 year-old wall of the Old City, built of golden Jerusalem stone.

The solution, narrates the young man, as he bounces along the tourist promenades outside the Old City, is to build an attractive wall — a wall that looks like the Great Wall of China rather than the Berlin Wall.

“It’s true,” he acknowledges,  that “altering the appearance of the wall would not change the reality for the people living on either side.” Nor would it quiet all the opposition to the fence.

“But in terms of hasbara,” he says with a wide smile, “It would help us a lot.”

A few of us at +972 Magazine were, like many others who shared the video on social media, confused. “Was it satire?” we wondered. Surely nobody would seriously make the argument that the problem with Israel’s separation barrier was not that it prevents freedom of movement for more than 2.5 million Palestinians, or its de facto annexation of roughly 10 percent of the West Bank, or that it symbolizes Israel’s abject failure in negotiating an end to the occupation. Is he really asserting that the problem with the barrier is that it’s an aesthetic eyesore?

So we asked Kann’s digital unit to clarify. Their response, sent via Facebook messenger (translated from Hebrew):

Kann is government owned, but it is not an Israeli version of RT. It is an independent broadcaster that makes its own content decisions, like public broadcasters in the UK, Australia or Canada. Kann’s news presenters and analysts are neither more nor less critical of Netanyahu and his government than the two commercial broadcasters. It seems that this strikingly inappropriate video, and the tone-deaf response to +972’s inquiry, are indicators that the national discourse has reached the point of eliminating the Palestinians completely from public awareness.

Over 15 years have passed since construction on the barrier began, and we are now a decade into Netanyahu’s authoritarian discourse of total rejection for both a two-state solution and of the humanity of the Palestinian people. This discourse has filtered into Israeli society so that it is now quite mainstream, affecting even those who do not consider themselves Bibi supporters. Indeed, we often hear the opposition parties of Yesh Atid and Labor echoing Netanyahu’s rejectionist stance toward the Palestinians.

And here is the result: It is now, apparently, quite possible for a seemingly ordinary middle class Israeli millennial to say insouciantly, in a video about aesthetics, that a barrier, whether fence or wall,  which cages in 2.5 million people is a failure in design rather than a failure of policy or a violation of human rights. The Palestinians are not mentioned in the video — not even obliquely, except when the young man refers to “invaders” in the context of the Old City wall built by the Ottomans in the sixteenth century.

Israelis don’t really understand anymore why “the western world” seems to think that the occupation defines their country. The Palestinians seem to have become a vague, abstract entity that threatens to invade and therefore must be stopped with a wall — preferably an aesthetically attractive one. But they are not individuals who aspire to realize their human rights or desires. 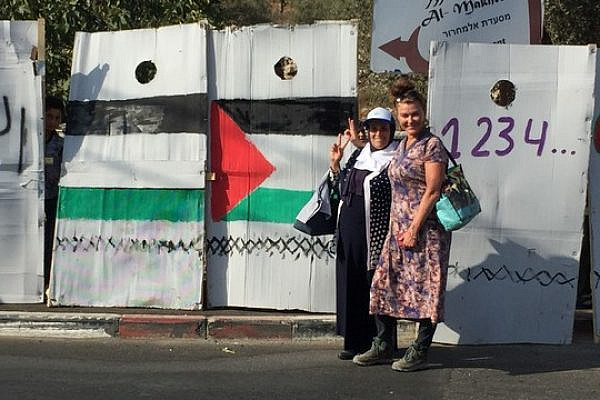 Hundreds of Palestinians, Israelis march to support village encircled by wall
Israel’s separation wall will surround the village on nearly all sides, which will separate its villagers from some 250 acres of agricultural land. Over 500 Palestinian and Israeli demonstrators marched Saturday to protest the construction of the separation wall and house demolitions in the West Bank village of Walaje, south of Jerusalem. The march started at the…
By Haggai Matar September 17, 2017