The first time I went to my current sublease in Bethlehem, I noticed something strange on the floor — the Star of David. When I moved into the place and looked closer at the pattern, I noticed a menorah. Here I was, in the heart of a Palestinian city, and the floor was “Jewish.” 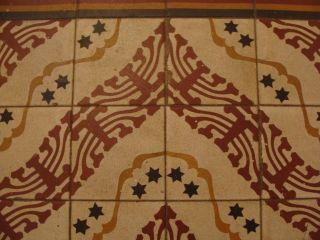 Hand-painted floor tiles in an old, pre-state home in Bethlehem. The design depicts the Star of David and a menorah. (Photo: Mya Guarnieri)

My apartment is in a home that is at least 100 years old. Hand-painted floor tiles were common in wealthy homes — Christian, Muslim, and Jewish — throughout pre-state Palestine. While I know that the land wasn’t always divided, the current context makes it hard to imagine a Palestinian family putting such tiles into their home.

But here the floor is and it gives me hope. It reminds me that the land has seen better years and that better years might be on the horizon. Not in a divided land, because we’ve already seen that division doesn’t work, but in a land where symbols of Judaism or Christianity or Islam might appear in one another’s homes.

Those who are opposed to a shared, democratic state sometimes cite security as a reason that Israel must remain a Jewish-majority state. But a one-state solution would privilege the security of every individual rather than that of an individual religious (and/or ethnic) group. And to those who argue that the separation barrier has lead to a drop in suicide bombings, I offer a basic from Statistics 101: correlation doesn’t equal causation. Further, the fact that tens of thousands of Palestinian workers come into Israel without permits everyday suggests that if a suicide bomber really wanted to get in, he or she could. (The fact that some people manage to come in without permits does not mitigate Israeli restrictions on Palestinian freedom of movement).

Some opponents of a one-state solution also say that the state’s character must remain Jewish for purposes of identity. But why?

If anything, having a Muslim partner has actually strengthened my understanding of and deepened my connection to Judaism. He is very curious about the religion and customs. Not only did he study up on Rosh Hashanah before he came to the holiday dinner, he had questions for me. Answering them helped me reflect on the occasion. And, his general questions about Judaism remind me that there’s no better way to understand a subject than to teach it. I’d like to think that my curiosity about Islam has also helped my partner reflect on his roots.

Then, with the clock ticking on my sublease, I go to look at an apartment to rent for the long term. It’s a lovely place, built in the early 1800s and it is high-ceilinged and full of light and air, and the elderly owner and I get on well. When she tells me that she and her family are refugees from Jaffa, from the Nakba, my stomach drops. And a feeling I can’t quite place — sadness, shame, guilt, anger, all of it? — settles on my chest.

When I leave, I call the current tenant to ask her a few questions not worth mentioning here. In the course of our conversation, she tells me that the most important thing to the landlord is to find the right tenant. She’s old, she wants peace and quiet; that’s more important than money, the tenant explains, adding that the landlord has recently turned away other people who looked at the place. Among the reasons, she suspected one of the men of being Jewish.

“No,” the tenant answers.

My question settles around my ears and I hear how stupid it sounds. Of course the landlord, who was made a refugee by the Jews, doesn’t rent to Jews. I can’t say I blame her. But, still, it hurts to hear.

I return to my sublease and the floor tiles look dull. Of course, I won’t abandon my long-standing belief in the one-state solution, including the Palestinian right of return. But, sometimes, it’s hard for me to imagine how it will all unfold.