Following the public refusal of 43 reservists of the IDF’s 8200 intelligence unit, politicians and other veterans of the unit have openly denounced the reservists, viewing their refusal as an unacceptable politicization of their army service.

Political leaders both from the government and the opposition condemned 43 reservists from Israel’s prestigious 8200 intelligence unit who stated their refusal to take part in intelligence-gathering activities that, they claim, deepen Israel’s military rule over Palestinians. Unlike the issue of refusal during Protective Edge, which was hardly noticed or covered during the war, the 8200 letter grabbed headlines over the weekend, appeared on most major news Internet sites, and was one of the lead stories in television news.

Prime Minister Netanyahu encouraged the unit to continue its important work for the security of Israeli citizens. Haaretz reports that Defense Minister Moshe (Boogie) Ya’alon called the letter “an attempt to harm the unit and its activities.” He said the move was a deplorable attempt to assist the “campaign of delegitimization” against Israel and the IDF.

Yariv Levin, the Likud chairman of the governing coalition, repeated a common accusation from the Right equating opposition to the occupation with support for terrorism. In a comment likely to elicit guffaws from Palestinians living under Israeli military rule, Levin, a veteran of unit 8200, told Maariv, “One who refuses to assist in guarding his country crosses the border between those who support Israeli democracy and the freedom it represents, to the terror-supporting Palestinian side, and attacks the innocent citizens of Israel.” 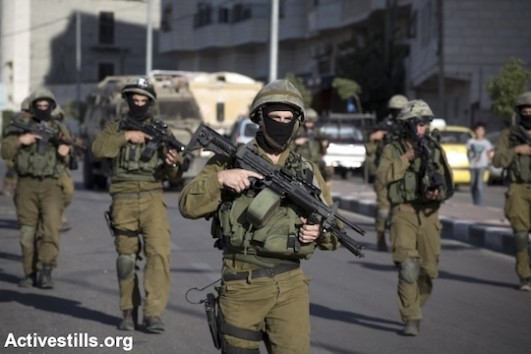 Israeli army soldiers take part in the search operation for three kidnapped Israeli teenagers, on June 17, 2014 in the West Bank town of Hebron. [File photo by Oren Ziv/Activestills.org)
However, the members of the opposition and people associated with the mainstream Left also clamored to decry the reservists’ refusal.

Both the current leader of the opposition Yitzhak (Bougie) Herzog, also a 8200 veteran, and the former head of the Labor Party Shelly Yachimovich condemned the letter at length.

Herzog stated that he opposes refusal, and said that the citizens of Israel would pay a price for such calls. But Yachimovich went further, lashing out first of all at the signatories themselves. On her Facebook page she essentially argued that they were arrogant for writing as if they are superior in Israeli society based on the prestige of the unit. Noting that they gain invaluable skills and enjoy shining career possibilities, they ought to be grateful rather than critical, she wrote.

Yachimovich did not seem to consider that the reservists might have felt a responsibility precisely because they are privileged, to consider those less fortunate; or that they may resent building their promising careers on what they view as the destruction of another society.

The reactions from Labor highlight a growing chasm between those who consider themselves left wing on social issues and because they support a two-state solution, and those whose “leftism” is expressed by urgency and action.

Thus friends who often take critical liberal and left-wing perspectives, wrote emotional posts on social media explaining their disapproval. Often the main accusation was that this refusal is “political.” Indeed, the response of both the IDF spokesperson and that of fellow reservists in 8200 who are opposed to refusal, quoted in Walla, was that that refusing duty is an unacceptable politicization of their army service. The Unit 8200 reservists against refusal stated:

Political refusal has no place in the army and in our unit specifically. From the moment we reserve soldiers are called to the flag, we put aside our political opinions and orientations and we come to serve the state.

Notwithstanding the real concern of mutiny or anarchy should an army act independently of political will, there is something quixotic about dismissing an act of refusal because it is political.

That’s what an act of refusal is, unless it is purely personal or religious. Refusal in this case is a statement of something that is already abundantly clear: The IDF’s role in this conflict is deeply political. Israelis are drafted into service as soldier-citizens, it is impossible to extricate politics from service, or draw a phantom boundary between them.

The soldiers sought no personal gain, no political points. If they were a party, they would have lost all their votes (this is probably what terrifies Labor and accounts for the over-protestations). If their identities become known, since little is truly secret in Israel, the glamorous economic, high-tech and – as seen clearly through this incident – high-flying political paths open to them might easily be closed.

Essentially, they stood only to lose from withdrawing from a system they believe is destroying both sides.

The exhortations to keep politics to the realm of demonstrations and public discourse smack of insincerity. For those who truly, genuinely want to end the 47-year military rule over millions of Palestinians, one thing is clear: Nothing so far has worked. In that context, demanding that activists limit their activities to those with no impact is merely embracing the occupation itself.

*Correction Appended: A quote has been removed because it was mistakenly cited from a personal Facebook page in which the setting was private.

Related:
IDF’s ‘start-up nation’ reservists refuse to serve the occupation
How can you tell that Israeli refuseniks are are scaring the system?
Israeli teens tell Netanyahu: We will not take part in occupation