What’s the importance of acknowledging the Nakba? Remembering it is the only way for both Jews and Palestinians to understand that this land is shared. It’s the only way of preventing the system from duplicating the same injustices over and over again. 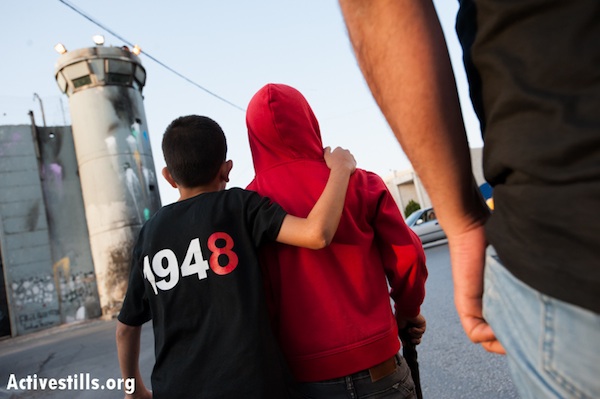 Palestinians march through the streets of Bethlehem to commemorate the Nakba, May 14, 2013. (Ryan Rodrick Beiler/Activestills.org)

A friend and I visited Ramallah last Saturday. It was a sunny afternoon; we took a friend’s car and hit the road so we could arrive in time for last minute preparations for the first screening of the Tunisian Documentary Film Month at Ramallah’s Khalil Sakakini Cultural Center. We are helping to organize the screenings as members of the Palestinema Group, an unregistered group of cinematographers, writers and cinephiles who work toward breaking down the Iron Wall between Palestinians in Israel and the Arab World. We work to better organize the Palestinian film industry inside Israel, and to improve connections between Palestinians inside Israel and those in the West Bank, Gaza and the diaspora.

The film was Degage, a first-hand Tunisian documentary of the country’s revolution. We were fully aware of the meaning of the date we chose for the festival. Launching screenings in the historical Palestinian cities of Jaffa, Haifa, Jerusalem and Ramallah in the month of May, Nakba month, is our way of expressing which regime we are demanding should fall. In effect, it is demanding our full rights – as one Palestinian people – both to live in the coastal cities as Palestinians, as equal citizens with equal access to political participation and urban planning, and to do so without either compromising our Palestinian identity or our cultural and natural connections with the Arab World. Somehow, altering the Arab Spring’s best-known slogan (“the people demand the fall of the regime”) to “the people demand that the Nakba end,” represents a wish that our spring too will come.

We had already held screenings in Jaffa on Friday afternoon and in Haifa the same evening, and we were eager for our first-ever collaboration with such a respected cultural center in Ramallah. We were thrilled that immediately after publishing the program we were invited to bring the Film Month to Gaza. We can’t actually visit Gaza, but the thought of screening the films there brought out a childlike excitement. Just knowing that we could have brightened some peoples’ day there would have been priceless.

But we still fight and live in a very divided, sliced-up and segregated country and communities within it. This is the direct result of whoever – in Europe and the U.S. in the late 19th and early 20th century – thought it was logical to divide a land. A land, which back then was a normal extension of its Arab surroundings divided into two units, one Arab and the second Jewish.

The ironic tragedy is that this mindset of creating a “Jewish entity” on a land that was predominantly Arab didn’t seem to bother any of the European minds creating the project’s master plan 100 years ago. It didn’t even bother them that the plan inherently meant displacing hundreds of thousands of locals, or subjecting them to eternal foreign control. Because back in the beginning of the 20th century, population transfer was “conflict resolution,” and foreign control was common.

The sad and not-so ironic part is that today, this same idea of separation and denying Palestinian rights in the coastal area is perpetuated in current peace talks, which turn the unbelievable situation created by the atrocities of 1948 into permanent facts. For Palestinians like me, who were teenagers in the 1990s, the Oslo peace process was about ending military rule over the West Bank and Gaza and a healing reconciliation process containing some transitional justice to redeem this conflicted land. It was about acknowledging the simple fact that there were people on the land that Israel claimed for so many years was “a land without a people for a people with a land.” But on the contrary, the peace process, as designed by Israel, is actually a direct continuation of the same old mentality. Through peace, the Israeli establishment just wants to achieve what the first Intifada prevented it from obtaining through war: when the Palestinian revolt threatened Israeli control, peace talks were supposed to help, but Israel gave no recognition and the settlement free-for-all continued.

Approaching the West Bank, driving with my friend who herself is a descendent of an internal displaced refugee family from the village of Ma’lul near Nazareth, we couldn’t help but notice the never-ending one-sided change in the landscape. Israel is building everywhere. Checkpoints move further and further into the West Bank, restricting the areas in which Palestinians can move through with relative freedom and pushing them into smaller and smaller ghettos. In addition to all that, we couldn’t get over the similarity between two Israeli policies: first, using the curtain of the peace process in order to prevent West Bank Palestinians from moving inside Israel through the creation of the permit system, in addition to pushing millions of Jewish immigrants into Israel and diverting many of them into the settlement creations; and second, between 1948 until the mid 1950s, when refugees were prevented from returning, were shot at when they tried to cross the borders and prevented from cultivating their lands. At the same time, the young Israeli state doubled its numbers by bringing more than half a million new immigrants and doubling the number of settlements, all while an Israeli regime of martial law imposed restrictions on the movement of our parents.

Same same, a copy-paste system. What was implemented back then is still being implemented now, not to mention the continued use of shared public space exclusively for settling Jews inside Israel.

That’s the main reason why it is important to acknowledge the Nakba: remembering it is the only way for both Jews and Palestinians to understand that this land is shared. It’s the only way to prevent the system from duplicating the same injustices over and over again. As long as the so called “left wing” in Israel sticks to the righteousness of “redeeming the land” and doesn’t acknowledge the basic injustice of 1948, it is only legitimizing a colonial project, and more and more directly legitimizes the same settlement of the land – both in the West Bank and inside Israel.

Repeating the mantra of a “Jewish homeland” will only keep this land hostage to world Jewry, without giving its residents the ability to enjoy it.

Read more:
PHOTOS: Palestinians commemorate Nakba Day with rallies and protests
The Nakba: Addressing Israeli arrogance
The Palestinian Nakba: Are Israelis starting to get it?
Despite efforts to erase it, the Nakba’s memory is more present than ever in Israel
Report: Forced displacement on both sides of the Green Line

Muhammad Jabali is a Palestinian Israeli activist and facilitator. He is a coordinator for the Ayam Association’s Jaffa Project-Autobiography of a City, which works to reconcile memory and space for a cosmopolitan Jaffa. He writes for Palestinian media and blogs within Israel, and has published poems in both Hebrew and Arabic. He is also a part of the Palestinema Group, which promotes films from the Arab world inside Israel-Palestine. He is also an occasional DJ. Visit his personal website here.