Up until now, very few details have been released about how many people and how much land will be affected by the Prawer Plan. 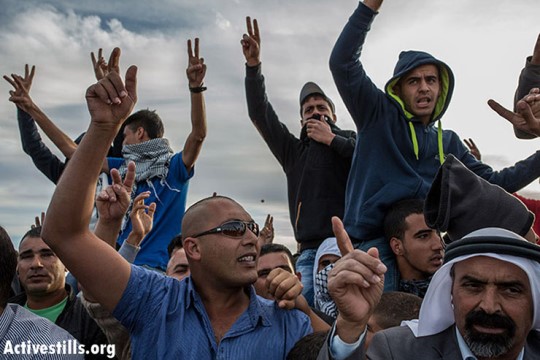 Bedouins and other activists shout slogans during a protest against the Israeli government’s Prawer Plan, on Road 31 near Hura, Israel, on November 30, 2013.

Knesset Internal Affairs Committee chairperson MK Miri Regev revealed details of a secret document prepared in the Prime Minister’s Office about the implementation of the Prawer Plan for the resettlement of the Negev Bedouins, Yedioth Ahronoth reported this weekend.

The Prawer Plan, named after retired general Uri Prawer who drafted its initial outline for the Prime Minister’s Office, intends to solve the issue of unrecognized Bedouin villages in Israel’s south.

Israel never recognized its Bedouin citizens’ land claims or ownership rights. In the years following the 1948 war, The Bedouin were expelled from the western part of the Negev (Israel’s southern desert); later, most of the population was transferred to seven townships that Israel planned and built for them. The remaining Bedouin villages were deprived of infrastructure such as schools, running water and electricity. Almost 100,000 people live such unrecognized villages today.

According to the Prawer Plan, some existing Bedouin land claims and villages will be recognized, but many others rejected and their populations removed. Most of the Bedouin community rejects the plan, and demonstrations against it have been held frequently in recent months. So far, the government has refrained from telling Bedouin which areas will be evacuated and where will they be allowed to resettle.

The document revealed by MK Regev was prepared by the Prime Minister’s Office for Housing Minister Uri Ariel of the Jewish Home party in order to get his party to support the plan. According to the agreement between Prime Minister Netanyahu and the Jewish Home, the voluntary implementation phase of the plan will be limited to three years, a period after which forced evacuations should take place.

Meanwhile, criticism of the plan on the Israeli Right and among settlers is also gaining momentum. On Friday, Israeli daily Ma’ariv claimed that ministers Naftali Bennett and Avigdor Liberman agreed to prevent the Prawer Plan from passing the second and third rounds of voting in the Knesset, claiming that the Bedouin “lost” their rights to the benefits included in the plans due to recent protests against it.

Related:
The historical truth about Bedouin expulsion from the Negev
Prawer Plan: How the natives became invaders in their own homes