The report – which specifies at least six violations of the UN convention on children’s rights –  spotlights the horrors Israelis have grown accustomed to. 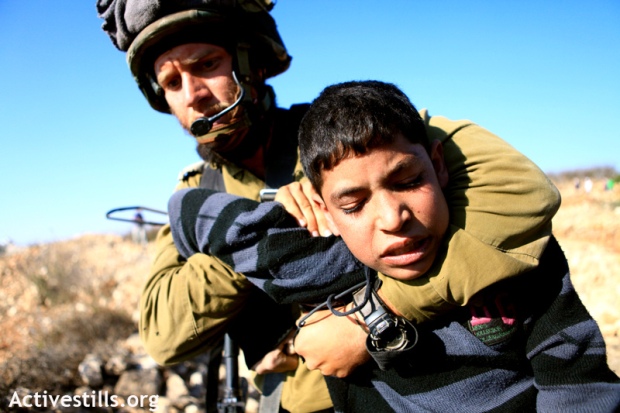 A report by a group of distinguished British jurists, published on Tuesday, reached the conclusion that Israel violates the Convention of the Rights of the Child (UNCRC), of which it is a signatory, by its behavior in the Occupied Territories, and that in a few cases it is also in violation of the Fourth Geneva Convention. The report was made at the behest of the British Foreign Ministry, whose officials said they intend to “challenge Israel” over its policy regarding the detention of Palestinian children.

The report itself is measured and careful, and in and of itself, contains little that is new to anyone familiar, for instance, with B’Tselem’s report on the issue. It reports what every Israeli must know and what many Palestinians have experienced: the invasion of a home at night; the dragging of a child out of his bed; handcuffing and blindfolding him, even though he is no threat to the armed-to-the-hilt gunmen who detain him; dragging him away into a far interrogation facility, without the presence of a relative; a hostile interrogation, often including threats of violence and sometimes actual violence; the demand to incriminate others; the prevention of contact with a relative or a lawyer; the long detention, months turning into years, without a trial; and that trial’s foregone conclusion, known well in advance.

All of which is well known. So well known, our hearts have grown callous. How many Israeli adults did not see Palestinian children sitting on the ground, hands cuffed behind their backs, their eyes blindfolded with gun cloth? Those who dwell in darkness grow used to it. And then a group of British jurists comes along, turning a searchlight at them, and show them how far they are from the civilized norm. In a few cold sentences they remove the thin film of “the only democratic country in the Middle East,” leaving you just with a “country in the Middle East.”

The jurists have found that within Israel proper, it actually observes the UNCRC; the problem is what happens in the Occupied Territories. They state loud and clear that “Israel should not discriminate between those children over whom it exercises penal jurisdiction. Military law and public administration should deal with Palestinian children on an equal footing with Israeli children.”

States Parties shall respect and ensure the rights set forth in the present Convention to each child within their jurisdiction without discrimination of any kind, irrespective of the child’s or his or her parent’s or legal guardian’s race, colour, sex, language, religion, political or other opinion, national, ethnic or social origin, property, disability, birth or other status. (My emphasis.)

It’s not a complicated text and it’s not a complicated demand, yet Israel fails to meet it time after time. The report finds (articles 110-111) that Israel is in violation of the aforementioned article 2; of article 3 (protecting the interests of the child (“In all actions concerning children… the best interests of the child shall be a primary consideration”); of article 37(b), which prohibits using detention as the first measure against a child (“No child shall be deprived of his or her liberty unlawfully or arbitrarily. The arrest, detention or imprisonment of a child shall be in conformity with the law and shall be used only as a measure of last resort and for the shortest appropriate period of time“- my emphasis); of article 37(c), which prohibits the jailing of children together with adults; of article 37(d), which requires speedy access to a lawyer (and one might also quote the demand for a ” prompt decision on any such action”); and article 40, which the jurists interpret as prohibiting the handcuffing of a child – and this handcuffing, so routine we barely notice it anymore, drew plenty of angry attention abroad.

The report further found that the common practice of moving detained children from the Occupied Territories to Israel is a violation of the Fourth Geneva Convention; it also noted that such transfer largely prohibits meetings between the detainees and their parents, who often do not have a permit to enter Israel – Kafkaesquely, sometimes because their children were detained.

In the discussions of the British jurists with Israeli colleagues, the latter promised to sometime improve the treatment of minor detainees, however with the condition that “there being no significant unrest or ‘third intifada'”; the jurists coldly write (114) that “A major cause of future unrest may well be the resentment of continuing injustice. We hope that the Israeli Government will recognise this, and will recognise too that justice is not a negotiable commodity but a fundamental human right which can itself do much to defuse anger.”

Possibly the most disturbing article in the report is article 115: “It may be that much of the reluctance to treat Palestinian children in conformity  with international norms stems from a belief, which was advanced to us by a military prosecutor, that every Palestinian child is a “potential terrorist”. Such a stance seems to us to be the starting point of a spiral of injustice, and one which only Israel, as the Occupying Power in the West Bank, can reverse.”

So, at least one military prosecutor accepted the basic position of the notorious gentile-slaying manual “Torat Ha’Melekh”: that every Palestinian child is a potential terrorist, and as such the rules relating to “normal” children do not apply to them. The fact that he was dumb enough to say this to a British fact-finding committee is mind-boggling, and I wonder whether he fully understood what he said – or, having lived for years among average Israelis, his moral sense has long ago dulled. One devoutly hopes this criminal remark should provide plenty of work for our Hasbara experts.

The response of the Israeli embassy in London is noteworthy, due to its breathtaking chutzpah: it claims that as long as the Palestinian Authority does not detain children allegedly involved in violence (of course, they drop the “allegedly”‘; they consider Palestinian children to be guilty as soon as they are detained), Israel has no recourse but to detain them itself. The embassy hopes you won’t notice that the detentions mostly take place in Areas B and C, where the PA does not have the authority to carry out arrests.

Israel detains some 500 to 700 Palestinian children every year, i.e. at least one every day, on average. These detentions are carried out with the support – tacit or active – of a vast majority of Israelis. One day they’ll have to explain this.

Related:
In the West Bank, there is no justice, even for children
Activists stage street action to protest Israeli torture practices