facebook twitter email link
In what appears to be an escalation in the Israeli army’s attempts to intimidate unarmed protesters from joining protests in Nabi Saleh, soldiers apprehended a Palestinian-American college student this morning at the entrance to Nabi Saleh as the weekly demonstration against the occupation was starting.

The demonstrator, who wishes to remain anonymous, told +972 that he was on his way into the village in a private taxi from Ramallah. At the entrance to the village, Israeli soldiers prevented him from entering and searched him and his driver mutiple times. After the searches were complete, soldiers took his phone, passport and wallet while leaving him and his driver to sit in the sun.

After one hour, soldiers informed him that he must return to Ramallah and demanded that he “tell people not to come to Nabi Saleh because it is closed.” One military jeep then followed his taxi as it drove back to Ramallah.

Using the Twitter handle @Abou_Charlie, he reported his experience with the soldiers only to realize that soldiers had used his phone to tweet while he was detained. He told +972 that the Twitter application was also logged out when the phone was given back to him after being detained.

His twitter feed shows 6 tweets he says Israeli soldiers tweeted from his account while they detained him, in which they tell his followers he was stopped for rock throwing, to “go home,” and that Nabi Saleh is closed: 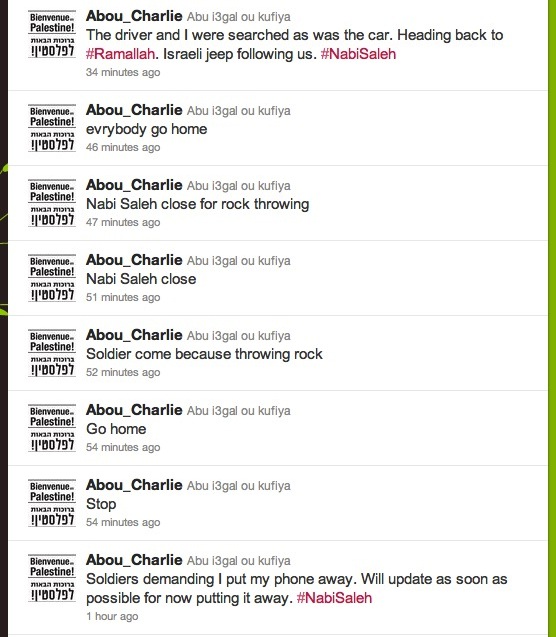 Several minutes later, @Abou_Charlie realizes tweets were sent earlier on his account by the soldiers who had his phone:

Shir Harel contributed to this report from Tel Aviv