With the media turning all its attention to Gaza, two important conclusions can be drawn about the role of social media, and censorship by Hamas and Israel during times of war.

1. How social media broke the siege

Regardless of whether the Israeli operations of 2008, 2012 and 2014 may feel the same for residents of Gaza, anyone following the news, and specifically social media, can see the profound differences. Perhaps it is because social media activists were more active in 2012 than in 2008. During this last assault on Gaza, however, we saw social media play a major role in spreading the news from Gaza to the rest of the world.

I am no exception. As a journalist who must go out into the field for her reporting, I am always either taking and publishing photos of every place I go, or posting the latest news that I hear from friends or local radio stations. No matter what, these days I give priority to social media, as it has begun to eclipse mainstream media outlets.

My sister, Fatin, who speaks Hebrew well, never thought of using Twitter before I pushed her to. Gradually she began tweeting in Hebrew, but was followed only by users in Israel. She gave up fairly quickly after being attacked by Israelis for her updates. 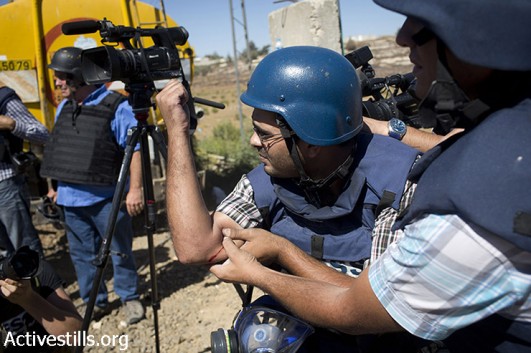 A member of the media holds his arm after being injured from a live bullet while covering Palestinian clashes with the Israeli army following a protest supporting Hamas against the Israeli attack on Gaza, on July 25, 2014, in the DCO checkpoint near Ramallah, West Bank.

I cannot deny that comments from Israelis who are misled about what happens in Gaza stress me out, especially when they attack me for doing nothing more than providing news updates. Enduring this part of the conflict is no different from enduring non-stop violence for nearly a month.

Social media has given people outside of Gaza the opportunity to place themselves in the shoes of those posting their own experiences and stories – those same people who are uploading photos of their demolished homes or describing how their loved ones were killed. This made it much easier on people who have wanted to follow what was taking place on the ground. On the other hand, it put pressure on Israel and Hamas, as nearly everything that occurred was documented by social media activists.

2. On censorship and human shields

With the large number of foreign journalists coming in and out of Gaza, claims of Hamas oppression against members of the press – including death threats – should they not report according to the directives of the organization have emerged. As a local journalist covering the Israeli offensive on Gaza, it is my duty to shed light on reality, which doesn’t necessarily mean defending Hamas.

Before the war, the Hamas government had put more restrictions on journalists entering Gaza for work. However, after the beginning of Israel’s Operation Protective Edge, it eased the passage for many of them. I have seen the work of foreign journalists whose entry into the Strip was facilitated by the Hamas government; they had access to different sites and were able to cover many aspects of the war without any government interference – this was also due to the fact that many Hamas members were forced into hiding during the military assault.

The main obstacle for the journalists was the closure of government offices, including the press office, in the wake of the Israeli offensive. Visas to Gaza were even canceled due to the large number of foreign journalists entering the Strip, and no statements were issued by the Gaza Media Office regarding what could or could not be reported. 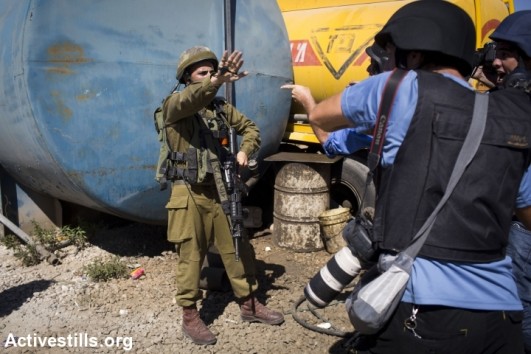 An Israeli soldiers arguing with media staff after soldiers shot a journalist with a live bullet during clashes of Palestinian supporters of Hamas with Israeli army forces, following a protest against the Israeli attack on Gaza at the DCO checkpoint near Ramallah, West Bank, July 25, 2014 (photo: Activestills)

Local press informed the foreign journalists that tweeting about the locations of rocket launches was a sensitive topic, despite the fact that the government never forbade them from doing so. I didn’t find evidence of militants threatening foreign press, purely because militants were never even seen walking around.

There is a larger context vis-à-vis censorship and legitimacy. Every state has the right to restrict its press due to security concerns – this is a widely known fact. Israel is the first to censor journalists, both foreign and local. So why is it that they understand security concerns in other countries, but not in Gaza?

This is similar to the double standard regarding civilian targets. How is it that homes, schools and mosques in Gaza are fair game for the Israeli military, while Israel keeps its military bases in the heart of its large cities?

Related:
Propoganda wars: Searching for a narrative in Operation Protective Edge
There is no war of images, only occupation
Israel’s social media campaign: The first war lost on Twitter?