The Shin Bet interrogated them, the judges were sympathetic. Their selection as representatives of Palestine, however, sparked a political controversy. Will Manal Moussa or Haitham Khalailah, both Palestinians from within Israel’s borders, manage to repeat Mohammed Assaf’s achievement and win the Arab Idol contest?

By Yael Marom (translated from Hebrew by Shoshana London-Sapir)

One year after Gazan Mohammed Assaf won Arab Idol, the Palestinians have two new and promising contestants in the pan-Arab competition in Beirut. Manal Moussa, 25, from Deir al-Asad and Haitham Khalailah, 24, from the neighboring village of Majd al-Krum were chosen to represent Palestine in the contest, one of the most widely watched programs in the Middle East.

But for Manal and Haitham it is not only a personal opportunity, they are also navigating a complex political reality: the Shin Bet, Israeli legal restrictions on the travel of Palestinian citizens, the complicated relationship between Palestinian citizens of Israel and the Arab world, and a huge sack of political expectations placed on their shoulders. 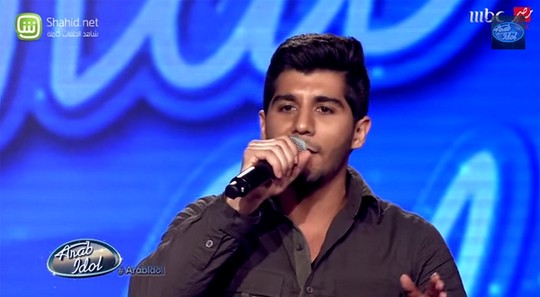 Hundreds of millions of viewers watch the contest, broadcast for the third year on the Saudi MBC network, uniting the whole Arab world around it. Most of them are young people, of course. The contestants are judged for their musical abilities, performance and charisma, but regional politics also plays a role.

The last program before the live performance stage of the contest aired last Saturday night, and 26 (9 women and 17 men) out of 52 contestants were selected to move on to the next round. The two Palestinian representatives from northern Israel made the cut. The contest also included three brothers, the children of Palestinian refugees living in Jeddah, Saudi Arabia. One of the brothers also moved up to the live performance round.

Traveling to Lebanon through the PA

This year’s contestants also included male and female singers from Iraq and Syria who sang in Kurdish, Assyrians and Turkmen. The last selection stage included a contestant from Japan (a student of Arabic and oud player) and two devout Muslim women from Egypt and Algeria who appeared with their heads covered. To reach the live performance stage, contestants had to defeat tens of thousands of others who were tested in preliminary auditions all over the world. Auditions were also held in Morocco, Algeria, Lebanon, Bahrain, UAE, Berlin, Paris, and for the first time in the history of Arab television reality shows of this type, in Ramallah.

Manal and Haitham were selected in the first stage in Ramallah and chosen to represent Palestine from among dozens of candidates. But after passing the first stages, a problem came up: the pair had to travel to Beirut, where the remainder of the contest is filmed before a live audience.

However, for an Israeli and Lebanese passport holder to even meet is against the law – in both Israel and Lebanon. In order to go to Lebanon for the first part of the contest, the two received a special laissez-passer from the Palestinian Authority. When they returned to Israel, however, they were interrogated by the Shin Bet and their passports were confiscated. Despite their success on the program, their chances of staying in the contest looked bleak and uncertain.

Haitham and Manal introduced themselves as Palestinians in the show. Nevertheless, Hebrew media like Ynet, in an article about them from early May, declared: “History: Two Israeli singers in Arab Idol.”

A Palestinian friend from central Israel, an avid viewer of the program, explained to me:

When Haitham passed one of the auditions he dedicated his victory to Palestine. They are reminding the world that ‘48 is Palestine. [“’48” is used to refer to the area of historical Palestine that became Israel in 1948. It is also a term used to refer to Palestinians who live in Israel and are hold Israeli citizenship — y.m.] Especially the Arab world, which has forgotten about the occupation, Gaza and what is going on here.

There is a certain similarity between Gaza and what is happening here in ‘48. There is a huge barrier surrounding Gaza in the form of a siege and occupation. Anyone leaving Gaza needs Israeli and Egyptian permits. The barriers are also psychological barriers of isolation from the world, cultural and social separation and a lack of belonging. Here too. Mohammed Assaf’s victory gave hope to other young people that you can break the wall or the barriers and separation.

A photograph sent to Manal Moussa by fans in Gaza is posted on her Facebook page. The poster says: “From Gaza, Manal Moussa’s fans thank our brothers in Deir al-Assad for their efforts to stand with us.”

Last April Palestinian Majd Kayyal, a journalist from Haifa, was detained and interrogated by the Shin Bet after returning Lebanese journalism conference Beirut. He told Rami Younis at the time, in an interview with +972: “As far as the Israeli establishment is concerned, all contact between ‘48 Palestinians and the Arab world is criminal and a danger to national security. Their goal is to intimidate and try to cut us off from the Arab sphere in which we live; they really do not want us to be in contact with our brothers abroad.”

The discovery of Kara’s involvement drew criticism by Palestinian activists and media who called on the two to come back, not participate in the contest and not represent the Palestinians at any price. The feeling was that Kara was trying to take advantage of Manal and Haitham’s popularity to increase his own appeal to the younger generation. Ayoob Kara is perceived as someone who shows absolute loyalty to Israel and the Likud and frequently criticizes young Palestinian activists in Israel for their support of Gaza and the occupied territories. Therefore, just agreeing to take his help was perceived as collaboration with the occupation – a heavy price to pay for appearing in a television contest.

In reality, however, the public criticism began the moment the program went on the air and even before Kara’s involvement came to light. Questions like how far one had to go in order to participate in such a contest came up for discussion. Influential Lebanese cultural journalist Nidal al-Ahmadiya, pointing to the pair’s Israeli citizenship, challenged the legitimacy of Haitham and Manal’s participation. She asked how two Israelis could be selected to participate in the program. In the mainstream and social media, the debate continues about whether people with Israeli citizenship should be allowed to participate in the contest as representatives of the Palestinian people.

There was a complete disconnect – and ignorance — until recent years in the Arab world, about who the Palestinians living in ’48 are; about the significance of our status within Israel. They viewed us as collaborators with Israel and some even thought we were Jews. Very few intellectuals, poets, writers and singers managed to break through that barrier and disconnect. Those who succeeded paid, and continue to pay a price. One example is Mahmoud Darwish, who was forced to leave Israel and live in exile for years, and some singers who pay the price of Shin Bet interrogations and persecution every time they travel to cultural events in Arab countries.

Mohammed Assaf’s win paved the way for other Palestinian talent to try to realize their dreams and break through the cultural barriers. For the Palestinians here it brought home the fact that we have very strong cultural ties with the Arab world and that is our natural milieu in terms of culture and language. At the same time, it brings up the question of what political price must to be paid. What is the limit of cooperation with the Zionist establishment in order to realize such goals, which are both personal and national, and how should the Palestinians of ‘48 behave?

In the footsteps of Mohammad Assaf?

Like in every musical reality show, the judges, too, have an important role to play. The Arab Idol panel of judges this year is headed by Ahlam. She is a famous singer from the Gulf who calls herself “al-Malika,” the queen. Ahlam is the strong, straight-forward character, the one who speaks her mind no matter what. Next to her sits Egyptian musical producer Hassan a-Shafii, in the role of the tough but fair judge who knows his music. The younger generation is represented by popular Lebanese singer Nancy Ajram, who is held in high regard by viewers, and famous Lebanese singer Wael Kafouri, who maintains the image of someone who does not cooperate with the media. The judges play their traditional roles: they fight among themselves, argue, and let their egos clash in front of the cameras and millions of viewers throughout the world.

On Saturday night Haitham Khalailah received praise from the judges for his performance. They all agreed about his talent and advanced him to the next stage without reservations. Manal Moussa is in a slightly more delicate position. She started the auditions with a storm but in the last show the judges expressed disappointment with her performance. Nevertheless, they decided to give her another chance and advanced her to the next round.

In the case of Mohammed Assaf, the tremendous support he received from Palestinians enabled him to win the contest. Currently, Manal and Haitham are continuing to gain followers in the Arab world. The ’48 Palestinian press is following, too, and providing ongoing coverage of their progress. Criticism of the two, however, which is coming mainly from the occupied territories, but also from Palestinians in Israel and around the world, might impede their success in the competition. But if the storm calms and they receive support at home, there is a chance that the Palestinians may have another winner in the contest this year.