An Israeli government plan to forcibly transfer thousands of Bedouin residents out of the Negev village of Al-Zarnug is being met with fierce criticism. 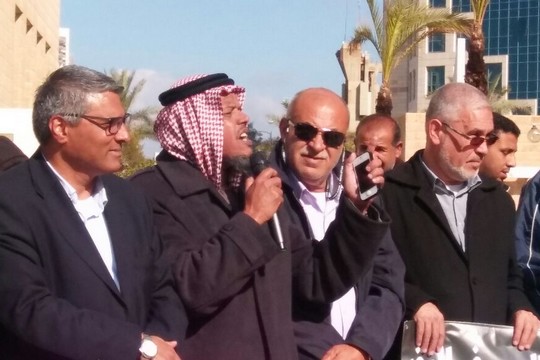 Around 200 residents of the unrecognized Bedouin village of Al-Zarnug demonstrated in the southern city of Be’er Sheva on Sunday morning in protest at a government plan to forcibly transfer them and the rest of their community to the city of Rahat. The protest, which took place as a local planning committee was meeting to discuss the plan, also included residents of Rahat and members of other Bedouin communities in the Negev.

To everyone’s amazement, the committee declined to make public its decision following the end of the meeting. Activists were told that the committee would mail out information to everyone who had submitted their objection to the relocation plan. Protest organizers said they feared that the decision would in all likelihood lead to an escalation in their battle.

Jaber Abu Queder, who represents the majority of the Al-Zarnug’s residents refusing to be displaced from their community, explained on Sunday why they are protesting: “It is illogical and pointless to transfer thousands of families from Al-Zarnug to Rahat. Asking families to turn their lives upside down in one day, when they have been accustomed to a communal and agricultural lifestyle since before the founding of the state, is certain to damage the fabric of social and economic life.

“We demand the recognition of our village, in line with the plans we have proposed,” Abu Queder continued. “The village consists of normative, law-abiding families. Demolitions in the village have increased recently, in order to compel us to leave. This relocation plan doesn’t suit our lifestyle, and no one asked or consulted with us about the move to Rahat — whose residents are also opposed to this plan.” 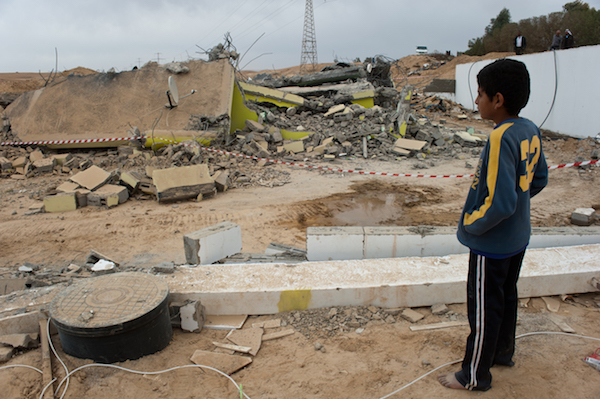 Demolition of a house in the unrecognized Bedouin village of Be’er al-Mshash, east of Be’er Sheva, December 29, 2010. (Jorge Novominsky/FLASH90)

The so-called “compound 11” plan has attracted fierce criticism. Residents of Al-Zarnug submitted, together with Israeli planning rights NGO Bimkom, a strongly-worded opposition to the plan. Al-Zarnug, they say, is the heart of a community that numbers around 3,000 members of the Abu Queder family. Village residents want to stay put and maintain their rural lifestyle in a community that has its own school and medical center, and Bimkom has prepared a plan for the village to be formally recognized by the state.

Also opposing the “compound 11” plan are the Regional Council of Unrecognized Villages, a political advocacy group, the mayor of Rahat and members of the Rahat council. The latter submitted their firm opposition to the transfer plan, citing a housing shortage in the city. The council claims that the Israeli government’s promise to add thousands of new housing units for Rahat’s residents has not been fulfilled, meaning that young couples are being forced to squeeze into their parent’s homes. An influx of thousands of people who are not Rahat residents would only compound the situation, the council says.

“I want to tell the Israeli establishment that we want to live in dignity and coexistence,” said Rahat Mayor Talal al-Qarinawi on Sunday. “[The principle of] coexistence cannot allow for people to be displaced from their homes. It’s time to recognize Bedouin villages and to stop the demolitions.

“Two people were killed in the Negev last week because someone made unacceptable decisions,” he continued. “Whoever thinks that thousands of people can be moved into Rahat without asking anyone about it is gravely mistaken.”

Joint List Knesset Member Taleb Abu Arar also spoke during the demonstration, telling protesters that “the government is going through a dark phase; the prime minister is under investigation for corruption and is therefore working to increase the number of demolitions, particularly in the Negev.

“[The government] has no solutions and is creating more and more problems. We saw what happened in Umm el-Hiran,” Arar said. “We are all against the evictions, home demolitions and all the other measures you are taking against us.

“We are standing strong against this policy. And you will be liable for its likely consequences.”

Daniel Beller is a journalist, blogger and radio broadcaster based in Be’er Sheva. This post was originally published in Hebrew on Local Call, where he is a blogger. Read it here. Translated by Natasha Roth.