A response to Dahlia Scheindlin’s piece about Mahmoud Abbas’ comments on ethnic cleansing in Jerusalem.

I am going to have to totally disagree with my colleague Dahlia Scheindlin on her piece, Response to Abbas: we’ll be together in Jerusalem forever. Although I am also ignorant of the speech Abu Mazen gave in Qatar, except for what I read in the papers, Abbas was saying that Israel is instituting a policy of ethnic cleansing in Jerusalem, which the Israeli media framed as an attempt to deny ANY Jewish connection to the holy city.

Dahlia’s contention is that Israelis and Palestinians are fighting on the same side in a war between moderates and extremists, and that no matter what happens we will be in Jerusalem together, forever and ever.

Despite being a comforting sentiment, it is simply not true. ‘Extremist’ and ‘moderate’ alike in Israeli politics have equally perpetrated the crimes of the occupation, and it is often the most leftist among Israelis who refuse to admit that what happened in the post 1948 Israel is in complete continuity with what is taking place in the ‘occupied territories’ today. Indeed, it was the Israeli secular moderates who governed Israel uninterrupted from 1948 until 1977.

It is foolhardy to say that despite efforts at ‘Judaization’ in Jerusalem, there will always be strong Muslim and Christian links to the city. What about the 500 plus villages and towns that were wiped off the map in what is now Israel, and whose memory has been pretty much erased from history? We don’t only want a historical legacy, we want a living memory. 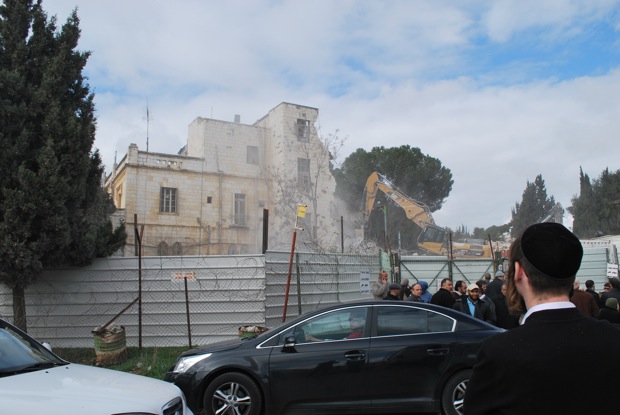 It is always best to show instead of tell, so I will give an example. A friend of mine, originally from Nazareth, related a story to me a few years back from when she was a college student in the United States studying archaeology. She went home for a summer and was working on a dig in Israel. Her name is one of those ambiguous ones that could superficially pass as Jewish and she said that everyone assumed she was. At one point she was in the office of the head of the dig, who was examining a beautiful piece of Ottoman glasswork that had been dug up the day before. He turned to her and said: “Do you see this? This is not history,” at which point he tossed it over his shoulder into a pile of rubbish.

Today, Palestinian artifacts sit in Israeli museums and private homes. Books taken during the 1948 war are in Israeli libraries, while we have a resurgence of the “there is no such thing as a Palestinian” in public Western discourse. This was something that leftists like Golda Meir, and not right-wingers like Ze’ev Jabotinsky, actively pushed.

Palestine and Palestinians came very close to being wiped off the map and out of history by a deliberate campaign, in which the historical legacy of Palestinians was seen as a threat to the emergence of Israeli and Jewish claims.

As much as it is unpleasant to recognize, the longer this conflict continues the erasure of history, of buildings, of people and of memory are steadily realized and supplanted.

We can say times have changed. That today’s moderates and extremists are different from the past. But this defies reality.
“Let’s cast off the notion of a conflict between Israelis and Palestinians already, which I sometimes feel is a brilliant decoy of the far right.” says my colleague.

What kind of wishful thinking this is? Go tell that to the Palestinians in Nabi Saleh, who have their homes raided in the middle of the night, and their young children taken out of bed to have their identities checked.

This is precisely the problem. There are those Israelis who want to dismiss what is happening as a fantasy, all while the bulldozers are rolling in the background.

Those Israelis don’t like that they are being fought on both sides, from Palestinians and from the right-wingers who are steadily gaining power. So, we Palestinians should stand back, or better yet, cheer you on while you go up against them and lose, all the while our land is confiscated and our history erased. I think its time those Israelis joined the Palestinian side, and not the other way around. Forget the self-aggrandized intellectual discourse that takes place in the cafes of Tel Aviv, and immerse yourself in the reality of what is being done in your name.