When Israeli military commanders call bereaved families from the field to confirm they’ve gunned down their child’s accused killer, security considerations are not at play — that’s just an army exacting revenge. 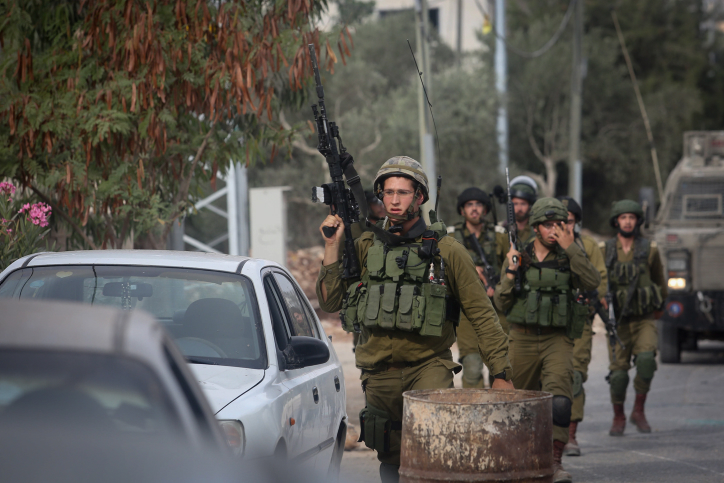 Israeli soldiers near the house of Baraa Ibrahim Sale after it was demolished by the Israeli army in the West Bank village of Deir Abu Mashal, near Ramallah, August 10, 2017. Baraa Ibrahim Sale carried out a terror attack with two other Palestinians, killing Border Police officer Hadas Malkam. (Flash90)

There is something almost spellbinding about the speed with which the Israeli government is tearing off the masks that once afforded its policies a veneer of decency. From the Jewish Nation-State Law to the cultural loyalty law to the law to legalize settlement outposts, from Prime Minister Netanyahu’s anti-Semitic friends to the blatant racism of his son who publicly yearns for a country cleansed of Palestinians — official Israel is not even pretending anymore. Everything is out in the open now.

This trend is also being reflected in the operations and policies of the Israeli army. Without any way of providing Israeli citizens with security and quiet in a reality of endless military occupation, it seems that the army’s main way of dealing with the Palestinians is sowing fear and collective punishment. This is done through demolishing homes belonging to family members of those who carry out violent attacks, a move that has been repeatedly deemed as ineffective by high-ranking officials in the army itself; through frequent raids of Palestinian cities supposedly under the full control of the Palestinian Authority, carrying out mass arrests that severely harm the PA’s image as an autonomous government; and by opening fire on unarmed protesters in Gaza.

Now the army has added another operational objective: exacting revenge on behalf of bereaved Israeli families. When Israeli security forces killed Ashraf Na’alowa, the Palestinian accused of murdering Kim Levengrond-Yehezkel and Ziv Hajbi at the Barkan Industrial Zone earlier this year, one of the first people to be notified was Rafi Levengrond, Kim’s father, who was briefed by the IDF Central command within five minutes of Na’alowa’s death. “It was important for me to inform you […] before it was published in the media,” Levengrond was told.

The family of Sgt. Ronen Lubarski, who was killed earlier this year during a raid on Al-Amari refugee camp, were also briefed as the family home of Islam Abu Hamid, the accused killer, was demolished over the weekend. “This morning, the commander called me from the field while the house was being destroyed,” Ronen’s father, Vladimir Lubarski, told Ynet. “It was important for him to speak to me first.”

Why was it so important for an IDF commander to call and update the father of the soldier — who was killed during a military operation — about the demolition of the home belonging to the family of the Palestinian allegedly responsible for his death? Was the killing of Sgt. Lubarski a criminal offense? Was the demolition of the Abu Hamid’s home a personal gesture to the Lubarski family in order to allay their pain?

It appears that Rafi Levongrond understood full well what underlies the operation that killed his daughter’s accused murderer. “I was waiting for this, but this is punishment after the deed,” he said after receiving the army’s update. “The issue is what to do to prevent this from happening. This is personal revenge but it won’t solve the problem. Of course, for our families, this is good news and we are very happy about it.”

By Monday morning, Levongrond’s tone shifted, after Israeli security forces only partially demolished Na’alowa’s family’s home in the West Bank village of Shweikeh. “I do not accept haphazard work,” he said. “They did not wound my daughter. They slaughtered and executed her… I demand they demolish the entire house.”

Although bereaved families have near-mythical status in Israel, their relationship with the state is far from simple. These relationships are often characterized by a demonstrative reverence that exacts severe criticism of those perceived as deviating from it, such as the storm that came down on lawmakers Miki Zohar and David Bitton, both from the ruling Likud party, who publicly confronted two bereaved families who lost their sons in the 2014 Gaza war. The same reverence that allows the Goldin family — whose son’s body is being held by Hamas along with that of fellow soldier Oron Shaul — to continue demanding that Israel abuse 2 million people in Gaza until their son’s body is returned.

But these bereaved families will only be revered so long as their demands fall in line with the government’s aggressive and belligerent agenda, and as long as they provide the army with the pretext and justification for revenge operations against Palestinians. The moment they stray from the militant line, they are stripped of their title as “bereaved families,” and turn into traitorous leftists. This, after all, is how the government treats the bereaved families of the Parents Circle Families Forum, which year after year has had to petition the High Court of Justice just to hold a joint Israeli-Palestinian Remembrance Day ceremony. Former Defense Minister Avigdor Liberman called the ceremony a “desecration” that “harms the bereaved families who are so dear to us.”

Orly Noy is an editor at Local Call, where a version of this article first appeared in Hebrew. Read it here.