The latest revision to the Prawer Plan, which will eventually displace tens of thousands of Arab Bedouin from their ancestral land in the Negev (Naqab), in some ways improves its tone toward the Bedouin. But the Arab Bedouin community has resolutely rejected the Prawer Plan, and Benny Begin’s latest report reminds us succinctly that the law was never intended to be a friend to the oppressed. 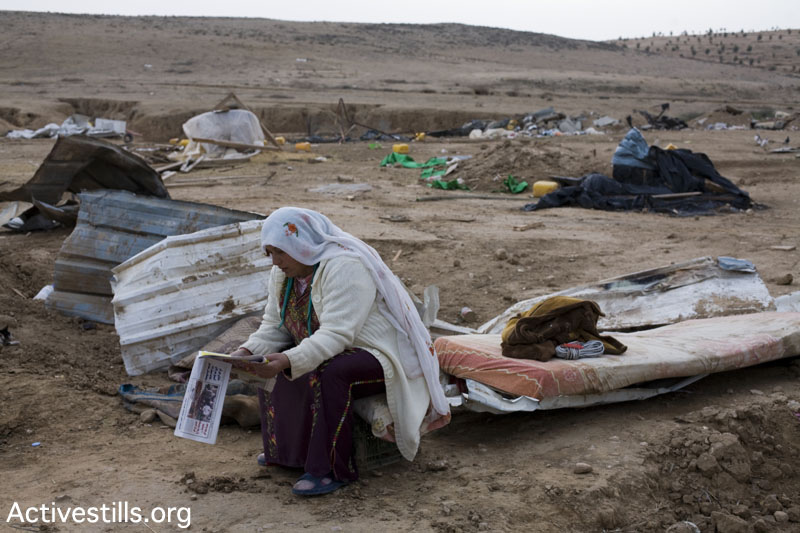 On the day after the Israeli elections, outgoing MK Benny Begin finished writing his recommended revisions to the Prawer Plan. The Minister without portfolio had been charged with responding to public grievances about the government-approved plan and its implementing legislation, which together aimed to displace tens of thousands of Arab Bedouin from their ancestral land in the Negev (Naqab). In the cabinet meeting on January 27, the Begin report was quickly approved and incorporated into the Prawer Plan, with the prime minister calling the decision “brave” and Minister Begin calling the revised plan “an expression of the Government’s goodwill and readiness to reach a solution.” But despite the pretense of generosity attached to the revisions, the amended Prawer Plan, which has been rejected by the Arab Bedouin community, retains both its discrimination and injustice.

Begin’s 13-page report (translated here in English) is the minister’s single response to the grievances of “over 1,000 Negev Bedouin, as well as their relevant groups and organizations” who participated in a three-month public consultation period in early 2012. The government called the consultations, which were held after the Prawer Plan and the draft Prawer Plan Law were already approved by the government, “unprecedented.” In the 10 months following the end of consultations, Minister Begin was able to craft a sophisticated response that demonstrated careful attention to language and tone. Gone are the explicit statements designating the Bedouin as squatters or legitimizing permission to evict them with “reasonable force.”

Thus the tone — if not the substance — of the Begin report is greatly improved, essentially by adopting key principles from the 2008 Goldberg Commission Report. Begin quotes Goldberg’s description of the Bedouin as citizens of the state and concedes, as did Goldberg, parts of Bedouin history. The Begin report acknowledges that after the establishment of the State of Israel some Arab Bedouin tribes were forcibly evicted into the Siyag (meaning “fence” in Arabic, the Siyag is an area of land in the northern Negev from which the Bedouin needed an exit permit until 1966) and that some had lived and held land in the Siyag for “many years” prior to 1948. Finally, Begin brings back the famous line of the Goldberg report:

…proposed is to recognize, as much as is possible, each one of the unrecognized villages which has a minimal mass of residents, such as will be determined…and on the condition that such recognition will not contravene the district master plan.

Of course, the Begin report does not mention the names of any of the villages that will be recognized, though neither did Goldberg or Prawer, ostensibly because “it is not possible to specify.” In reality, the condition “that such recognition not contravene the district master plan” drastically reduces how many of the 35 unrecognized villages could possibly be recognized. But for the first time Begin does tell Bedouin citizens of Israel the names of some of their villages that will be destroyed. 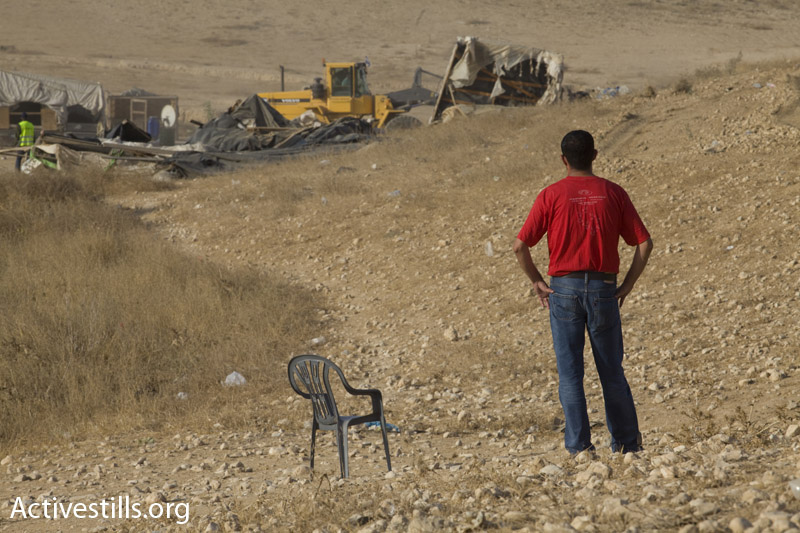 Using the unrecognized village of Wadi el-Na’am (and four other surrounding villages of the large Al-Azazme tribe) as an example, Begin notes that the villages’ 14,000 residents will be displaced without delay because of the danger emanating from the industrial plants of Ramat Hovav and Ramat Beka. Naturally, there is no mention that Wadi el-Na’am was created by Israeli military order in 1953 (during the concentration of the Bedouin into the Siyag) nor that the toxic Ramat Hovav plant was established long after in 1979, nor that in 2008 the state began developing a new city for military families in the same “shadow of danger.” Without specification, Begin mentions that in addition to Wadi el-Na’am, the Prawer Plan will also displace 3,000 other families (roughly 30,000 people), raising the government-acknowledged minimum number of displaced people from 30,000 to at least 44,000 people.

In one of the more condescending passages of the report, Begin notes that in the long run, forced displacement “can be a blessing” that will make it possible for Bedouin children to “leap in time into the midst of the twenty-first century.” Littered with Orientalist goodwill, Minister Begin wants (and knows) what’s best for the Bedouin community. With relatively minor changes, what’s ‘best’ is still the Prawer Plan. One such change is a slight augmentation in the amount of compensation available for an Arab Bedouin who is deemed eligible to claim ancestral land in the Negev. Begin recommends against capping compensation at 50 percent of the amount claimed, as was approved in the Prawer Plan, and instead to augment that cap to 62.5 percent. While the Bedouin still cannot receive their claimed ancestral land as compensation, Begin suggests that, when possible, the government should provide “comparable” land, as opposed to the generic “desert landscape” guaranteed in the Prawer Plan. But Begin affirms both the strict five-year timeline, after which any unresolved land claims will be automatically registered in the name of the state, as well as the severe restrictions on the process of judicial review for demolition and eviction orders.

The Arab Bedouin community has resolutely rejected the Prawer Plan, including the latest revisions, as the imposed plan denies the realization of their rights to their ancestral land and the recognition of their historic villages, while affirming the state policy of home demolitions and deliberate denial of basic services. The Prawer Plan neither acknowledges the traditional land system of the Arab Bedouin nor does it offer an equal opportunity for Bedouin citizens to determine their own future and choose a place of residence that suits their desires. Begin states simply that such historic justice is not possible.

In a series of paragraphs that is enough to inspire a young human rights lawyer to throw in her hat, Begin writes – after acknowledging that yes, the Bedouin were displaced to the Siyag, and yes, they lived and held the land in the Negev before the state was established – “Nonetheless, the legal framework, as an outcome of the Lands Law (5729-1969) and of other land laws, and as determined in case law, does not make it possible, as a rule, to accept the ownership claims of the Bedouins.” While admitting that laws could be changed to allow Bedouin claims to be recognized, Begin continues that “this kind of change is not justified and in any case, because we must propose a pragmatic solution to the dispute over the land, it must be assumed that this kind of change is not to be expected.”

Begin reminds us succinctly that the law was never intended to be a friend to the oppressed. The legislation for implementing the Prawer Plan is no exception. And once the draft law reaches Knesset, I have no doubt (even in a “centrist government”) that it will pass. Nor do I doubt that it will be challenged, but it will not be enough. The discriminatory plan must be cancelled now; no law should be allowed to deny justice.

Nadia Ben-Youssef is a human rights lawyer living in the Naqab and serving as an international advocacy consultant for Adalah – The Legal Center for Arab Minority Rights in Israel.