Far too many times Israel has mocked peace initiatives and adored violence. Altogether, it seems that the government is about to score major points in the propaganda war, only that each such victory is another step on the path to defeat.

As Israeli news outlets moved to live coverage mode over the weekend, I had a chance to speak with a friend who is involved in the politics of the mainstream Israeli left. He was enraged by the Palestinians, “who are again missing an opportunity.” At a time when Netanyahu is finally cornered, blamed for the failure of the peace talks, when we are moments away from public European intervention – so claims my friend – and when the coalition’s fractures are clearly visible — at such a moment, comes this terror attack that turns everyone against the Palestinians, takes the pressure of the government, and unites the public behind the prime minister. Next it will be discovered that Hamas is connected to the kidnapping and the West will reconsider its recognition of the Palestinian unity government.

I have heard these rants from other people as well, and many others on the Left simply preferred to stay silent over the past few days. The Israeli Left is clearly embarrassed by the more violent moments of the Palestinian struggle. Sometimes that embarrassment turns into anger about “the lack of a partner” on the other side, as if the Left is a PR person who discovers his client is a psychopath.

At times like this it is worth remembering that the Palestinians don’t work for the Israeli Left — or for the American peace camp, for that matter — and their national goal is not to score political points against Bibi or to improve the approval ratings of Meretz, Tzipi Livni or J Street. The sooner the Left stops analyzing the world through the lens of its own political interests, the better (this is also true for all those complaining that the Palestinians refuse to recognize Israel as a “Jewish State,” thus making it more difficult to sell the negotiations to a reluctant Israeli mainstream).

The Palestinians are conducting a national struggle for freedom, one which has heroic aspects to it but also despicable and intolerable ones like the latest kidnapping. Every such national liberation struggle in history has gone the same way, including our own.

In the past, Israeli society only listened to violence. The Madrid Conference and the Oslo Accord came after the First Intifada (though this was a largely unarmed struggle), and the Gaza Disengagement followed the Second Intifada. The same is true on other fronts as well. It took the 1973 War for Israel to sign a peace agreement with Egypt – before the war, Israeli governments refused far better offers than Anwar Sadat’s – and only the armed struggle by Hezbollah convinced Israelis to abandon their “Security Zone” in southern Lebanon.

Far too many times Israel has mocked peace initiatives and adored violence, both with its neighbors and among its own citizens. Netanyahu was way more serious in his talks with Hamas over cease fires and prisoner exchanges than he has ever been with Abbas. When Palestinian attacks on Israelis came to a complete halt, the government acted as if the status quo was just fine and that the world was finally coming to realize the occupation is a non-story. Now, when Jews are targeted again, they are asking why the international community is not more engaged. Altogether, it seems that Israel is about to score major points in the propaganda war, only that each such victory is another step on the path to defeat.

As an Israeli I find this kidnapping to be a revolting act. Those teens were targeted not because they were careless enough to hitchhike in the West Bank at night, as some comments today suggested, but because they were Israeli settlers in occupied land and there are those who believe that the only way to defeat Israel is through violence. There will always be such people. But if there is a chance to keep them as a small minority, Israel has done nothing to get there. I know Palestinians who hate and fear Hamas just as we do, but they also know that Israel couldn’t care less about them, while Hamas has delivered real achievements. 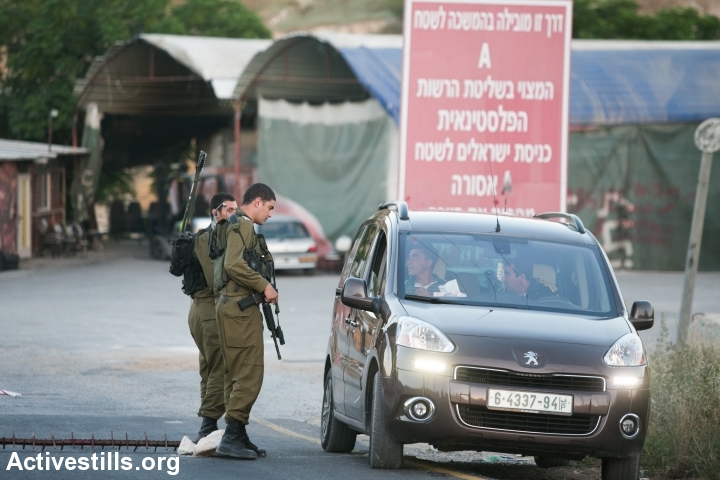 Apart from genuine concern for the kidnapped teens and hoping that they will safely return to their families and friends, the Israel Left should remember today – and remind its fellow citizens – that ending the occupation is in Israel’s long-term interest, both morally and politically. The same system that is now mobilized in an effort to bring the teens home – and rightly so – is the one that deprives Palestinians of their most basic freedoms on a day-to-day basis. It is the same military and political system that evicts people from their homes, expels, locks them up, tries civilians in military tribunals – if it bothers to try them at all – locks up political activists for weeks, months and years at a time, and at times also kills. And it has done so for Palestinians of every age and background, for decades.

Even more importantly, it is time Israeli society respected those people who are trying to free their countrymen with diplomatic measures or through grassroots activism around the world and in Palestine, and not just those who blow up buses or kidnap Israelis. Consider Israel’s indifference to the mass hunger strike by administrative detainees – i.e. people who are imprisoned without trial – and compare it to the handling of the Schalit kidnapping, which resulted in the release of some 1,000 convicted prisoners. And let’s admit this: Israel will consider whoever is behind the latest attack a way more “serious” actor than it will those who have devoted their entire lives to making peace with us. And there are many of them – one just needs to open his/her heart and mind to see them.

The difference between these two scenarios is this: those in Israel who believe in a settlement with the Palestinians are offering a distant future in which peace could come, while the rest advocate eternal war, assuming that we can win all battles till kingdom come, and regardless of the price paid on the way.

Read More on the West Bank kidnapping
Derfner: The kidnapping is indefensible – but Israel helped provoke it
Zonszein: Israelis aren’t the only ones facing national tragedy
Omer-Man: How Israel taught Hamas that violence is effective