In Hanukkah, we tell the story of a small, powerless people who, with religious zeal and courage, led a bloody guerrilla campaign against an occupying force and corrupt elite to assert control over the Temple Mount. 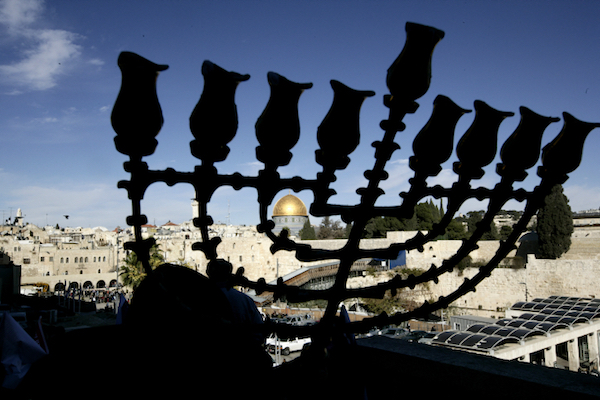 Illustrative photo of a hanukkiah in front of the Aqsa Mosque compound in the Old City of Jerusalem. (Abir Sultan/Flash90)

On Christmas Eve, Jews around the world began celebrating the eight-day Hanukkah festival. Family and friends will gather every evening before the hanukkiah, the nine-pronged candlestick, reciting a short prayer and lighting its candles. Each day, another candle is lit until the hanukkiah radiates in its full splendor on the last day. While the festival is very popular, it is, religiously speaking, secondary, as it does not even have an Old Testament origin. The fact that Hanukkah is so highly valued, despite lacking scriptural justification, can be comprehended as a cultural fact, beyond just the delicious seasonal menu like latkes and doughnuts: in Europe and the U.S., the Festival of Lights is, a child-friendly Christmas substitute for Jews living in secular, Christian-dominate societies. But in Israel, Hanukkah is a different sort of cultural fact. It is a piece of Zionist culture, and thus its celebration focuses on the early rebellion against the Greek occupiers and their achievement of Jewish independence.

In spite of these different receptions, there was until recently a consensus about the original story behind Hanukkah. In the second century BC, the evil Greek King Antiochus wanted to dissuade the Jews from their religion and tried to forcibly bind them to Hellenistic culture. He forbade circumcision and marking the Sabbath, and he desecrated the Temple. He was supported by corrupt Jews who betrayed their people, all for a gymnasium and a bathhouse. But pious and courageous rebels gathered around Mattathias ben Johanan and his son, Judas Maccabeus, to resist and expel the Greeks from the land and to rededicate the temple (“Hanukkah” means “dedication”). The eight days symbolize the divine miracle which was said to have followed the successful uprising. On the day the Temple was liberated, there was only one small oil jug in the whole of Jerusalem — enough to feed the holy fire of the Menorah for a single day. That the flame miraculously burned for eight days, until new oil was delivered, explains the length of the feast — and the oily Hanukkah food.

Historically, however, this story does not hold up. Thanks to new archaeological findings and comparative historical research by important scholars of antiquity, such as Steven Weitzman and Sylvie Honigman, the history of the festival can now be considered rather differently: King Antiochus Epiphanes the Fourth from the House of the Seleucids, a successor of Alexander the Great, was not involved in religious persecution nor temple devastation, like most of the Hellenistic and polytheistic empires. Instead, Hellenistic culture and rule tended to integrate locally venerated deities into its systems of beliefs. In fact, the uprising of the Jews was not a reaction to the invasion of the Seleucid military to Judea, but rather its trigger. The faithful Maccabees did not rebel against cultural conquest, but rather against a tax reform with which the Seleucid Empire wanted to squeeze revenue from its subjects, thereby financing its war against the Romans. In order to realize this policy, King Antiochus put pressure on the high priests in Jerusalem to help him in the exploitation of the people. The high priests, however, were not forbidden to continue their ceremonies in the temple.

Historian Sylvie Honigman explains how this power struggle about taxes, subsequently portrayed 60-70 years later in the Books of the Maccabees (the basis of today’s Hanukkah story), came to be seen through the lens of religious struggle. In Babylonian-influenced cultures, which also included Palestine, the struggle to establish a new royal dynasty was narrated by court historians in the aftermath as a struggle about the correct execution of religious ceremonies. Misconceptions could thus have arisen as the story was not initially framed primarily as a political uprising, but rather as a cultural conflict. For example, Greek soldiers in Jerusalem, who followed their polytheistic belief system and wished to pay tribute to the local Jewish god, could have aroused suspicion among the population for violating the holiness of the temple.

Even if the aspects of religious oppression were invented after the fact, Seleucidian military repression was very real, and the insurrection is justly recalled as a successful anti-imperialist uprising, considering that as a result the Jews won political independence. This changed only with the Roman occupation, more than a century later. After the destruction of the Temple by the Romans in 70 AD, the Hanukkah festival gradually lost its importance. Hundreds of years later its significance shifted from the memory of a man-made military victory to the celebration of the divine oil miracle. This better suited the spirit of the Talmud, to which the idea of Jewish statehood was alien.

It is ironic that the rituals of that festival, which actually mark the preservation of Jewish religion despite foreign influences, gave way to pagan traditions, resembling the Roman winter festival, Saturnalia. The oil miracle myth, which only appeared in 400 AD, served as a corollary to the seasonal, pagan-inspired candle-lightning ceremony. The dreidel spinning top, with its four sides, carries the four letters N, G, H, Sh, which signify the sentence: “A great miracle happened there.” This originates from a medieval gambling game. And the “Hanukkah-gelt” (gifts of money) given to children are a modern custom introduced to compete with the gift-giving of Christmas.

Early 20th century Zionism was the most recent agent which re-signified Hanukkah, making use of this history of Jewish rebellion for its nation-building purposes, to ironic effect. During this time, “Maccabi” sports clubs were founded all over Europe, and the Jewish Olympic Maccabia Games, named after the rebel hero Judas Maccabeus, were held. These served as a symbols of “muscular Judaism,” which aimed to refashion the image of weakened European Jews into one of strong, manly athletes. But considering that, according to the Book of Maccabees, the rebellion was directed among other things, against the building of a sport hall in the vicinity of the the Temple, it is a great irony that modern Zionist body culture adopted the name of a Jewish rebel fighting against the existence of a gymnasium..

Nevertheless, perhaps the greatest irony lies in the contemporary political situation. With the Hanukkah celebration, we remember the story of a small, powerless people who, with religious zeal and great courage, led a bloody guerrilla warfare campaign against a militarily superior occupying force and a corrupt elite in order to assert control over the Temple Mount.

A few years ago, the inhabitants of the Palestinian village of Bil’in revivified the spirit of the rebellious Maccabees. Together with Israeli peace activists they celebrated the Hanukkah festival in protest of the robbery of their olive groves by the building of the separation barrier and the settlement Modi’in — itself curiously named after the birthplace of the Maccabees.

In fact, there are many similarities between the Maccabean rebellion and the Palestinian uprisings of the past several years, which began in part in the wake of provocations by Jewish extremists on the Temple Mount. Mainstream Israeli culture, which understands itself as Western and enlightened, is analogous to the similarly self-regarded cosmopolitanism of Greek-Hellenistic culture, while contemporary religiously induced Palestinian nationalism finds its parallel in the rebellious Jews. And even the heroic Maccabees, with their religious zeal, forced circumcisions and destruction of idolatry, seem from today’s perspective to look more fanatical than even most Islamic groups in Israel/Palestine. And the central importance of the Temple Mount in the history of Hanukkah, considered alongside the concern of Palestinians with the fate of Al-Aqsa Mosque, located on the historical site of the Temple, presents another striking parallel.

The fact is that Hellenistic repression was not meant to be an attack on Jewish religion, but nevertheless came to be seen as such following the conversion of history into nationalist mythology. That many Palestinians explain the protection of Al-Aqsa Mosque against an alleged or actual Jewish threat as the main motif of the current uprising, while at the same time making the miserable conditions of life under Israeli military occupation appear secondary, eerily echoes the revisionist interpretation of the original revolt against taxation into a religious war.

When we light the candles in our hanukkiah again this year, let us remind ourselves occupation necessarily spurs insurrection. What version of history the oppressed decide to tell is a different story.

Yossi Bartal is an activist and writer based in Berlin. The article was first published in German in the daily newspaper ‘Taz’ and translated by the author.