What happens to a social justice movement when armed warfare gets in the way? Why the still unconfirmed identity of those responsible for Thursday’s attack is problematic and what is fizzling on Rothschild Boulevard? Rechavia “Rick” Berman gives you the week’s top stories as they ought to be told.  A new weekly feature on +972 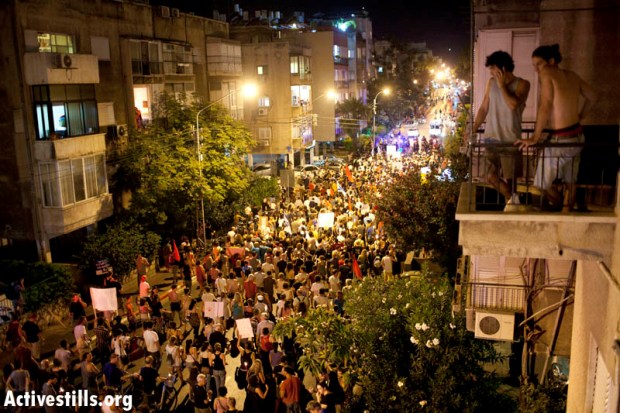 Shhhhh…step right this way, the Weekend Wrap tour will be leaving as planned, just be very quiet. If you’re very quiet you can hear the other shoe drop. In any case, be quiet, cause people “shootin’ guns and shit,” as the great Eddie Murphy once put it. And in these parts, when people be shootin’ guns other people gots to be shuttin’ the fuck up about whatever else they’s talkin’ ’bout at the time. It’s a local thang.

Bibi Netanyahu got the security-related distraction he wanted in spades, when parties as yet unknown committed a series of coordinated attacks in the city of Eilat in Southern Israel. Eight people died, two of them soldiers and the rest civilians, in a combination of rocket, gunfire and bomb attacks.

Even as all the commentators agreed that this carries the signs of jihadi and salafist groups well to the batshit side of Hamas, based in the Sinai and not in Gaza, Israel determined that timeliness is far more important than actual connection and designated the Hamas-created popular resistance committees in Gaza responsible for the attack, taking out that organization’s top echelon pretty much completely. And the fact that these attacks were almost certainly carried out by organizations at war with Hamas in the Gaza Strip? Organizations whose only hope of any real achievement is by heeding Sun Tzu, who said that the best is to foil the enemy’s plans, the next best is to foil his alliances, and only after that comes defeating his forces in the field? Never mind all that! Must look resolute and appear to be pro-active!

So they provoke Israel into attacking Hamas through Egypt, and now Israel’s fragile cease fire with Hamas is over, and its fragile peace process with Egypt is shaken after Israeli retaliation hit and killed Egyptian forces, who were caught in the crossfire (as meticulously planned by the attackers).

So lets recap: groups even more radical and violent than Hamas, who are vying with Hamas for control of the Gaza Strip and with Egypt for control of northern Sinai, managed to get Israel, the Hamas and Egypt shooting and shouting at one another.

Also, it didn’t take long for the limitations of the Iron Dome to be exposed, as within the first three days of shelling two improved flying pipe bombs got through the defensive rocket system and caused casualties.

Also, the General Security Service (Shabak) wasted no time in making it very clear, very loudly that they had given the army very detailed and specific information of the impending attack. But remembering Clinton trying to take out Bin Laden back in ’98 and getting blamed unfairly for wagging the dog? I should shut up about the obvious thoughts pursuant to the above intelligence.

But hey, at least Bibi got the attention nicely and fully off the social justice protests. One has to wonder if that’s not a blessing in disguise for a protest that was still dealing admirably with the obstacle course the establishment was throwing up, but was at the same time beginning to show some significant fissures.

Of course the greatest fissure of all was starkly shown once the boom boom began. The lie was flatly put to the story that the majority of the tent protesters were some sort of radical left, when the decision made in the face of the terror attacks was classic mainstream Israel: Quiet – they’re shooting. Nevertheless the protesters made no sign of yielding the stage completely or for long, and held a 5,000-strong “silent march” in solidarity with the victims, after which the “radical left” (activists for Arab-Jewish communist party Hadash) wouldn’t shut up about the shootings going on and got yelled at for “ruining it for everyone else.” Meanwhile there were similar small demonstrations around the country.

Before Netanyahu got his rally the troops moment the leaders of the protest (who are dealing increasingly with “um, who elected y’all to speak for me” sentiments) responded to Bibi’s creation of the “Trachtenberg Committee” by forming one of their own – twice as large as the government committee they complained was too large…

The Trachtenberg Committee is headed by an economist named Manuel Trachtenberg, who is known for pro-social views. That said, and regardless of the unclear extent of Trachtenberg’s ultimate influence, the Director of the PM’s Office Eyal Gabbay was bluntly honest with the protester delegation, informing them that “this government will not be the one to transition to a welfare state” and that the road to get the demands posed by the protests met is through the ballot box.

Schweppes drew a lot of ire for placing a sample-tasting booth in the middle of the tent encampment on Rothschild Boulevard. Other commercial exploitations were popping up as well.

So the most critical week for the #J14 protest, now significantly torn on the war issue (stop me if you’ve heard this before…) has passed, but for the moment it is still there, which is more than anyone would have believed 5 weeks ago. How’s that song go? “…gave proof through the night that our flag was still there…”

And on that starry-spangly note, that’ll do it for the current installment of this fine and educational feature. The Weekly Holyland Wrap is not responsible for any illusions, sympathies or misconceptions that may have been misplaced on our tours. Please collect your senses and check your comments where appropriate. Thank you for flying the crazy skies.