Welcome, one and all, to the Weekend Holyland Wrap. No, you cannot take your haz-mat suits off. There’s still Schalit Fever in the air. And smoke. And keep those helmets on. They’ll be needed too. This here is the extreme tour version. | Raging Rechavia “Rick” Berman gives you the week’s top stories as they ought to be told. A weekly feature on +972

So “the boy*” is back in town. By now, if you read this most excellent and informative website I have the privilege to share space on, you have heard all about Bibi adding a new facet to his legend: Photo-Bomb Bibi! To those who rely only on these demented and bemused dispatches to keep abreast of the goings-on in this lil’ piece of heaven (and woe are you if you do exist) – Bibi couldn’t conquer the urge to shove himself into the frame of the father and son reunion. At least he could truthfully claim that he didn’t give false hope… 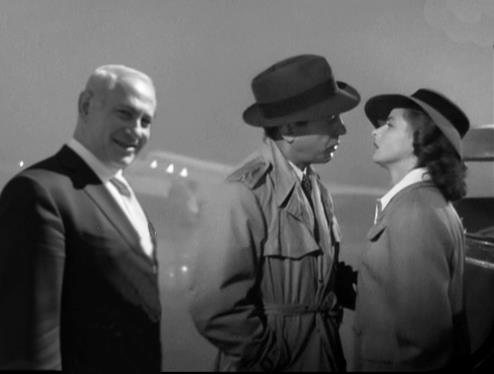 One of many examples of Bibi's new impact on the world

The major media outlets all signed a pact to leave the boy alone for ten days – and then promptly ignored it and breathlessly reported his every move: First walk, first bike ride, he’s eating spaghetti, it’s a bird, it’s a plane…. sheesh. I mean no one could produce this as a spoof cause it would be killed as too overdone. Not just the first day, either, but throughout the long holiday weekend.

I hope that as soon as the noise dies down, the young man will find his way down to Tel Aviv and sow some pent-up wild oats till he’s had his fill. Maybe France (where he’s a citizen) would be an even better choice. What’s French for “I’ve been saving the lovin’ of 1900 days for you, baby”?

I’m not gonna burden you with the new songs hastily churned out for the festive occasion, and the old ones that got an updated final stanza… just thank me that you were spared. Gaza is reported to have made its contribution to the outpour of instant culture with a sudden fad of “Gilad Schalit Shirts” – this (um, no offense but fugly) shirt Hamas had Schalit wear when he was released. I KNOW those Geneva Conventions have something to say about that…

As for the deal itself, in addition to what I already had to say last week (and which was seriously misconstrued, sadly), I will say that Israel erred seriously in releasing people already released in previous prisoner swaps. That should be a rule. Seriously. Makes the whole thing look utterly ridiculous. Of course if Israel really wanted peace, its occupied Palestinian prisoner population would be down to maybe a thousand, if that. That’s a whole other discussion.

Finally, this just in: Bibi trying to milk one last bit of juju from it all, formally announcing the end of “two weeks of elation and unity”, saying “We’re going back to work!” Um, no, wait, we like it when you “work” less…

Political mastermind Tzipi Livni decided she’d play the only card she could claim as her own, and said that “out of respect to Daddy Schalit, I didn’t speak out till after, but it was a horrible deal and I wouldn’t do it.” (Glancing…) And Tzipi’s hold on first-place in the “worst opposition leader” is as firm as ever.

This, by the way, represents the absolute extension of my rule about the whole affair. Once this goes up, anyone running the words “Gilad Schalit” for like a month at least I’m gonna stuxnet their ass. Anthrax too. Whatever it takes. We shall overcome.

On to other issues:

There was a pretty big forest fire in the Galilee. I’d write it off to an accident, due the dryness and all, but it was only the largest of like five that popped up, “accidental”-like. Burned down some lovely natural old-growth woodland too. I understand people wanting to lash out violently at the state, the establishment, whatever. I don’t understand people who do that.

Throwin’ down on lefties is a budding sport here in the land of bilk your money. In addition to violent treatment of the remaining social justice protesters, after the milder beat-down at Anatot, there was this brutal attack against activists helping Palestinian villagers pick their olives. This unfortunately does not capture the blunt force trauma to the head sustained by one of the protesters. Google translate should give you an amusingly skewed idea of the gist of it.

A bunch of female soldiers left a holiday party on base after being ordered to take their skank sinful ewwwwitsagirl selves to a sealed-off, partitioned area some 55 yards away, so “people” (“Anashim”, as opposed to women, or “nashim”) would be able to party with a pure heart and not see them. What they were doing prior to being dismissed from paradise was dancing (it was the “Torah Festival”, which as close as Judaism comes to a good rave) – in a women’s only circle, separated by the length of a long bench from where the men’s circle was stompin’ in pure devotion. This wasn’t enough for the fundies. The battalion rabbi pulled rank and ordered the offended female soldiers away to the quarantine, so a hundred of them simply left the party altogether.

And we’ll end with two exemplars of social inequity, one blatant and one more subtle. The Labor Relations Court ruled that if you didn’t know you were eligible for some of your social security for a few years – tough. You can’t collect it retroactively. Not even without interest. The Social Security Administration can simply neglect to inform you of your rights, set a one year period of limitations, and stiff anyone who wakes up a year and a day after the fact. This was not an aberrant decision by some rogue judge. This was a panel with the Labor Court Chief and her #2 presiding. State to Working Stiffs: Drop Dead.

Meanwhile, a criminal district court sentenced a dude named Tal Mor to 12 years in prison. Now Mor was convicted of a very bad thing – running over a cyclist and fleeing the scene while the guy died. Definitely deserves prison (if he did it; there’s some controversy). However, when seriously connected star attorney Dori Klegsblad killed a mother and a child (true, he didn’t try to run, but he did ram a stationary car waiting for a green light so hard that both occupants died. His Yupmobile urban tank, of course, sheltered him from any physical consequence) – he only got convicted of “negligent recklessness,” was sentenced to 15 months and served eight. Months. Anyway, while in the Klegsblad case the perp was the celebrity, in the Tal Mor case it was the victim – Shneyor Cheshin, son of former Supreme Court Justice Mishael Cheshin (quite a nutcase, but by far the most fun to translate on the bench. Maybe ever).

Anyway, Shneyor, may his soul rest in peace, was apparently a hell of a guy, and many others, beyond bitter-and-conspiracy-liking me, have commented upon the impact of the victim’s identity on the prosecution and sentencing. Hotshot lawyer kills poor immigrant woman and her son? Easy does it. Stoner kills a prince of the Elite? Gimme that book to throw at him!

And so it goes. If Gilad Schalit were the son of a single-parent immigrant from a former Soviet republic now living in Dimona…

Oh, damn. I did it, didn’t I? Oops… How does one go about stuxnetting one’s own ass?

That’ll do it for this week. The Weekly Holyland Wrap is not responsible for any illusions, sympathies or misconceptions that may have been misplaced on our tours. Please collect your senses and check your comments where appropriate. Thank you for flying the crazy skies.