Who can guess the name of a new political party to emerge in Israel? Why weren’t trains running last night and why an Israeli law from 1985 stands between Israelis and democracy. “Rick” Berman gives you the week’s top stories as they ought to be told. A weekly feature on +972 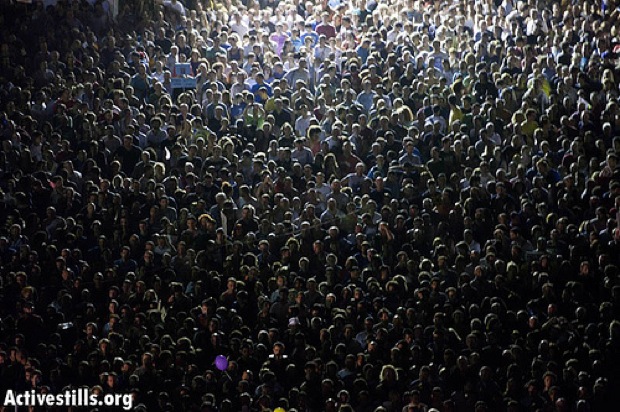 Well, that was quite impressive. Regardless of actual numbers (and I personally doubt that there were more than 250 thousand people in Tel Aviv yesterday, but I could be wrong), it was a whole lotta people showing a whole lotta faith and hope – and that may be the problem, eventually.

Since the beginning of this most justified and impressive protest movement, I’ve been struggling to understand why, unlike most of my politically like-minded friends, I have not managed to be swept up in the hope and faith. Was it my personal poverty and debt-driven depression? Was it the recent, soul-crushing disappointment in the “hope and change” of the President of my other homeland, Barack Obummer? Was it the fact that I could see no visible path to translate all this energy into concrete political change, due to the lack of any leadership both willing and capable of doing so? Was it the gnawing fact that for all the truly spontaneous ingathering of tens of thousands around the country, the actual initial organization of these protests (with huge stages costing five or six figures easily at each march) was too well funded to have sprung up from the foam on the half-shell and no detailed account has been given as to who was footing the bill? I’m still not certain, but despite having been there last night, having marched the two miles and having stood in the sea of hopeful and well-meaning people, this subjective feeling has not changed.

It is obvious that the current government will not change a damn thing, despite words to the contrary by its various members. “Prime Sinister” Bibi Netanyahu will not, as his chief of staff Eyal Gabbay flatly informed the protest leaders, give up his pet projects, such as slashing corporate taxes to the lowest rate in the OECD, handing out the nation’s land to developers free of pesky zoning and environmental hurdles, or pouring cash into the settlements at the expense of places inside sovereign Israel. Even the “left leaning, socially-inclined” Prof. Trachtenberg, who heads the inquiry committee formed to placate the protesting masses, has stated that he will not recommend “breaching the limits of the budget”. So what, pray tell, is the motherfucking point of the exercise? The current budget, also known as “the document that says who gets what”, is the reason the protest began in the first place.

Not that budgets, or laws passed regarding expenditures, really mean anything in Israel. See, we have this thing called “The Arrangements in the State’s Economy Law”. Originally passed in 1985 as a very draconian (and wildly successful) emergency measure to combat hyperinflation (400% a year at the time) and is since renewed every year (with lightning speed, precluding any and all possibility of true parliamentary oversight of its contents) concurrent with the approval of the actual budget. What it does, simply put, is nullify any parts of the democratically passed budget and of related laws that the Finance Ministry paper pushers don’t approve of. Sovereignty of the elected legislature? Don’t be childish. Thus, just as one example, a law from 1985 mandating free childcare from ages 3-5 (for which parents pay thousands of shekels a month) has been stymied anew every year to this very day. I, for instance, would be in infinitely better shape financially right now had I not been forced to pay those sums for both my kids. But I don’t count.

No change is even remotely possible without annulling this democracy-mocking law, and that ain’t gonna happen under this government – or any other that I can see being elected. The one government that did go one year without it (Rabin’s government, in 1994) quickly yielded to the treasury boys (who view civil service as a bouncing board to lucrative work for various tycoons), and restored it the following year.

Now, under normal conditions, there would be a simple solution – wait about 18 months for the scheduled upcomin’ (as Pappy O’Daniels would say) and replace the porcine-capitalism-loving Bibi with someone who will actually fix the situation. However, there doesn’t seem to be anyone that fits the bill. The main opposition party, the only one projected to have any chance of forming an alternative government, is Kadima – which is even more porcine and more corrupt than Bibi’s Likud.

Labor chief candidate Shelly Yechimovich? Well, for one thing, Labor will be lucky to make it to double digits (which in a 120 seat Knesset, won’t even give you the Treasury in a coalition, much less make you the actual decider). Second, in her short political career, Yechimovich has shown that she will never hesitate to sell out ideals for cynical political calculations. Just as she has renounced any and all support for ending the cancerous occupation, so will she not hesitate to sell out economic and social reform in favor of cozy relationship with fat-cat donors and “hard headed realism.”

So that leaves us with a hypothetical new party, that will come “out of nowhere” and galvanize all the many people who have so clearly expressed their desire for a deep change in priorities. And what do you know? With or without any connection, there is precisely such a new outfit in the works, known as the “National Left”. This new group is headed by a playwright famous for anti-clerical plays and a very unfunny political-satire TV show, a former hatchet-man for Ehud Barak who claims to be born again and disgusted with his former self (I am not sold, myself), with wildly successful, deeply ignorant and viciously “free market” TV anchor and weekend columnist Yair Lapid, son and ideological doppelganger of economically right-wing late politician Tommy, waiting in the wings. Anyone who thinks this is the group that will bring back the welfare state has their head up their ass.

So as far as I can see, there is no realistic avenue by which this outburst of disgust with the current system gets translated into any sort of meaningful change. My friends talk about a fundamental “change of discourse” and so on, but without actual change happening, this will, I fear, merely rot into anger and disillusionment with any sort of peaceful political change. Thus, the next time this impossible repression and exploitation leads to an explosion of anger, it will not be couched in tents and witty slogans, but in blood and shattered glass, in flames and fury. And much as the savage side of my heart may secretly yearn for such an outlet, the brain still knows it will hurt more than help.

So much for the #J14 uprising, which is now expected to wind down, with the tent cities folding in the coming days.

And now to a few short dispatches, on the protest and other matters:

•The Israeli Railways Authority announced a service stoppage for infrastructure repairs last night, which by total coincidence prevented people from some areas from traveling to protest marches last night.

• Journalists at Israel’s State TV have revealed that during the previous mega-protest (the 300K one, 3 weeks ago), they received calls from the PM’s office telling them to stop reporting the number of protesters in the streets.

•As if Bibi didn’t have enough trouble with the protests, his mentally ill wife, who refuses to take her meds (not being flippant here, this is the simple truth), got him into trouble again. Turns out she put up her dying 96 year-old father at the PM’s residence, and by all appearances was paying his private nurse out of the residence’s publicly funded budget. That’s not what got her in trouble though, but rather, once again, her habit of abusing the help. The nurse, a Nepalese foreign worker, accused “Mrs. Sarah Netanyahu” (as she insists on being addressed and referred to) of attacking her, causing her to fall and gash her chin. This of course is not by any means the first time the lady has gotten into trouble for her manner with the plebs who do her dirty work. One such case is pending at court as we speak, something about non-payment of wages, emotional abuse and throwing shoes at her maid’s head. Such are the joys of life under an imperial family.

•I had more to say, including about the terror attack in south Tel Aviv, where a Palestinian attempted to run over kids at a summers-end party – something I fear is but a harbinger of an impending spate, what with the whole PA “statehood” bid (a state that doesn’t even control its own population registry. ’tis to laugh), but the deadline is here and I need to rush and get my kid, since this year we can’t afford the after-school program that allows me to work in peace and quiet until 16:00.

This dispatch has been brought to you courtesy of 972 Magazine and The Weekly Holyland Wrap, which is not responsible for any illusions, sympathies or misconceptions that may have been misplaced on our tours. Please collect your senses and check your comments where appropriate. Thank you for flying the crazy skies.